Yesterday morning I woke up in the camper van with a pain on the inside of my upper right arm. It felt like a bad scratch but I could remember no injury. Closer inspection revealed a tick. Normally ticks itch. They don’t burn like a deep scratch. It pulled off cleanly, but a day later the spot is still red and sore to the touch. This will bear watching. 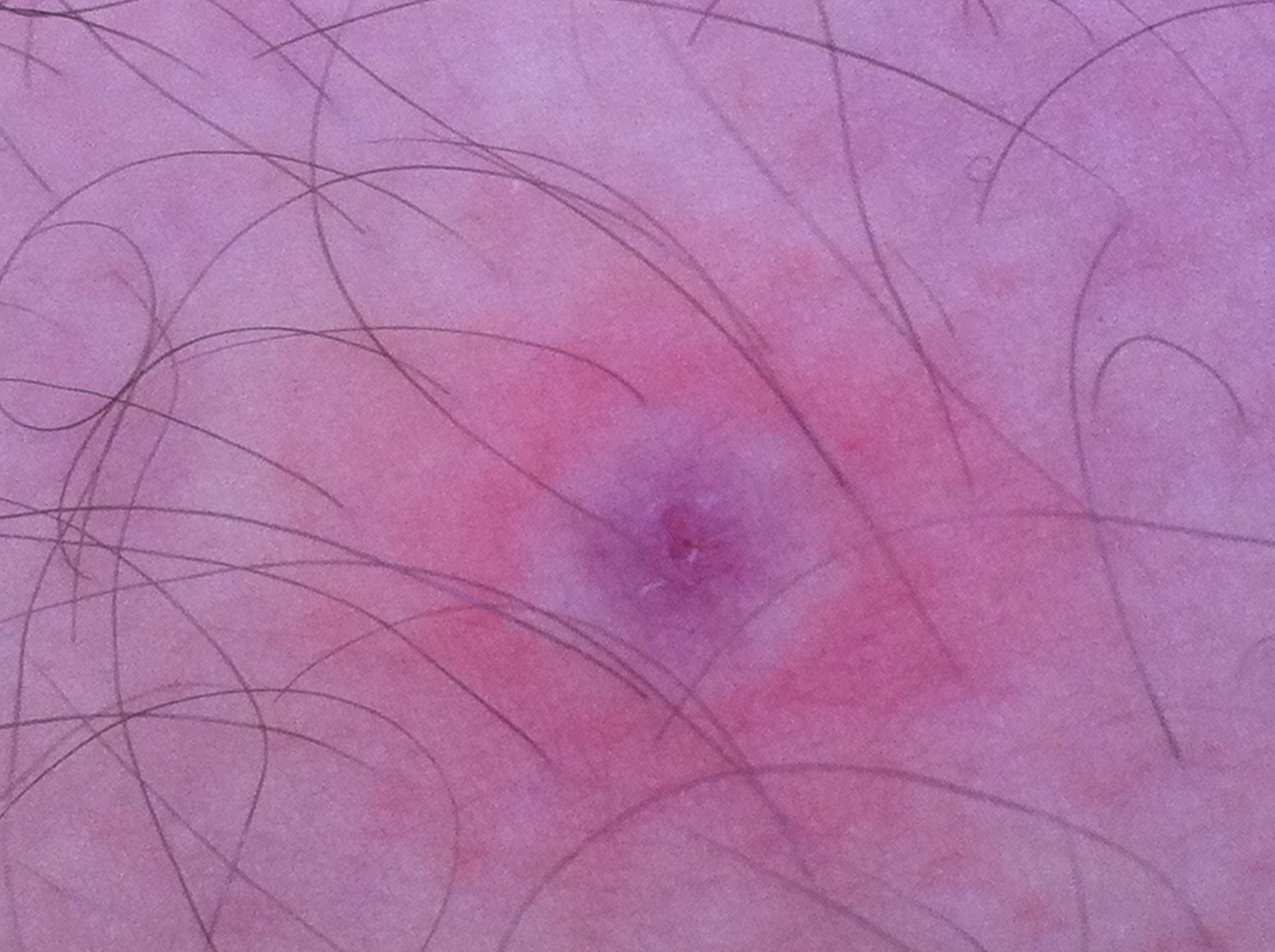 BITE SITE — Tick bites like this one are a warning sign that you had better have a doctor look at it. (Image courtesy Gerald Klingaman.)

I know ticks are somehow part of Nature’s grand plan, but I wish she had planned differently and left them out of the grand scheme. Complaining about ticks and the assortment of diseases they transmit probably seems wimpy to people who live or have lived through the scourge of mosquito borne diseases – everything from yellow fever to malaria – but here in the Ozarks ticks are more problematic than mosquitoes. So, complain I will.

There are 19 species of ticks in Arkansas; 16 are of the hard-shelled variety and three are soft-shelled. It is the hard ticks – the Lonestar tick, the black legged tick (also known as the deer tick), the American dog tick and the imported brown dog tick – that are the most commonly encountered, and most commonly implicated in spreading disease.

Anyone who has spent any time out of doors in Arkansas probably has experienced a tick bite. Ticks have four life stages: eggs, larvae, nymphs and adults. Ticks implicated in disease spread are three-host species, meaning that before moving to the next stage of development they must drop to the ground and molt before attaching themselves to another host. This coming and going between hosts is what makes them especially effective at picking up bloodstream pathogens and transmitting them to uninfected hosts.

Seed ticks represent the larval stage of the tick life cycle. They are newly hatched from the eggs which are laid in the leaf litter on the ground. After emerging, the larvae climbs up a twig or a blade of grass and patiently awaits a passing animal or hiker. Seed ticks are tiny, ranging in size from 0.5 to 1.5 mm in size, or about the size of a poppy seed. These tiny ticks only have six legs, whereas nymphs and adults have eight. Ticks descend from mites, which are not true insects, lacking six legs. When you stumble into a patch of grass infested with seed ticks, you seldom come away with just one. Fortunately, because seed ticks have not yet had a blood meal, they are not thought to be associated with disease transmission.

Everyone who spends time out of doors has a tick horror story to tell, oftentimes with harrowing details about some illness they or a friend had to endure. The illnesses usually involve high fevers, bad headaches and strange rashes, sometimes associated with swelling and joint pain. Interestingly, just over half of the people diagnosed with tickborne diseases don’t remember being bitten. There are almost two dozen kinds of tickborne diseases with most of the bad ones being bacterial, although viral and protistal forms are also out there.

Arkansas is a hotspot for three diseases; ranking first amongst states for tularemia, fourth in Rocky Mountain spotted fever and tenth in terms of Human Monocytic Ehrlichiosis (HME). Lyme disease, especially prevalent in the northeastern and upper midwestern states, is in Arkansas but getting an accurate diagnosis acceptable for the U.S. Centers for Disease Control requires a tricky, two-phase test. In fact, because there are so many potential tickborne diseases, getting accurate and timely test results can be problematic. Oftentimes, physicians prescribe antibiotic treatment based on symptomology, only getting confirmation after the fact.

The CDC records the number of confirmed cases of diseases reported but only a fraction of the cases – or suspected cases – get reported. On a national level there were 274 cases of tularemia in 2019, with 94 of these in Arkansas. HME had a report of about 2,000 cases on a national basis with Arkansas amongst the highest reporting states. There are about 6,000 cases of Rocky Mountain spotted fever reported annually, with Arkansas having more than 15 cases per year.

The CDC gets about 35,000 reports of confirmed Lyme disease cases per year, but has estimated the number of actual cases at about 300,000. But by inspecting insurance claims records, they now believe the number to be about 476,000 cases. Thirteen probable cases of Lyme disease were confirmed in Arkansas in 2019, but the actual number was probably approaching 200.

Early treatment of tickborne diseases is important because they are relatively easy to knock back in the first week or so after an infected bite. But if the bacterium is allowed to settle into the system it can lead to a long-lasting chronic condition that can affect the nervous system, joints or even the heart. My red spot bears watching.