My travels during the week took me from the north rim of the Grand Canyon to a “cabin” in the woods just below the Mogollon Rim in northern Arizona where Whinny and I spent the weekend with my brother and his wife at about 6,000 feet in the cool, clear air. The holiday visit was planned but the dented and leaking transmission oil pan was not. Probably hit a rock in one of my back-country adventures. 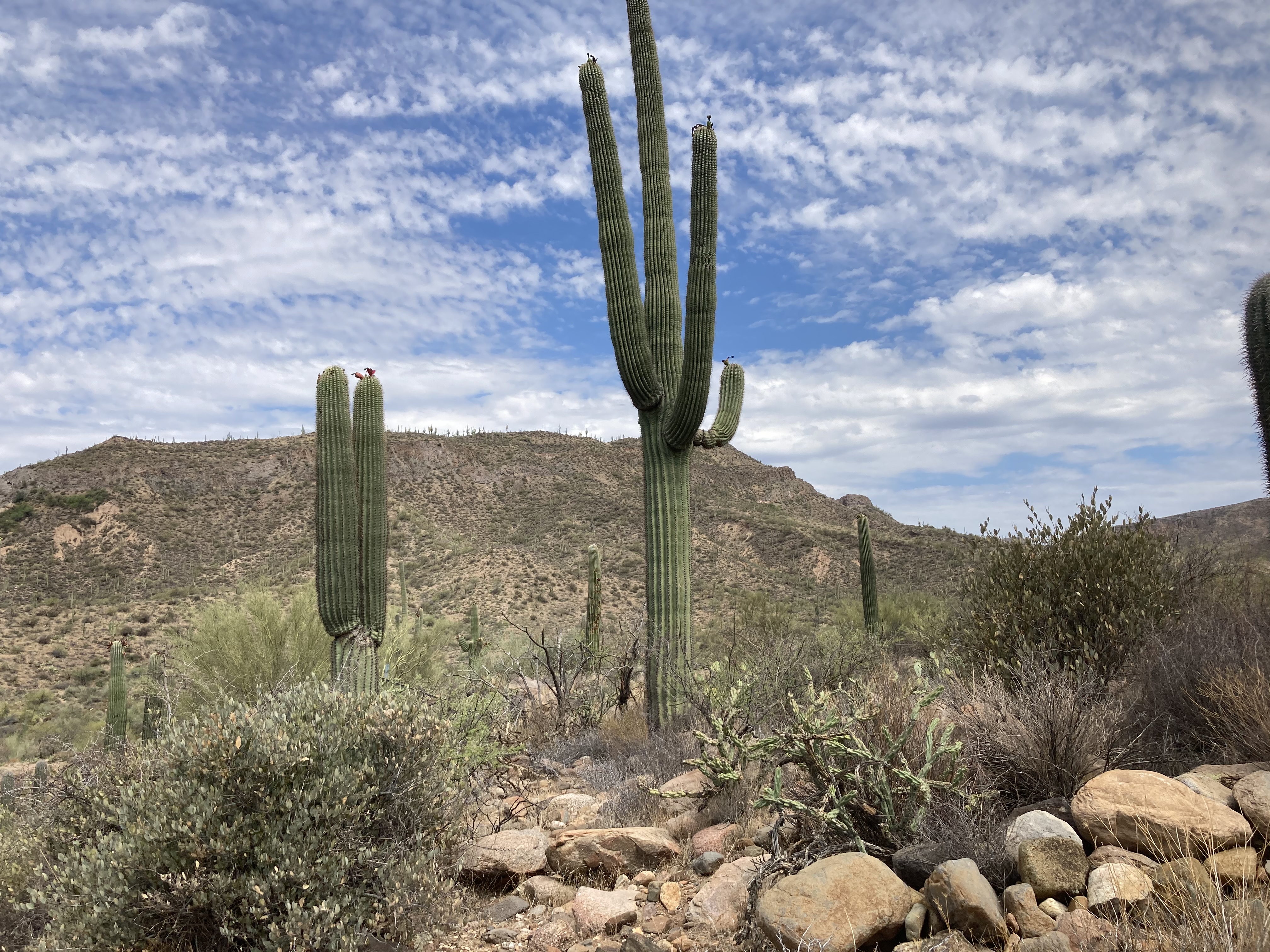 LOWLAND INHABITANTS — Once you leave the high country of northern Arizona, the lowland desert is dominated by cacti, such as these saguaro and opuntia, and other drought adapted plants. (Image courtesy Gerald Klingaman.)

The Mogollon Rim is the southernmost expanse of the Colorado Plateau, which I have been traversing for the past several weeks. On Saturday we drove off of the rim into the valley below, going from comfortable 70-degree weather to a blazing 105. But, as they say, it’s a dry heat.

I had been encountering cacti (all were species of Opuntia) on my hikes around the Colorado Plateau, but when I dropped into the desert floor of Arizona, they took on a whole new dimension. Instead of sprawling clumps hiding in the undergrowth, cacti became a dominant feature of the landscape. Most noticeable were the saguaros (Carnegiea gigantea), the iconic armed cacti featured on the Arizona license plate.

The saguaros usually stand 30 feet or so tall with a few too many arms and dominate the lower hillsides where temperatures seldom get below 20 degrees in the winter. Hunkered around them are chest-high Opuntia species that provide a more impressive display than the sprawling kinds I had been seeing in the high, dry interior of the Colorado Plateau. Some southern Arizona counties have as many as 50 species growing there.

These cacti are new to this country. Well, relatively new. Because cacti fossils have never been found, there has been considerable debate about the evolutionary history of the cactus family. Current speculation is that the family had its beginnings about 30 million years ago in northern South America when that region saw a drying trend as the Andes Mountains began to rise. Diversification of form reached its peak between 5 and 10 million years ago, when drought became a dominant feature as the Andes reached their full height and desertification took hold.

Interestingly, it was not until about 5 million years ago that an offshore island — now we call it Panama — was shoved into the gap by tectonic forces between North and South America and cacti arrived here. When this land bridge was in place all manner of plants and animals migrated onto the new landmass. Because much of Central America, Mexico and the southwestern region of this continent were xeric, cacti proved especially well-suited for the new homeland.

The two major divisions of the cactus family are the true cacti (about 75 percent of the 1,750 known species) and the opuntia (most of the rest). It is not clear to me if the opuntia migrated first into North America and picked up freeze tolerance along the way, or if the true cacti just lacked the genes for freeze resistance. At any rate, the opuntia spread throughout the land and are found in every state and most Canadian provinces, whereas the true cacti are mostly limited to the milder sections of the desert southwest. A few ball cacti have ventured into colder climates, but they are the exception and don’t have the same degree of freeze tolerance as the opuntia.

This period in Earth’s history was a dry time across much of the continent and desert-adapted species, unrelated to cacti, began to appear in Australia, Africa and other arid regions around the world. From the human perspective, five million years is a long time, but it took our species only 10,000 years to go from the rise of agriculture to world domination. Maybe not so long after all.