Salt Fork of the Arkansas River
skip to main content

Salt Fork of the Arkansas River

Salt Fork of the Arkansas River 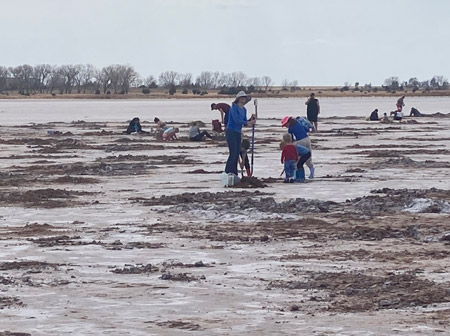 My rambles last weekend took me west into Oklahoma.  A family function – fortunately not a funeral for once – was the main reason for the trip, but while there I decided it would be a good time for a return visit to the Great Salt Plains National Wildlife Refuge.  Located in northwestern Oklahoma near the town of Cherokee — about 120 miles west of Tulsa — the refuge presents an interesting blend of geological and natural history.

The area officially became a protected wildlife refuge in 1930 because of its position as a part of the western American flyway. More than 300 species of birds use the 32,000-acre site as a stopover during fall and spring migration or as a breeding ground. This area is critically important for the endangered whooping crane population that stops by on its fall migration. It is the single most important site for migratory wading shore birds such as sandpipers, bitterns and others.

My rambles in late March had me in the Kansas City area where I stumbled onto Fort Osage, the first trading “factory” established in 1808 on the Missouri River.  There, I learned of George Sibley, the head of the factory, who had good relationships with the Osage. At the time the Osage considered all of the Ozarks, much of Kansas and a big swath of Oklahoma as their territory, including the salt plains region on the Salt Fork of the Arkansas River. In 1811, he made an expedition to the region, becoming the first European to venture into this part of the prairie region. There he found Osage collecting salt and trading with other tribes to cure buffalo hides.

The refuge is divided almost equally into a barren salt flat crusted white with salt, lake and forested area, providing for the habitat needs for all the creatures that call it home. Though the area looks more or less flat, the salt flat is the low point of a bowl, so over the eons salt and other minerals have accumulated. About two feet below the surface of the flat you strike a salty brine that provides the salty solution that is left behind on the surface when water evaporates.

But in this salty substrate a second kind of crystal is formed, one called selenite – basically a crystalline form of gypsum. There is an open season on crystal digging – from April 1 through October 15 – when the weather is warm enough to make mucking around in the wet mud more pleasant and to not interfere with the migration of any of the bird species that stop there. I made my visit on opening weekend and grubbed around with a hundred or so families as they sought these buried gems. 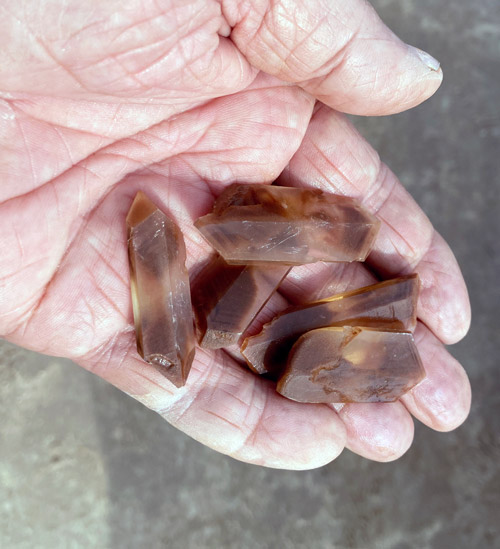 Truthfully these are not the prettiest crystals. Instead of being colorless, each crystal forms with an hour-glass shaped inclusion of brown clay trapped inside the otherwise clear crystal. Once we got the hang of finding them, they were plentiful. On top of the sandflat was a layer of about four inches of sand. Beneath that was a layer of silty red soil. It was in the top few inches of this layer where the crystals formed.

Unlike the lead and zinc crystals found in the Tri-State mining district that formed from minerals welling up from great depths, these form from the concentration of surface minerals being washed into the shallow bowl surrounding the salt flats. Surface evaporation concentrates the brine and the crystals grow.

Most of the crystals were pinkie-finger wide but flattened and about two inches in length and shaped like a stiletto blade. The slightly offset crystal line down the length of the crystal ends in a 45-degree angle on each side of the tip.  A few large ones were the size of my thumb but nowhere near the size of selenite crystals found in a mine in Mexico that were over 40 feet long and weight 70 tons. But, because they were so easy to find and appeared in such abundance, digging them up was a lot of fun.  The families with little children were having similar luck, so a good time was had by all.

Apparently, my trip was a bit late to see any sandhill cranes and at the wrong season to see the pelicans, but the preserve is a place worth stopping to see what species might be moving through the area at various times during the year.