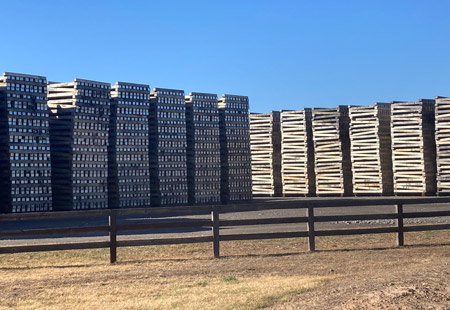 Railroad ties are still a major endpoint for oaks cut from the National Forest, but the forests are now managed for a sustainable yield.  Oak ties are air dried for up to a year before being treated with creosote.

Last summer on my grand western tour I stopped by Promontory Point, Utah, to visit the site where the golden spike was driven on May 10, 1869, when the Central Pacific and the Union Pacific lines finally met, completing the first transcontinental railroad line. Because the trains were gone, I was left to only ponder the track. In a bid to be authentic, the track was laid with hand-hewn ties that can only be described as scrawny by modern standards. My, how railroad ties have changed.

Much of the timberland of the Ozarks was cut over for lumber, including crossties, during the end of the 19th and early 20th century. Stripped bare of its cover, the forest recovered to what we see today, even though it is not nearly so grand as it once was. Railroad ties are still being harvested from Arkansas forest land but at a sustainable rate.

Driving through the Ozarks you are likely to happen upon the occasional sawmill, turning hardwoods into boards or crossties, depending on the kind of tree, quality of the wood and market demand.  Clear white oak logs often end up as barrel staves for Kentucky distilleries or flooring.  Other major uses for oak lumber are for cabinetry and framing for furniture manufacturers.  Another major use of oak lumber turns out to be for flooring in all of those semi-trailers we see running up and down the local interstate.

But for sheer volume, crossties (railroad ties, or in Europe, sleepers) are one of the major endpoints for hardwoods cut from the state’s forests. These sawmills, mostly independent operations, acquire their timber from private landowners and by bidding for parcels of National Forest land rangers have determined are ready for harvest. The U.S. Forest Service develops a multi-year plan for areas to be harvested that considers the impact of forest management plans on the watershed, wildlife, recreational use and the timber industry.

The block size of these parcels is relatively small, usually in the range of a few hundred acres. Notice is given for the letting of bids and, following the well-established bidding procedures, a final bid is selected. Because most of the loggers are small operators, the time to harvest the marked timber extends for three or four years.  When the logs are cut and removed, pulp trucks move in and take away tree tops and wood too small for the mills, for use in paper manufacturing.

Crossties cut in Arkansas will probably end up in Russellville, at Stella-Jones Corporation, a Canadian firm that produces 12 million ties a year across its many plants. The Russellville facility handles both oak, about 75 percent, and mixed hardwoods – primarily sweetgum, about 25 percent. The largest percentage of green ties actually comes from south of the Arkansas River, but they also bring in ties cut from as far away as southern Missouri.  The corporation owns no sawmills, instead buys its timber products from a network of some 1,200 independent sawmill operators across the country.

At the plant the logs are graded, end-plated to reduce splitting, and then air dried, a process that can take up to a year for oaks. After drying the ties are pressure treated with creosote before being bundled and made ready for sale. There are a number of tie grades and main-line railroad lines are understandably picky about what they buy. Oak ties designated “boxed heart” are in the top grade and can be expected to be in service for 30-plus years. But environmental conditions — moisture especially — average usage and tonnage all influence the useful life of a railroad tie.  Depending on the grade, a crosstie currently sells in the $35 to $65 dollar range.

Like all industries, railroads are always looking for new and improved ways of doing things, but wooden railroad ties have remained little changed over the last century and still account for over 90 percent of the track support systems used in the United States. With 3,250 ties per mile of track, the demand for railroad ties will be with us well into the future, so managing our forest resources for sustainable yields of trees is vitally important.