My plans for my summer’s big adventure out west revolved around seeing the mountains. For an Arkansan that may seem odd, for we’ve got plenty of mountains in the Natural State. But out west they have BIG mountains, not the worn down nubbins we know. 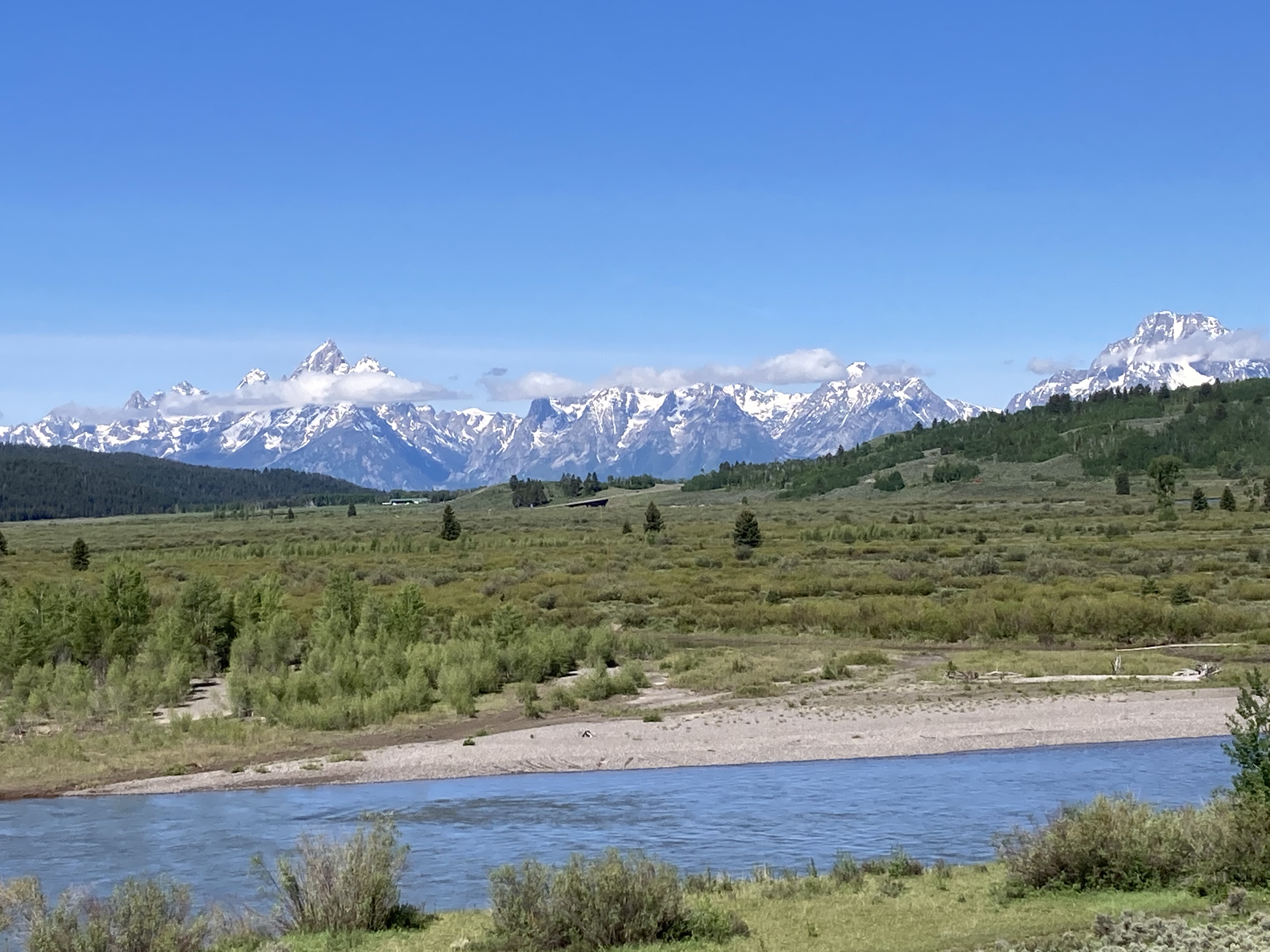 As a matter of fact we only have one true mountain range in Arkansas, the Ouachita Range. The Ozarks Mountains are in reality an eroded uplift that resulted from long term erosion. Driving through the Ozarks and the Ouachita there is a lot of similarity in appearance because of the surface vegetation but if you look at the bones — the rocks that underlie the thin veneer of topsoil — you’ll notice that the rock beds in the Ozarks lie horizontal while in the Ouachitas the rock strata often have a sharp angle of repose and sometimes are even vertical. The black shale road cut just south of the Arkansas River on I-430 in Little Rock and at various locations up the river as far as Fort Smith show this same near vertical orientation.

The Ouachita Range owes its existence to the bumping and grinding when the earth’s land masses merged into a giant supercontinent called Gondwana about 280 million years ago. A giant chunk of what is believed to have once been attached to South America is shoved under the crust of South Arkansas and East Texas. The collision that triggered the compression and uplift of the Ouachitas is also associated with causing the Ozark Dome to lift out of the sea and remain high and dry for the eons to come.

The Rocky Mountains are relatively young mountains, having been formed 50-70 million years ago when the California Plate bumped up directly against the North American plate. The North American plate has been moving west at its current latitude at a rate of about an inch a year, or about as fast as your fingernails grow. In Colorado, it is estimated that the earth’s crust was reduced in distance by about 25 to 50 miles between the western Colorado line and the Front Range of the Rockies.

This compression caused mountains to lift up, just as if you pushed two sides of a table cloth together. Wrinkles would form. Sometimes the uplifted crust was relatively shallow and only involved relatively young rocks. Other times, sedimentary rocks from deeper in the mantle were buckled and tilted on their ends. These old sedimentary sandstone rocks, some 1.5 to 2 billion years old, metamorphed into hard schists that often had cracks and seams between the layers of hard rock. Molten silica and sometimes magma (later to become granite) infilled these voids. If the infill was silica, it was often infused with impurities of silver and gold. The silica seams were the veins miners hoped to find when they dug into the rocky hillsides of the western states.

Much of the red rock splendor I viewed in Utah was erosion of an uplifted plateau, similar to what we have in the Ozarks. For much of the time after the breakup of Gondwana and until about 50 million years ago, Utah sat near the equator and was part of a shallow sea - dry land region that was in and out of the water with great regularity. But, when the Rocky Mountains formed, Utah arose from the shallow sea. Part of the land was uplifted and became a dome while some was pushed downward into a shallow bowl. The high parts eroded away while the low parts filled with fresh water and the sediments from the high parts. Over time the rivers cut into these sediment-filled basins and created the cliffs and spires for which the state is known. Much of the sculpting done in the state has been by the Colorado River, and some features such as the Grand Canyon are thought to be less than 10 million years old.

Yellowstone National park is another kind of uplift, the one caused by the intrusion of magma from the depths towards the surface. Yellowstone is known as a roving “hot spot”, apparently a crack in the mantle that slips beneath the earths crust and creates new uplifted regions. Volcanism can also create mountains when one continental plate slides across another as happened in Arkansas’ own Crater of Diamonds State Park.

But what moves together can also move apart. The 40 mile long Teton Range in Wyoming is the youngest mountain range in North America, clocking in at between 7 and 9 million years. It sits amidst a number of mountains that were formed during the compressional event that created the Rockies, but the Teton formation is caused by a rift in the earth’s crust known as the Teton Fault. The stretching of the crust caused the massive block of crust to split open. The western edge of the rift uplifted, thrusting the range more than a mile high while the adjacent eastern edge sank, forming the low point known as Jackson Hole.

My understanding of mountain building is still incomplete, but by seeing lots of examples I’ve developed a deeper understanding and appreciation for the forces that create, and then wipe away, these magnificent piles of rock.