Fall is my favorite season and I love nothing better than tromping down a forest trail to see what’s up and catch some fresh air. But my morning walks may look a bit strange, for I’m usually holding a three-foot-long twiggy branch in front of me like some ritualistic talisman. This is my spider web staff, and mostly it does a good job of keeping the webs off my face. 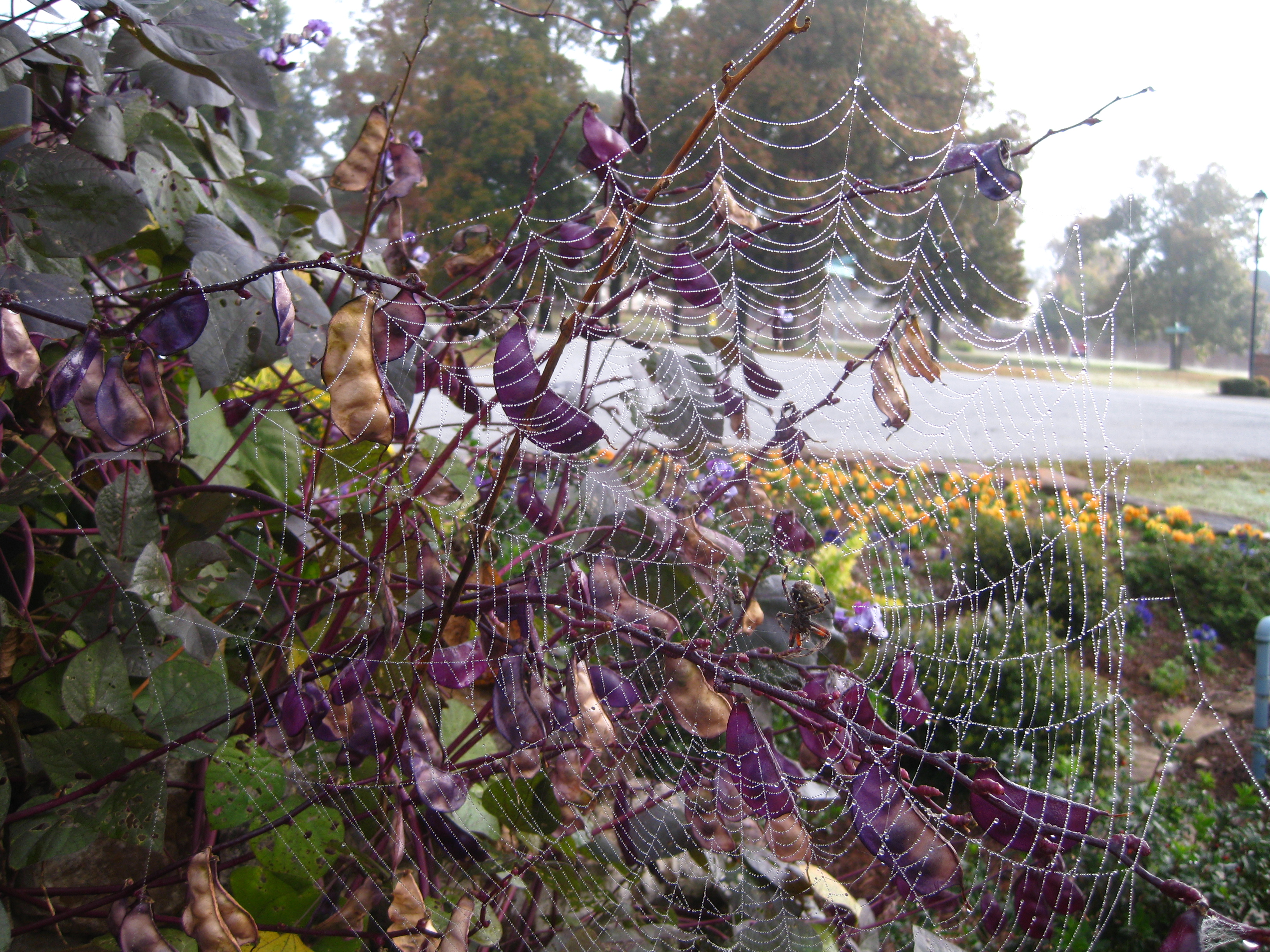 A TANGLED WEB, WOVEN — The spotted orb weaver spider is the most common spider we see in the fall around our homes. (Image courtesy Gerald Klingaman.)

Most often these webs are spun by female spotted orb weaver spiders, the most common garden spider across much of the northern hemisphere. Worldwide the orb spiders are the most common kind of spider, accounting for about a quarter of all known species. The spotted orb weaver spiders are mostly nocturnal, but in the fall they have so much work to do they are at it day and night.

The orb spiders are a large group of spiders that weave round, more or less symmetrical webs suspended in open-air spaces. The spotted orb weaver spider often builds her webs from the roof of a house down to a midpoint on the wall. As I write this, one is sitting patiently waiting on her web outside the office window. The females are the web weavers and they have a plump abdomen that is variously spotted with rusty-red or yellow-orange dots. References refer to it as less than an inch long, but I think size descriptions for spiders refer to the length of the body, not the span of their legs.

All the legs, but especially noticeable on the large hind legs, are alternately banded in black and yellowish markings. Not being a great spider lover, I consider it kind of ugly but I see it described on the internet as cute and lovely. Go figure. It is in no way dangerous but, it might bite if needlessly harassed.

The orb spider spins her web anew every evening and, during the following day eats the old web, rests about an hour and then spins another web. She starts by sending out a single silken strand that she lets drift in the breeze until it attaches to a nearby object. She then goes to the center of that strand and releases another strand, forming a “Y.” From there she continues spinning non-sticky strands until she has completed all the spokes. Then she fills in the spiral strands using sticky silk. It takes her about an hour to spin the web.

The other evening my son Joe pointed out the clouds of gnats that were swarming on the sunny side of a maple tree at about head height. The gnats, triggered by a recent and badly needed rainfall, probably had a synchronous emergence from their pupal stage where the larvae had fed on organic matter in the duff. An orb weaver web in the branches was just covered in ensnared gnats, so her evening meal was ready.

The female lays her eggs in a roundish egg sac rolled inside a leaf. About 1,000 eggs are in each egg sac. The juveniles of this species are often caught by mud daubers wasps and placed in the egg chambers of their earthen nests to feed their developing larvae.

So it goes. The wheel of life spins; some individuals win, some loose but the various parts that make up the whole chug on. I know I should be more concerned about climate change, mass extinction and all the other ills mankind has caused, but I just don’t feel it in my gut. Sure, we should try to mitigate the harm we have caused, but getting an ulcer worrying about what might happen won’t help. Life will adapt, change, and for a short time, stabilize. Where our kind will fit into a changed world is uncertain, but what in life is certain?