About 100 feet from where I write this, an old, long-abandoned trail drops into the pastureland that now stretches along the banks of the Illinois River. This old roadway is probably a remnant of the Trail of Tears, along which the Cherokee and other Native American tribes were forcibly marched in the 1830s as they were moved to Indian Territory. Though it gets harder each year as urbanization overtakes the countryside, it is still possible to read the landscape and see vestiges of what once was in the Natural State. 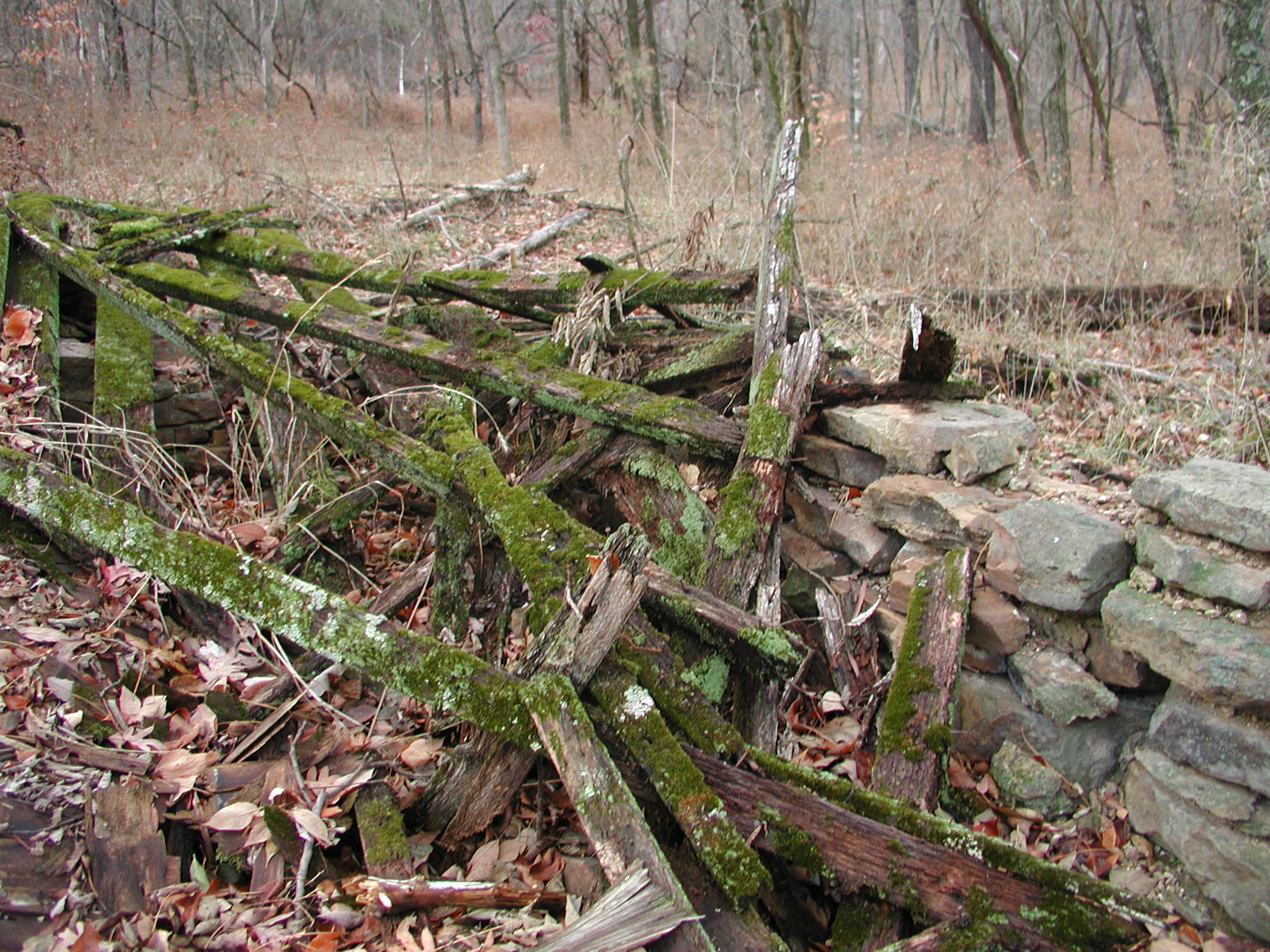 RECORDED HISTORY — Old rock walls and derelict foundations tell a history of those who have attempted to make a go of living in the Ozarks. (Image courtesy Gerald Klingaman.)

Change is a natural part of any ecosystem and my little corner of the world has seen plenty in the past two centuries since settlers began pushing into the region. The Osage Indians controlled this part of the Ozark region as their hunting range when settlers first began arriving in the 1820s. The Osage left their stamp on the land by using fire to encourage grass growth which fed the buffalo, elk and deer that roamed the landscape. These fires killed small trees and shrubs, keeping the ground between the widely spaced trees open.

Fort Smith was established in 1817 along the Arkansas River. The first travelers arrived by boat but in 1824 and again in 1828 congress appropriated money to establish an overland resupply road from St. Louis, Missouri to the new fort. This road, originally known as the Military Road, then the Old Military Road and finally Butterfield Overland Trail, Telegraph Road or Old Wire Road, was an agent of change that shaped the region for generations of Arkansans.

Washington County was established as a county in Arkansas Territory in the fall of 1828 with the countywide survey complete in 1833. With the survey complete, parcels of land began to be snapped up by early settlers and a major transformation began occurring in the appearance of the landscape. Amongst these was that fires stopped. Every time I had the opportunity to inspect an old post oak that had been cut down in and around Fayetteville, I counted the growth rings. Almost invariably these trees dated back to the 1830s and 1840s during the early years of settlement.

The transition from an open pastoral landscape to a cordoned off agricultural landscape was gradual, but it began with the suppression of fire. In 1858 when Waterman Ormsby recorded his 23-day long stagecoach ride on the Butterfield Overland Mail route from St. Louis to San Francisco, he described Fayetteville as “a prairie in the mountains.” In the 1830 Washington County census there were 2,100 people counted; by 1860 the population had grown to almost 15,000. The 2020 census counts 246,000 people.

These early farms included a spectrum of efficiencies: everything from subsistence farming to large, efficient operations that were highly profitable. Wheat, corn and cotton were the main row crops of the region with mules, cattle, hogs and, later, poultry the main farm animals. In the late 19th and early 20th centuries, the region chased new possibilities with apple orchards becoming increasingly important. Other parts of the state grew peaches during the 20th century but that industry, too, is on a decline. With the demise of apples during the “Dirty ‘30s,” tomato, strawberry and grape production became more important, while row crop farming largely vanished. Economies of scale were at work, with the mostly small parcels just not large enough to support a family growing row crops.

Driving the distant reaches of the county you can still see remnants of these old farm fields, often marked by straight rows of trees where a fence once ran. Occasionally you may happen upon old stone foundations of homes or see rock walls where fields were cleared for farming. With the rise of the poultry industry during the middle years of the 20th century and its abundance of litter, pastureland returned to support the cow calf operations we see today. Closer into town these same farm fields now sprout row after row of houses as a new, more profitable crop as we transition from an agriculturally based to a retail economy.

Yet change is continuous. Starting with the back-to-the-land movement of the 1970s, new subsistence farmers began eking out livings in the Ozark backwoods. Perhaps only 10 to 15 percent of these remained on the land, but they are responsible for the genesis of the “local foods” movement that is finding a place in contemporary culture. All the while, the land remains and adapts to the changes each generation places upon it.