Driving northeast along U.S. Highway 54 from Tucumcari, New Mexico to Guymon, Oklahoma, I felt I was traveling along the roof of the world even though most of the terrain was tabletop flat and only about 4,000 feet above sea level. So flat I almost felt as if I could see the curvature of the earth in the distance. This area was part of the great inland sea, the Western Interior Seaway that once occupied this space and shaped the Great Plains from Canada through Texas. 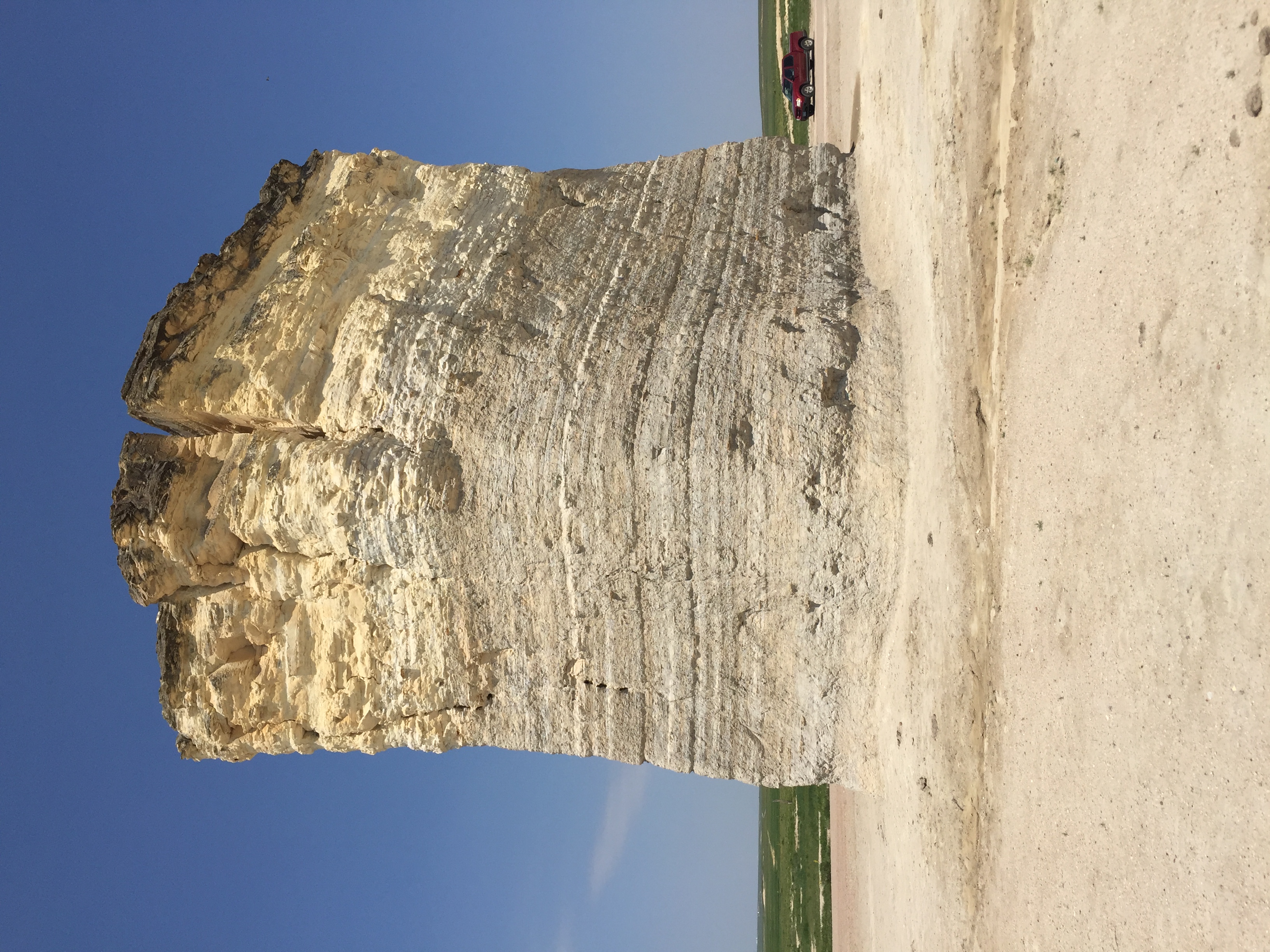 ISLAND IN THE SEA — Monument Rock in western Kansas is a pillar of limestone that accumulated on the sea floor of the Western Interior Seaway. (Image courtesy Gerald Klingaman.)

Digging holes is one of the things boys do on a farm for entertainment. In my case, they were foxholes for the battles my brothers and I engaged in. Digging down in the red dirt on a hilltop of central Oklahoma, I was surprised to find clamshells. How did they get up here, my 9-year-old mind wondered. Of course now I know they were left behind as evidence of the Western Interior Seaway that once flooded over our little farm.

The Seaway started spreading south across Canada from the Arctic circle about 80 million years ago. About 70 million years ago the Rocky Mountains began forming, a geologic event that lasted for more than 20 million years. As the California plate pushed relentlessly against the North American plate, the land to the east of the uplift began to slowly subside. Gradually this subsidence was enough to fill the middle of the continent with a warm, shallow sea that extended from the Arctic Ocean to the Gulf of Mexico and reached depths of as much as 3,000 feet.

At its maximum, the Western Interior Seaway was 650 miles wide and extended into the western counties of Arkansas and, by traversing low ground, as far east as Memphis. As the mountains are being lifted up, erosion began to tear them down. The erosion that washed from the new mountains accumulated in the shallow Seaway. These fans of sediment accumulated in flat expanses at the base of the mountains.

As the Rocky Mountain building episode ended about 50 million years ago, the whole region around the mountain chain was uplifted and the waters of the seaway began to recede. As the water receded, large areas of anoxic (poorly oxygenated water) developed and left behind the red soils of central Oklahoma because of incomplete iron oxidation. The last evidence of sea life deposition in the region occurred around 26 million years ago.

Once out of the water, the newly exposed sea floor began the process of erosion. Because of the rain shadow created by the Rocky Mountains, the annual precipitation in much of that region is about 15 inches per year. For a flat state, Kansas has one of the best state roadmaps. It clearly shows the gradual transition from flat, lightly eroded lakebed in the drier, western part of the state to the more rolling, more heavily eroded parts of eastern Kansas.

Monument Rock in west-central Gove County Kansas, is a small cluster of chalk monuments standing 70 feet tall. Because of some fluke of erosion and a hard cap rock on top, these monuments remain and give a cutaway version of erosion over the past 25 million years in this particular place. Shark’s teeth abound along with a wide array of other sea creatures that would have been found in a shallow seaway. In nearby locations, 18-foot-long predatory fish have been found. Deeper down dinosaur tracks and whole skeletons have been found that were left behind before the Rockies rose up and the Western Inland Seaway formed.

From human perspective the mountains are immortal, but from a planetary point of view, they are but an accumulation of dirt that will be slowly washed away and spread across the landscape. My two-month ramble in the West helped me get a better understanding of the enormity of the mountains and yet better appreciate that everything on this old planet is just passing through, so we better appreciate it while we can.