After driving across so much of the Ozarks’ Springfield Plateau a couple of weeks ago, I thought I’d make a return visit to Joplin to visit their mineral museum in the city park on the west edge of town. The museum tells the story of lead and zinc mining that caused the community in southwestern Missouri to grow into a boomtown in the last years of the 19th century. 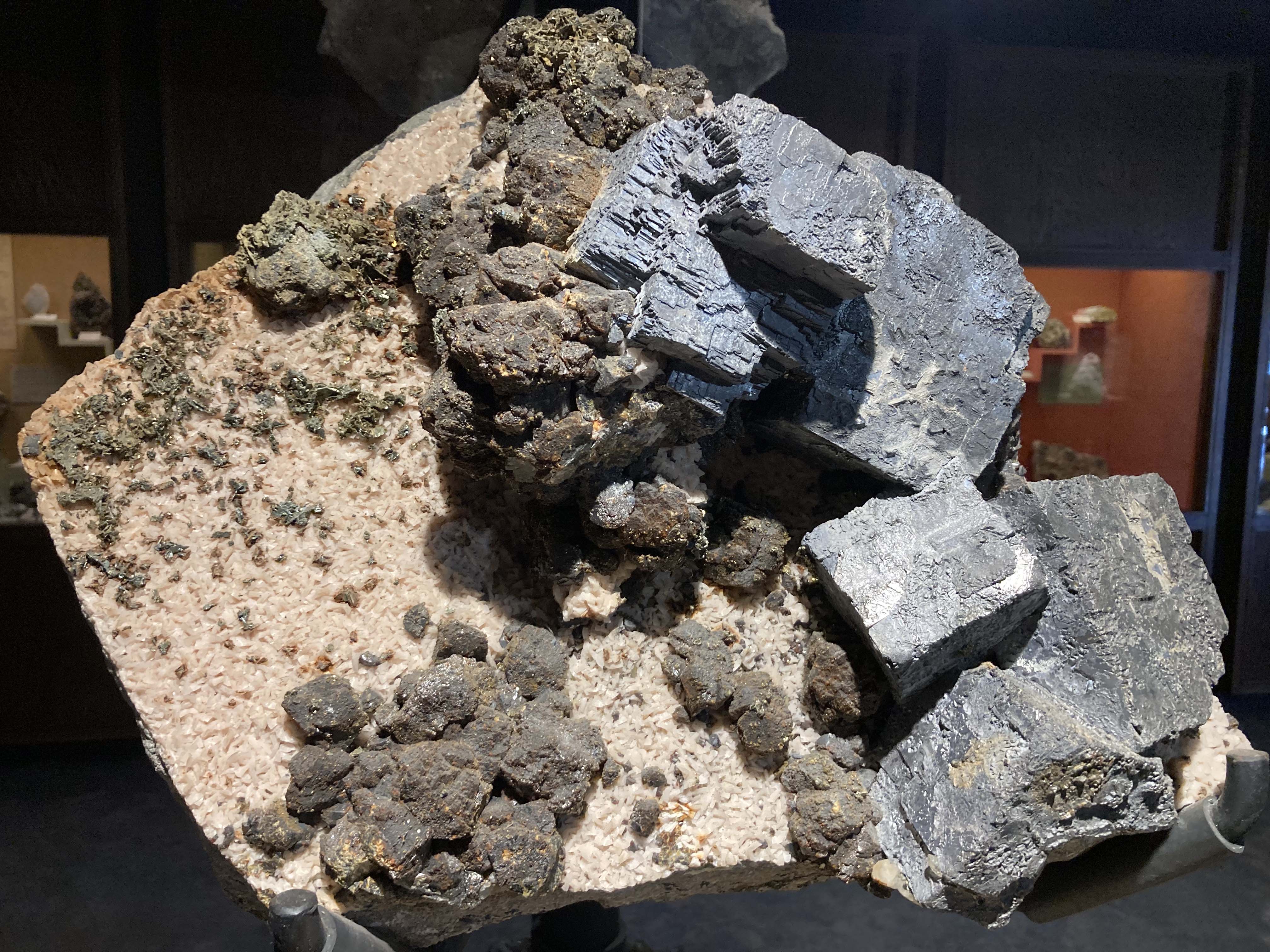 ALL THAT GLITTERS — Galena (the cubes) and sphalerite (the smaller masses) are often found together in the mines of the Springfield plateau of the Ozarks. (Image courtesy Gerald Klingaman.)

Lead had been mined in the eastern Missouri Ozarks since the late 18th century. It was found in the Joplin areas before the Civil War, but it didn’t become important until 1870 when the first major strike occurred. During the next three decades, several thousand mine shafts were sunk into the rolling prairies of the region and thousands of tons of ore removed. At first lead was the valuable metal, but eventually zinc smelting facilities were developed and it became even more important than lead.

Lead and zinc were often found together in crystalline forms embedded in the porous “karst” topography of the Ozarks. The most commonly accepted theory of why the metal deposits accumulated in the Ozarks is because of the continental plate collisions of the Pennsylvanian era about 300 million years ago when the Ozark dome was uplifted. According to the theory, the uplift created deep cracks in the earth’s crust that became passageways for superheated water and steam.

Over time, lead and zinc deposits in the crust dissolved, creating a super-saturated solution of mineral rich water which slowly migrated towards the surface. When this mineral laden water reached these open spaces, left behind where limestone had been eroded away, they pooled, cooled and crystalized. The deposits conformed to the topography of the below-ground karst landscape and appeared as flat runs, vertical runs, pockets – or as found near Webb City, Missouri – a relatively thin, 11-mile-long sheet.

The most common and valuable minerals in these deposits were galena (lead sulfide) and sphalerite (zinc sulfide). They usually appeared together embedded in or amongst silicate minerals. As the original concentrating fluid solution was a witches’ brew of compounds, minerals such as cadmium, molybdenum and others were also present but in lower concentrations. Gold and silver deposits of the western states are often found in veins of quartzite (a salicaceous mineral) and are thought to have formed in the same manner as Joplin’s lead and zinc deposits.

Deposits of ore were found in the Arkansas Ozarks too, with Lead Hill and Zinc (both in Boone County) and Rush along the Buffalo River being examples. But without easy access to railroads, the Arkansas mines never became important on a national scale. As the Joplin mines played out, however, discoveries just across the state line in Kansas picked up. Then, in 1914 the mother of all discoveries was found in Picher, Oklahoma, and the Tri-State Mining District became the most important lead and zinc mining district in the world for the next several decades.

But it came at a cost. On average, galena represented about 1 percent of the ore removed from the mines. In its purest form, sphalerite was never more than 5 percent. Usually that meant that for every ton of metal that was extracted, there was 40-50 tons of mine spoils, called chat. These gravel-sized pieces of chert rock, often contaminated with small amounts of lead, zinc and cadmium, began to pile up in massive mounds. Decades after mining stopped, these piles remain behind and leach toxic metals into the surrounding waterways. Next week we will look at the Tar Creek Superfund Site and its connection to Arkansas history.