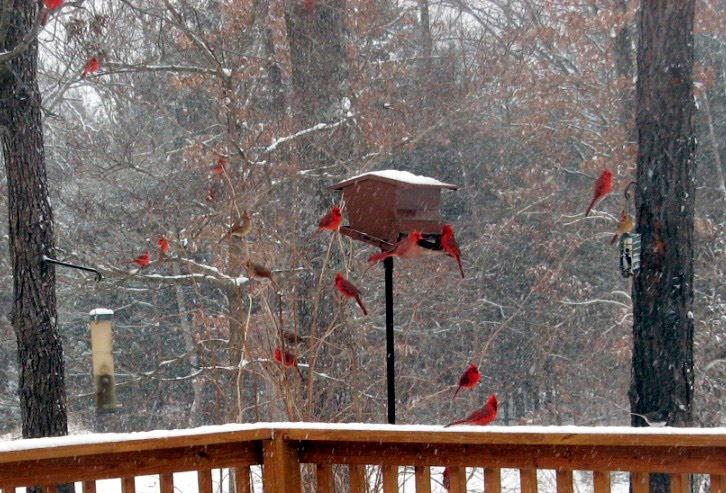 A friend shared this shot of her bird feeder a few years ago.  So many cardinals.

I’m one of the 60 million people who feed birds in this country. Since the pandemic the numbers have grown even more, but I’ve often wondered if feeding the birds is a good thing.

If feeding bears, alligators and deer is bad, why is feeding birds ok?

Bird population counts have declined 25 percent since 1970, primarily because of habitat loss. Maybe the $6 billion we Americans spend on bird seed can help offset the decline. Or maybe we are creating a population of codependent birds that won’t survive unless we mainline black sunflower seed into the feeders.

While there are lots of opinions on the wisdom and environmental ethics of bird feeding, there is generally a shortage of research on the subject. In 2015 Travis Wilcoxen and his colleagues in central Illinois published an article entitled “Effects of bird-feeding activities on the health of wild birds” that provided some interesting insights.

The group selected six forested parks in central Illinois where they established three bird feeding stations and paired them with three sites where the same species were left to their own devices.  In 2011 they netted and tagged a number of birds before the feeding began to establish a baseline of information about the population. Then they set up bird feeders in the selected sites and each year recaptured some of the birds. Overall, they netted 1,680 birds, of which 542 had been previously tagged. The birds were fed over a three-year period with 11 species – mostly the same species we see around our Arkansas feeders – captured in sufficient numbers to be a part of the statistical study.

The team collected biological and physiological markers to evaluate health and wellness. They collected blood samples where they assessed the immunological health of the birds and looked at hormone levels to use as predictors of reproductive health. They visually inspected the birds for four main diseases.

What they discovered was that fed birds were generally more fit than unfed birds, though the incidence of disease was higher for birds crowded together in a bird feeding station.

They found that fed birds had a slightly higher fat ratio than unfed birds, fed birds regrew feathers faster after a molt and that their overall condition was better. The incidence of disease was higher in birds crowding into a feeder, with up to 8 percent of the birds showing some sign of one of the four diseases in the worst-case situation.

Then, in 2013 they stopped feeding the birds. Ten months later, they returned to the site and re-trapped birds. They found no difference in overall well-being, incidence of disease or other physiological parameters between the fed and unfed birds.

Most birding organizations support the bird feeding hobby but recognize there may be a slight increase in the level of communicable diseases. Overall, fed birds are slightly better able to cope with life in our modern world than those left to fend for themselves.

But the best approach is probably a bit too radical for most people: plant natives in your landscape!

Dig up the lawn and plant it to native forbs and shrubs that produce a steady supply of seeds and berries that will feed the birds throughout the growing season and winter. This wild (and often wooly) landscape usually raises the ire of neat-nick neighbors.

As was recently pointed out to me, these gardens full of native plants have another important benefit.  They provide the habitat needed for an assemblage of native insects and spiders. It turns out that even the most dedicated bird feeder bird must feed their fast-growing fledglings insects and spiders as they grow because these beasties provide the protein the young birds must have. The fats and carbohydrates from the bird feeder just won’t do.

So, now I feel better about feeding the birds.  My concern about creating a dependent flock of slothful, lazy creatures is unfounded.