Some of my favorite reads over the years have been books about “The Natural History of…” Subjects have included ferns, conifers, oaks, birds and other aspects of the natural world. What I find intriguing about this kind of storytelling is that disparate strands of information are brought together to help explain why things are as we now see them. Family stories, if you think about it, all have seldom-told backstories that make what we see in front of us now more understandable. A kind of natural history of our own lives. 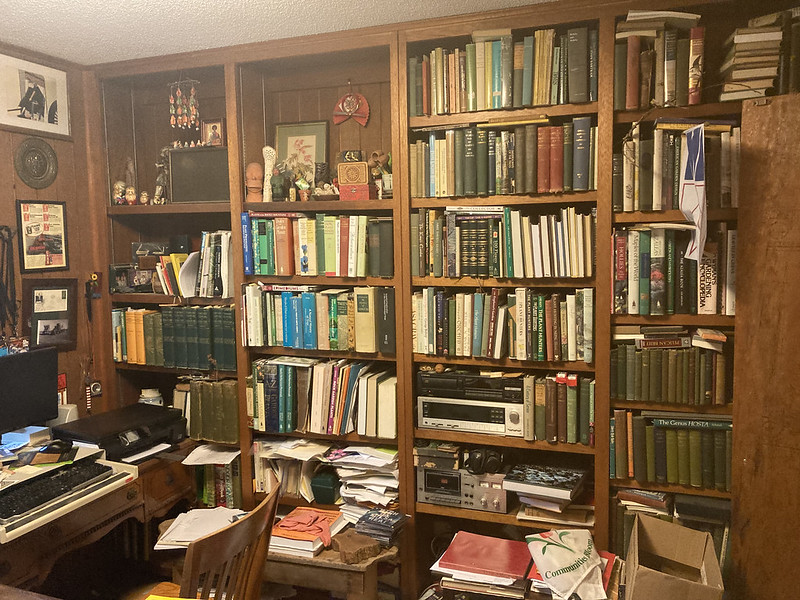 PUT IT IN WRITING — Paleontologists unearth dinosaur bones to study the past while archeologists painstakingly remove layer after layer of soil to help interpret the story of past civilizations. Historians dig through reams of written records to unearth the “truth,” whatever that means. Without a record we become invisible, passing into the long dark night without a trace. (Image courtesy Gerald Klingaman.)

I’m thinking of this because of my current reading assignment. I’ve been tasked to plow through 20 nonfiction books submitted to the 2021 Women Writing the West awards program in the next 60 days. A few are histories but most are autobiographies. Self-told tales of a life and why things ended up as they did.

We all have family stories and it is a real shame more of us don’t take the time to write them down. My own oft-told family story is: “Your great-grandfather John was shot in the face in the Civil War and a doctor told him to move to a drier climate in western Oklahoma so he could breathe better.” This “story” bookends more than 30 years of living and omits the internal and external forces that affected the lives of all the subsequent members of his family.

Sure, our children in the push and pull of everyday life might not be interested now, but maybe they will be someday. Or maybe our grandchildren or their children. Or maybe the effort of writing down the tale is more beneficial to the writer than the reader – helping to clarify why things turned out as they did. At any rate, there is value in recording these personal stories.

Paleontologists unearth dinosaur bones to study the past while archeologists painstakingly remove layer after layer of soil to help interpret the story of past civilizations. Historians dig through reams of written records to unearth the “truth,” whatever that means. Without a record we become invisible, passing into the long dark night without a trace.

Some of the autobiographies I’m reading are like the old Dragnet show on TV: “Give me the facts, just the facts ma’am.” Perhaps good for future family members hoping to write a more interesting and compelling story sometime in the future, but painfully difficult for this reviewer to read. Others are more like the flight of a butterfly, flitting from subject to subject without an explanation for the sudden change of scenery. Some are more focused, just telling a narrow slice of pivotal events that affected the rest of the writer’s life.

Another thing I find is that many of these writers have a long-held desire to write. To scratch this itch, many have attended writer workshops or even done graduate work in writing. Training in any craft is a good thing, but I’ve read enough to pick up on what I call “writer workshop” writing. Instead of telling a straightforward story, there are usually at least two storylines involved in workshop writing. Better writers are able to seamlessly present these different but related threads together, carrying the reader along without creating confusion.

The best and most important autobiographies tell stories that will help explain why things are the way they are today. As an example, one author (Louise Wagenknecht, Shadows on the Klamath, Oregon State University Press) follows her early career with the U.S. Forestry Service in the 1970s and ‘80s as she signed on with a predominantly male organization and began planting trees and fighting forest fires. Not only do we follow the changes in her life but the changes wrought on this old-line government agency as the world changed around them.

All the reasons not to write – nobody would be interested, nobody would ever publish this, I’m not good enough, and a gillion other lame excuses – just result in the loss of more and more stories that should be recorded. If it is written down, force copies on family members but also consider Brautigan Library, a collection of thousands of unpublished manuscripts. Richard Brautigan, one of the beat writers of the 1960s and one of my favorites, published The Abortion – an Historical Romance in 1971. In it the main character runs a library completely dedicated to unpublished manuscripts. After Brautigan’s death, such a library was founded, a case of fiction taking on a life of its own.