This fall I’ve helped my son build what I’ve called the “bunny bungalow,” an open-air pavilion for rabbit cages. He chose to make it out of native cedar beams (eastern red cedar, aka Juniperus virginiana) sourced from local sawmills. For a couple of weeks he waited while one of the mills sought out trees large enough to cut 16-foot-long one by sixes. The woodcutter asked, “You know how hard it is to find cedar logs large enough to cut sixteen-foot boards from?” But that was not always the case. 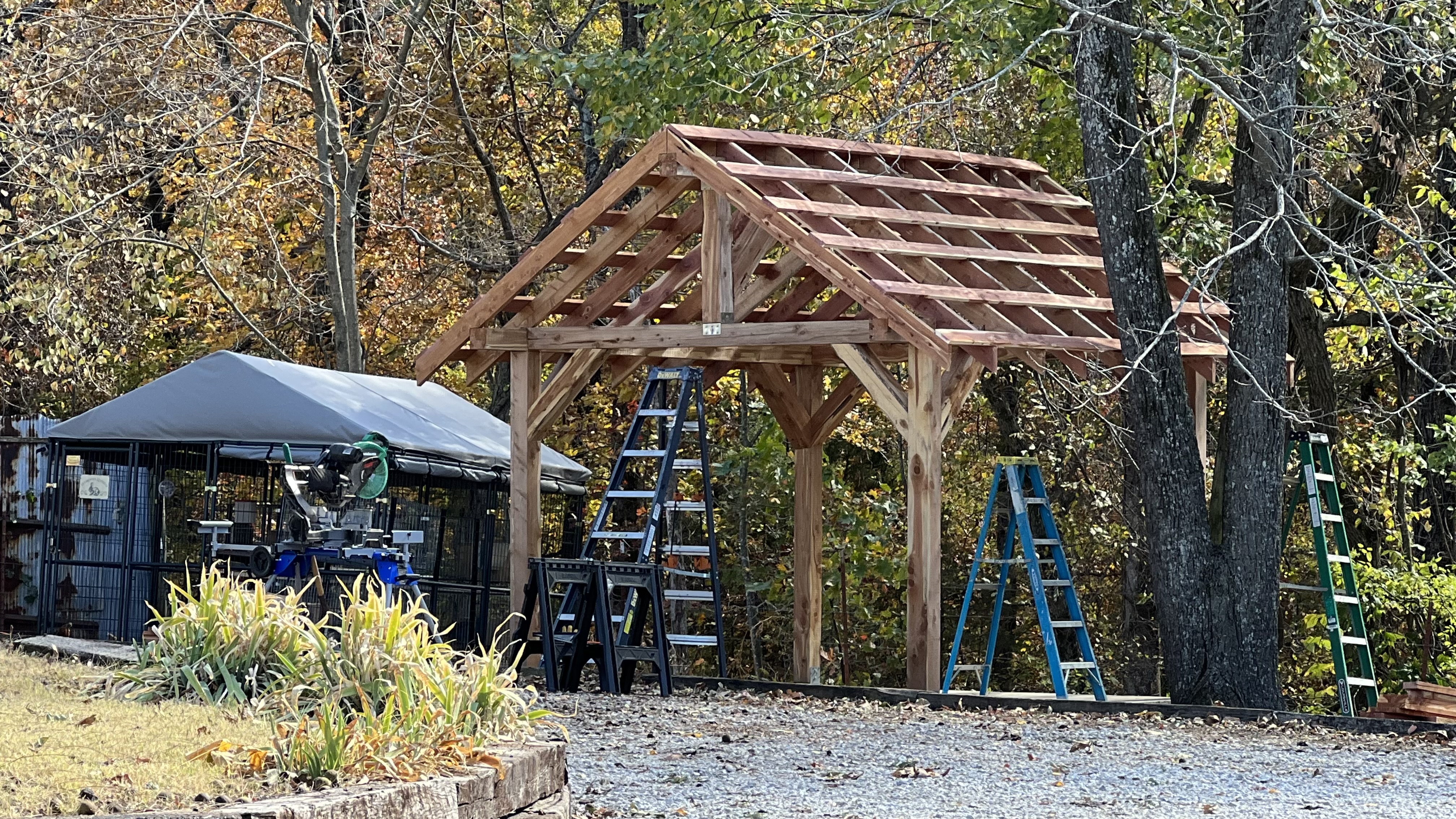 SHELTERED — Cedar logs are again being cut from the Ozark woodlands but these second growth trees are tiny compared to the old growth trees of a century ago. (Image courtesy Gerald Klingaman.)

Cedar trees are an example of a native tree that is doing too well to suit even the most diehard native plant lover. Unlike most conifers that are suffering as climate change warms the planet, cedars love it and are expanding their range. Once limited to rocky and barren places in the eastern states, they are now expanding into the Great Plains and even the western states.

Eastern red cedar is a pioneer species, moving into disturbed or overgrazed pastureland. Periodic fires once controlled  the spread of this needle-leafed evergreen, because burning the top kills the tree completely. They will not sprout from the roots like many of the hardwood trees of the Ozarks. Rocky outcrops were the usual places cedars could survive a fire in pre-settlement days where they often obtained considerable age and size. In the absence of fire, constant vigilance or frequent mowing is needed to keep them in check.

Cedar wood is a lightweight, sappy, decay-resistant softwood lumber. Because it grew in isolated, hard-to-reach places, it was not often used for cabin building but became a mainstay for furniture – especially cedar chests because it kept wool moths at bay, water buckets, and fence posts. Only the red heartwood is decay resistant, but cedar logs not encircled in the many knots seen in smaller trees we see today, split easily.

Commercially it was the go-to wood for lead pencils. Pencil making used to be a cottage industry, but after the Civil War it industrialized and large, straight-grained cedar trees were harvested relentlessly throughout the southern states. By the late 1890s, most of the southeastern states had cut over their supply of old growth cedar trees and manufacturers began looking at the California incense cedar (the tree still commonly used today) for a replacement. But one company, the Eagle Pencil Company of New York City, the largest pencil company in the world at the time, contracted to harvest the old growth cedars found in the steep valleys of the southern Ozarks. The greatest concentration of these trees was in the Buffalo River valley.

This era of logging was short lived but colorful. It probably lasted little more than a decade from the late 1890s until about 1910. Tom Dillard, Arkansas historian extraordinaire, detailed the stories of a couple of young men who helped harvest and float the logs to sawmills along the White River during this period.

Because cedars grew in steep, hard-to-reach areas and because roads were mostly little more than wagon trails through the woods, floating the logs out was the only way to get these big, old-growth cedars out of the valleys. The trees usually grew in groves, so harvesting began on the side closest to the river. Mules were used to skid the logs to a location where they could be rolled down the hillside and accumulated alongside the river. Average trees had a 22-inch diameter, while exceptional trees grew as large as 42 inches in diameter with a height of 85 feet. Much of the lower portion of these trees was smooth, straight-grained timber free of knots and ideal for pencil making.

On one tract of land, 70 men labored for more than half a year to remove the trees and get them into position for a float. Wages were 50 cents a day with a dozen pencils selling for 10 cents. Floats had to happen after a rain in the fall or spring. They tried to time it so that the large rafts of logs were pushed into the river as the river was receding after a flood, thus helping keep the logs in the center of the channel. Accounts of rafts as large as 175,000 logs were reported during the peak years of the cedar harvest. The logs were floated to sawmills along the White River where they were retrieved, sawn into slats and then shipped by rail to plants where the pencils were made.

After more than a century, our cedars have grown large enough to again harvest for dimension lumber. But it will probably take another century of growth to achieve the knot-free smooth grain wood of the old growth cedars that used to populate the Ozark region.