With the leaves now dropping, the framework of the trees that surround us in the landscape is evident. Too often we put off early pruning of shade trees because they are so small, thus avoiding the early discipline they need. Not a good plan. It is the branching structure that matters, and this is established in the early life of the tree. 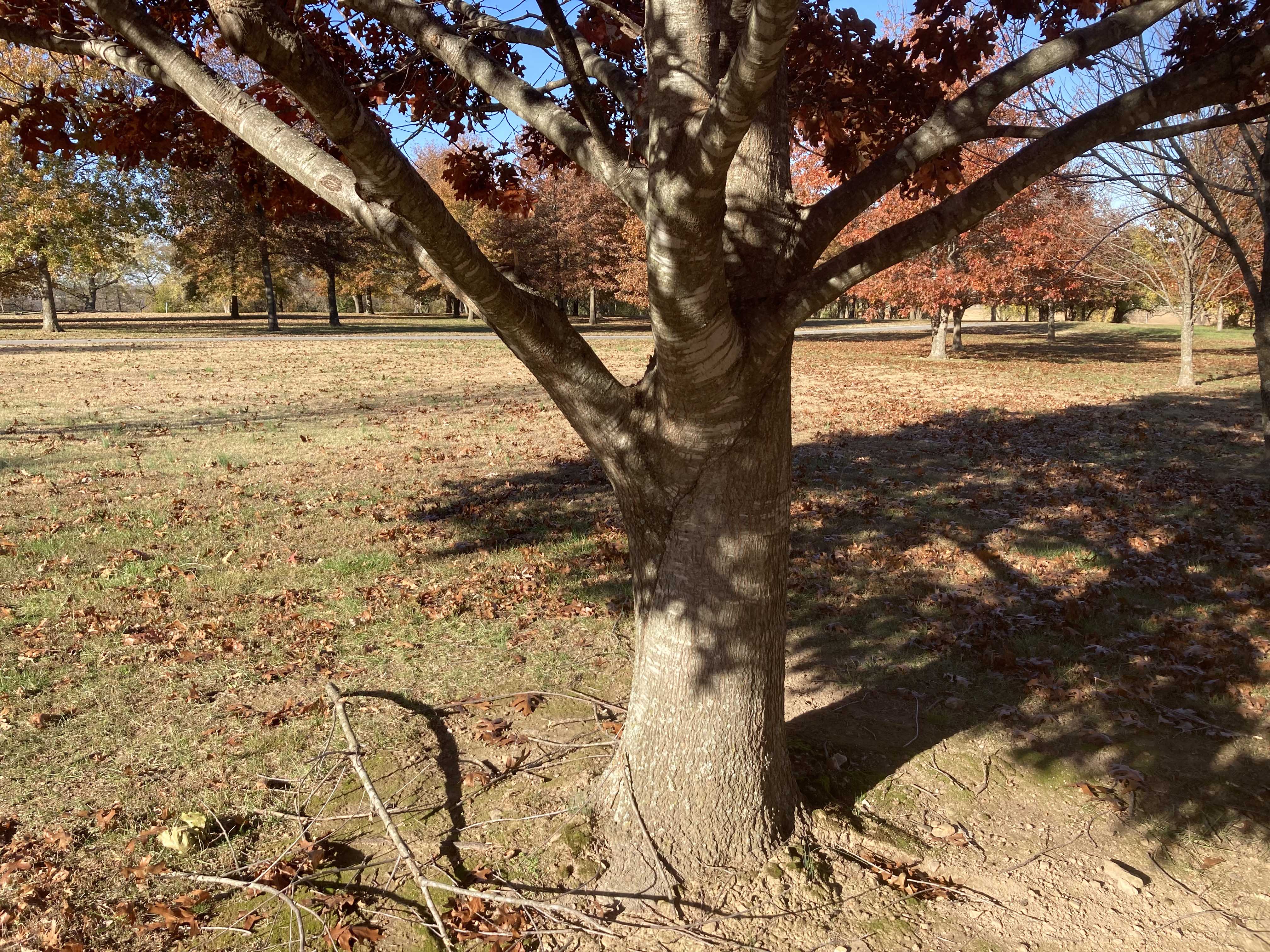 LIMBING UP — These lower limbs are about five feet off the ground. Great for having an easy to climb tree but not a good plan for a stately park tree. (Image courtesy Gerald Klingaman.)

For the most part, pruning should be avoided as much as possible. The most important part of pruning is making sure that the right tree is in the correct place. Having room for a tree to grow to its normal size eliminates much need for pruning and helps insure a long, healthy life for the tree. Planting too close to structures or under overhead lines will ensure future pruning will be needed. Bobbing back limbs is probably the worst thing that can happen to a tree.

A tree that is trained from planting can usually be pruned from the ground by the owner, avoiding the need for bucket trucks and wood chippers. Sure, storm damage can occur or some other calamity befall a fine tree, but mostly if the tree is trained from the beginning and unwanted limbs removed while small, many future problems can be avoided.

Most shade trees have a main trunk with a single axis and then branches coming off at regular intervals up the trunk. When a tree is transplanted into the landscape, oftentimes the terminal of the main trunk dies, resulting in a flush of axillary branches that all compete for top dog position as the tree becomes established. This is the first place some early intervention can help get the tree off to a good start. By selecting the dominant side branch and – if necessary – splinting or staking it so it grows in an upright position, a new growing point for the tree can be reestablished. Pruning back or removing the competing side branches restores the orderly balance of the tree with the terminal shoot in charge and the axillary branches subordinate to it.

Admittedly, some tree species have more of this apical dominance than others. Sugar maples tend to have fairly strong apical dominance; silver maples have weak apical control. Red maples are somewhere between the two extremes. American elm grows to a certain height and then the terminal stops growing and a whorl of branches emerges, giving the umbrella shaped form of the tree. Other elms, such as winged elm, more closely resembles the form of a sugar maple. Being mindful of the natural branching pattern of a species should help inform early pruning practices. Training a tree to grow in an unnatural form for the species can be done, but it takes a lot of pruning to achieve that goal.

Once the tree is growing and established, it needs to be inspected annually to determine if an unwanted narrow-forked terminal should be removed or which low lateral branches should come off. I call this “limbing up.”

Occasionally it may make sense to leave these lower limbs in place. For example, if a row of pin oaks was planted to screen an unsightly view, allowing the limbs to sweep the ground may make sense. But mostly we want shade trees limbed up so that the lowest branches are high enough they won’t knock our hat off when mowing beneath them.

These side limbs should be removed when they are about the size of your thumb. Removing a limb that small will ensure the wound heals in a single growing season, almost eliminating the possibility of heart rot inside the tree trunk. Pruning off a limb the size of your upper arm on the lower reaches of a trunk will almost always lead to future trunk decay because healing large wounds takes years, giving plenty of time for decay organisms to enter.

By training shade trees so that there is one dominant growing point and periodically limbing up lower branches so that the first permanent scaffold branch is at least eight feet off the ground, it is easy to add decades of maintenance free life to shade trees.