Plant of the Week: New Directions

Change is the stuff of life. It offers renewal, redirection, reflection and a chance to refocus. I’m at one of those junctures where I decided it was time to embrace change and head off in a new direction. I have been doing the Plant of the Week columns for the University of Arkansas System Division of Agriculture Cooperative Extension Service since 1997 and have enjoyed the opportunity to learn more about the plant world and the people involved with it. But it is time for a change. 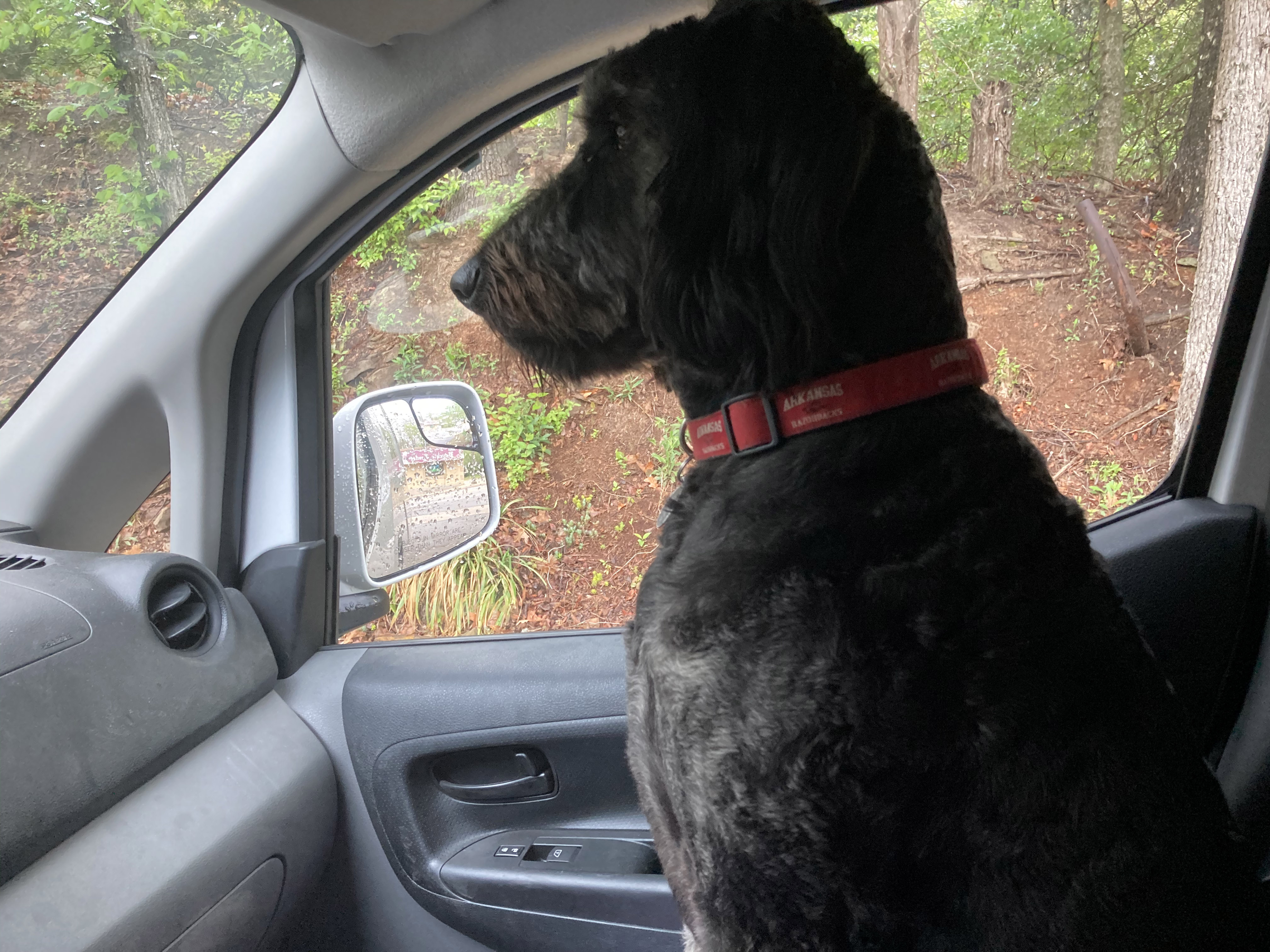 WESTWARD BOUND — My dog Whinny and I plan on doing some exploration. (Image courtesy Gerald Klingaman.)

My new direction for these musings is to broaden my scope and focus on all aspects of nature and the natural world, not just plants. Like most gardeners, my embrace of the natural world is not limited to just plants but includes everything from bugs to boulders. Those who have followed me for a while know I’ve often strayed from the plant based format, but now I give myself full reign to delve more widely into things that arouse my curiosity.

By way of introduction, let me mention Earl Scruggs informed us that we can’t “get above our raisin’.” I was raised the forth son (of eight children) of an Oklahoma wheat farmer and came of age in the turbulent 1960s. Though I appreciated the sensitivities of the hippies of my day, I was still the son of an Oklahoma wheat farmer. I tell people I served in the same unit as Bill Clinton, going to graduate school (University of Maryland) instead of Viet Nam. In 1974 the Horticulture department at the UofA had a job splitting my time between teaching and Extension, so I settled in. After retirement I volunteered and then worked at the Botanical Garden of the Ozarks here in Fayetteville for the next decade.

Part of the change I mentioned involves travel. I’ve always enjoyed travel and have been lucky enough to do a fair amount of it, but my plans now include a bit more free-wheeling embrace of the journey. With the passing of my wife, Jolene, last winter and the purchase of a small utility van this spring, my dog Whinny and I are off to explore. While the blue highways Least Heat-Moon talks about in his first book will take me away from Arkansas, I will attempt to relate what I see and experience back to the place I have called home for the past almost 50 years.

Traveling with Whinny, my 3-year-old labradoodle whose real name is Winston but I renamed because he’s big as a horse, presents a special set of challenges. First, he’s a bed hog and a very sound sleeper, so I find myself yielding to him instead of the other way around. Second, I remember Philip Martin’s (the movie/style editor for the Arkansas Democrat-Gazette) admonition a few years back that when you start writing about your dog, you’ve run out of things to say. I’ll watch that but, he’s a good boy, a very good boy.

Travelogues have always intrigued me, especially the writings of the plant explorers such as Wilson, Fairchild, Fortune, Ward and Darwin’s Voyage of the Beagle are favorites because they meld natural history in with the exotic places they visited. Steinbeck’s Travels with Charlie and Least Heat-Moon’s Blue Highways are more about discovering America than unearthing nature, but they embody the spirit of spontaneous discovery I hope to find as I travel about.

I have no idea what I will learn on this voyage of discovery. Were it known, I guess the trip would be unnecessary. While nature will be the central focus of this new series of columns, I will try to include some social and cultural context because the web of life is one interconnected whole. We’re in this together – the minor and the mighty – so nature cannot be considered in isolation. I look forward to this road trip and the opportunity to share the things I see in coming columns. Stay tuned. This summer I’m exploring the mountains from Idaho to Arizona.

Explore the Musings on Nature Blog

Gerald Klingaman, a retired extension horticulturist and operations director for the Botanical Garden of the Ozarks in Fayetteville, Arkansas, has created a library of hundreds of plant histories that run in newspapers across the state and have become a favorite of gardeners in Arkansas and beyond. We hope you'll enjoy our extensive archive of his works and return each week to see what's new.