Swish, swish, swish go the cars as they pass me on the National Park roadways. More than a million and a half people visit the Canyonlands of southeastern Utah each year to marvel at rocks, mostly sandstone rocks. Most of us that visit this dry and thirsty land have rocks where we come from, but here the rock displays are over the top and almost beyond belief. 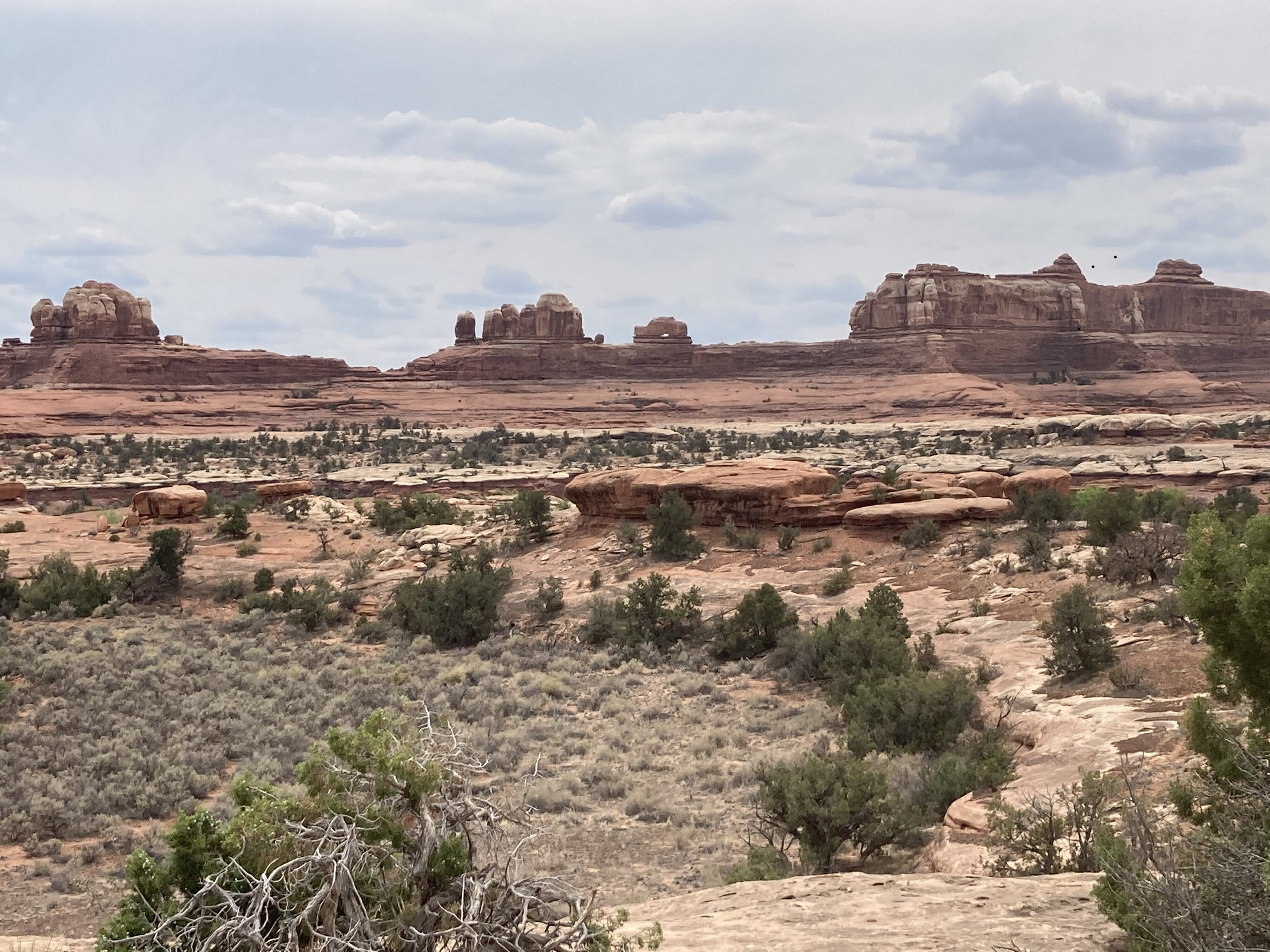 FROM THE COLORADO VALLEY FLOOR — Looking up from the canyon floor, all of this cutting has been done by the Colorado River as it meanders through the sandstone rocks. (Image courtesy Gerald Klingaman.)

These are sedimentary rocks, most of them sandstones or their close kin. Sand, the basic ingredient of sandstone, is both a mineral and a size class. Typically sand is made of pieces of silica from the size of a pinhead to tiny pieces that are gritty when you rub your fingernail across them. In lakes and oceans sand, silt and clay settles out at different rates and in different places in the water column. Larger sand grains fall out first, then the smaller silt sized particles settle next to create siltstone. The last to precipitate are tiny clay particles which are the final weathering product of metamorphic rocks. These accumulate in deeper water and turn into shale deposits when they become rock.

Turning a loose assemblage of particles into rock is a process known as lithification. It usually involves the percolation of some cementing agent into the matrix such as calcite (calcium carbonate) or something to firm up the matrix. And then a long steady application of pressure and sometimes heat.

Sandstones, siltstones, mudstones and shales can be tinted various colors by infusion of minerals such as hematite that turn the rocks red or limonite that turns them yellow or tan. Blends of the two forms of iron oxide can create an array of colors in the rocks. Near-white sandstone is pure silica sand that accumulates on a beach or originated as a sand dune that became frozen in place when buried by more sediments.

The deposition of these sedimentary rocks has been going on for billions of years but most of the exposed rocks here are in the 200 to 250 million year old range. This part of the American west, not unlike Arkansas, spent a lot of time as a part of a shallow sea that was surrounded by uplifted mountains. These ancient mountain systems wore down, filling the seas with their sediments, building thicker and thicker layers of sedimentary rocks. Tectonic forces were frequently, in a geologic sense, lifting the land out of the sea only to submerge it again.

This portion of Canyonland was lifted out of the water for the last time about 60 million years ago. It is included as a part of a big, thick chunk of land called the Colorado Plateau - land in western Colorado, southeastern Utah, northeastern Arizona and northwestern New Mexico - that mostly all drains into the Colorado River. When the Rocky Mountains began forming about 70 million years ago, the Colorado Plateau lands were mostly unaffected because of the thick depth of the basement rocks.

From where I write this in The Island in the Sky, I’m on a plateau surrounded by red, thousand foot sandstone and siltstone cliffs on all sides that drop away to broad valleys formed in softer shale and mudstone deposits. In these softer rocks the Green River (to the west) and the Colorado (to the east) has cut a thousand foot deep trench in the valley floor to reach their current levels. They join up about 20 miles further south and begin the process of cutting the mile deep trench we call the Grand Canyon. Surprisingly, all of this erosion is thought to have occurred only in the past six million years.

The amazing thing to consider is that most of us live atop thousands and thousands of feet of sedimentary rocks. In many places these deposits are five miles thick, but they haven’t been eroded away — yet. Something to ponder as another magnificent display of rock art flashes by.