I’ve been on the roadtrip of my life. Seeing the sights. Me, my dog and a few million fellow travelers have left our cozy nest to see what’s out there. Kind of the ultimate Sunday afternoon drive. 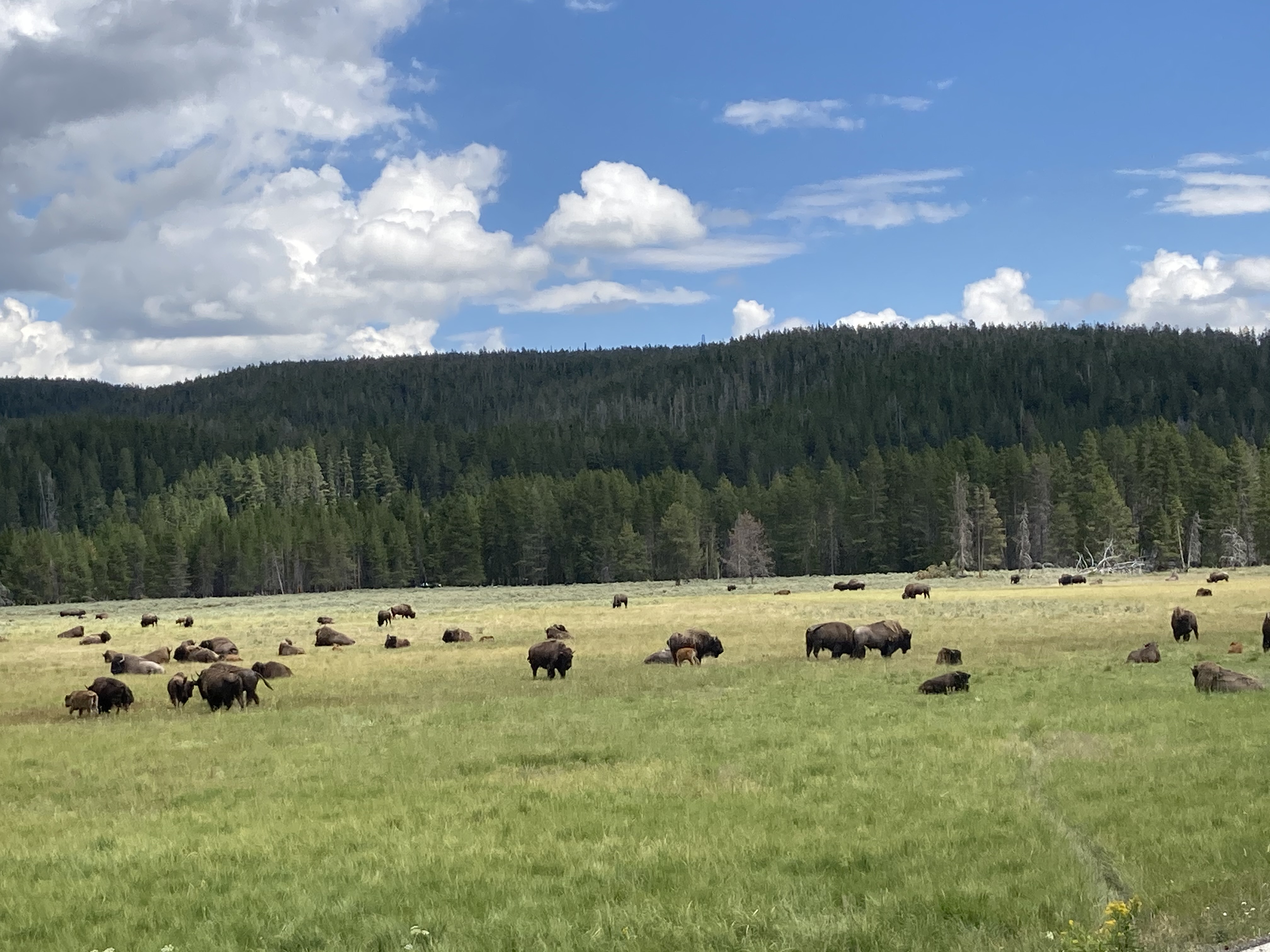 Yesterday I spent more than an hour sitting in a buffalo sighting traffic jam in Yellowstone. It’s not a bad place to be stuck in a traffic jam, but it is a sign of just how many other people have decided to see the West this summer. In 2019 Yellowstone experienced its highest visitation ever; this year so far has exceeded that record.

Though I am just guessing, the popularity of the Sunday afternoon drive is probably way down. It has been replaced by the myriad of activities we now can choose from for diversion. To me this is a shame, because there are many sights, both big and small, that surround us at home but we are too busy to seek them out.

Most of my fellow travelers had probably never seen buffalo grazing free on the open range before, so it is not surprising they stopped to stare. The several hundred animals and their tawny calves were beautiful in a beautiful setting, but buffalo are no longer rare across the heartland of America. I make it a point to drive by the Tall Grass Prairie Preserve in Pawhuska, Oklahoma to keep tabs on their heard of 2,500 animals on the 45,000-acre prairie. Seeking out these little-known and seldom visited places is a big part of the adventure of seeing our country, not just hitting the most popular travel destinations.

It is not surprising that so many Americans and people from throughout the world come west to see the sights. Ever since Horace Greeley, we’ve been encouraged to head west. See the sights and partake of the experience portrayed in popular culture. A lot about the West has been romanticized; you can find a Walgreens on the corner of every major town you enter. But the fabric of westerners is somehow different, even if they are recent immigrants from White Hall, Arkansas who find themselves proprietors of a Wyoming dude ranch.

As I travel about, my goal is to avoid the interstate highways, sticking to the back roads as much as possible and avoiding big crowds. I was going to skip Yellowstone altogether but, after studying the map, I thought passing through was the best route to Cody, Wyoming, my next destination. The pace on back roads is somewhat slower and I definitely do not miss staring at the back of a semi. I’ve found Google Maps less than helpful because their algorithm assumes I want to travel far and fast. Not so. Slow and easy is my goal, trying to absorb as much of the scenery and character of the place as possible.

As one who has taken up the study of rocks in their old age, Utah just about did me in. Unlike most places with enough rainfall to cloak their bones in a mantle of vegetation, Utah lays it out for all to see and ponder. Beautiful in its rugged beauty, I could understand part of what I was seeing but so much was a confusing jumble of uplifts, erosion, faults and eras. I finally just submitted to the grandeur of the place and let the red cliffs carry me along in a state of stupefied wonder.

We farm boys can’t help but find the agriculture of the West fascinating. So much of this vast landscape could be productive were water not in such short supply. Idaho, with its potato fields in the recharge zone of the Snake River aquifer or the dry land wheat fields in the rolling hills of the Panhandle, was especially remarkable. These wheat fields are in the Palouse region, a section of rolling, loess-covered hills that extend into three states and could serve as a cover photo for any annual farm calendar.

So I travel about seeing the sights, meeting interesting people and learning bits and pieces about this place called the American West. Mine is an incomplete education at best, for I am but a traveler in a foreign land. Travel is in my view one of the most important forms of education. But before we strike out for an advanced degree in travel, we need to spend some Sunday afternoons exploring the backroads near home.