I was pleasantly surprised by the grocery store panic rush. Some of the first things that was sold out were dry beans! Wonder why? I also noticed that fresh and frozen meat & poultry were almost gone, but there were still plenty of canned beans. Getting enough protein was obviously a concern for a lot of people! Most Americans get plenty of protein, but how much is enough?

That depends on your age, sex, and activity level but most people need between 2 and 6 ½ ounce-equivalents each day.  So how much is that?

A woman between 31-50 that gets less than 30 minutes per day of moderate physical activity needs 5 ounce equivalents of protein.  That could include an egg at breakfast, ¼ cup cooked beans at lunch, and a 3-ounce serving of chicken at dinner.  If that women got more activity, she would need more.  Notice that what a person needs is different from a person may want!  That distinction is important during this time of pandemic and being at home.  If you’re not getting as much physical activity, and you’re not running low on supplies, you can probably consume less protein than normal.

The protein group supplies many nutrients such as protein, B vitamins, vitamin E, iron, zinc, and magnesium.  But some of our protein choices can also supply some not-so-great things like saturated fat (which can raise your bad/LDL cholesterol) and cholesterol.  Some protein choices that are high in saturated fat include fatty cuts of beef, pork, & lamb; 75-85% lean ground beef; regular sausages, hot dogs & bacon; some luncheon meats such as regular bologna and salami; and some poultry such as duck.  Limit how much of those foods you eat on a regular basis.  Focus more on leaner cuts.

Keep it SAFE to eat: 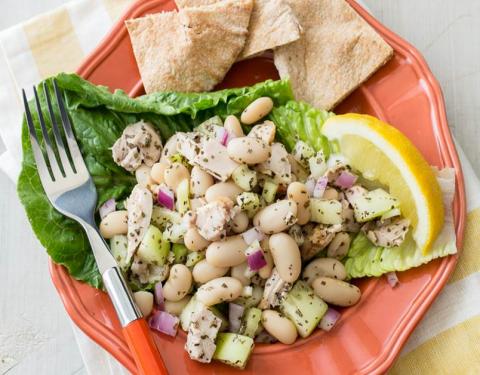 Need a quick & easy recipe made with mostly pantry staples?  Here’s a yummy Mediterranean Chicken and White Bean Salad.  Feel free to sub out the chicken with tuna and the cucumber with tomatoes (or whatever is handy).  This is a really good recipe that will help you get in your protein AND vegetables!