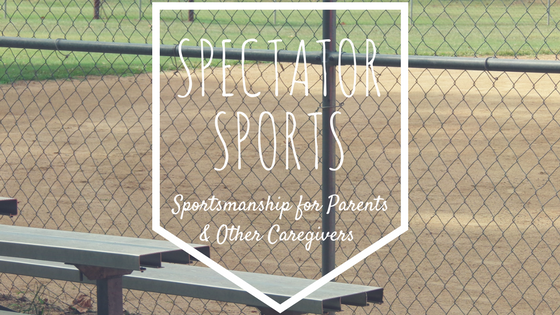 Spectator Sports: Sportsmanship for Parents and Other Caregivers

We've all seen them. The parent who is more into their child's ballgame than the child is. They pace up and down the sideline or sit biting their nails. They shout at the umpire or curse the referee. They make loud, disappointed noises when the pitcher (who is not their child) makes a mistake or the lineman misses a block. They talk about the kids on the other team and make comments that their child/grandchild/niece or nephew is better than the kid playing first base/point guard/goalie/quarterback, and if that coach knew anything they would put their child/grandchild/niece or nephew in there instead. We've all seen them. We may even BE them from time to time. But even if we are that spectator, we can probably agree that we are annoyed by people who live and die by their child's performance in sports. Support is one thing, but stress inducing pressure and negative behavior is something else.

Get In the Game

Watching a child or grandchild's sporting event can be very stressful. Everyone wants their child to do well, and some people do a better job at managing their emotional responses to stress than others. When the stakes feel high, the stress goes even higher. Parents and other caregivers may feel like they are living through the child they came to watch. They feel every moment of stress, joy, disappointment, and anger that the child feels, and maybe even some they don't. Showing your support of your child, grandchild, or other important child in your life is a great thing! They love to play, and they love to have the people they love watch them play, but when the people they love behave badly, it can add more stress to the situation through embarrassment, anxiety, disappointment, and added pressure, and it also sets a poor example for the kids you came to cheer for.

Here are a few tips for easing the stress and setting a positive example for your athlete. 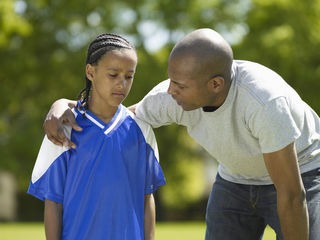 Remember why you are there. You came to watch a child you love play a sport they love. Although you want them to do well, yelling at them, belittling other children or parents, or shouting at the officials will not make them play better, and can, in fact, make them play worse. It adds stress to their experience that isn't helpful.

Remember who is watching. At whatever event you attend, there are other people around you who are there to enjoy the game too. Many of those people (including the one you came to watch) are young and impressionable. Saying negative things (even under your breath), shouting, pacing, cursing, questioning the officials, and other disruptive behaviors not only take away from the experience of those watching the game, they set a poor example for the young people in the crowd and those on the field.

Remember that words can hurt. No matter how frustrated you are with a coaching decision, play execution, or other parent's comment, unkind or inappropriate language can't be taken back. Picking on your own or another child or shouting at a coach, official, or parent is not worth the hurt it may cause, and you may even get kicked out of the game. If you feel so frustrated that you can't help yourself, it's best to remove yourself from the situation, even for a few minutes, to breathe through it and return when you are back under control. If you really need to address something with a coach, official, or other parent, talk to them one-on-one at an appropriate time. Never approach another person's child to criticize their play or otherwise say anything negative.

Remember to be a gracious winner, not a sore loser. If "you" win, don't rub it in to opposing parents or coaches. If "you" lose, don't make excuses or blame others. Your kids learn by watching you how respond to things. Show respect for your child, your child's team, and the opposing team by congratulating the winners and genuinely comforting the losing team.

Remember that it's just a game. Even if you are at a college sporting event, you are watching amateur athletes play a game. Even when the stakes feel high, the example you set for your athlete and her/his teammates is far more important than the outcome of the game. It may feel like life or death in that moment, but a game is still a game. Disappointment can be recovered from, but teaching your child aggressive or other disruptive sideline behaviors can lead to similar behaviors in adulthood.