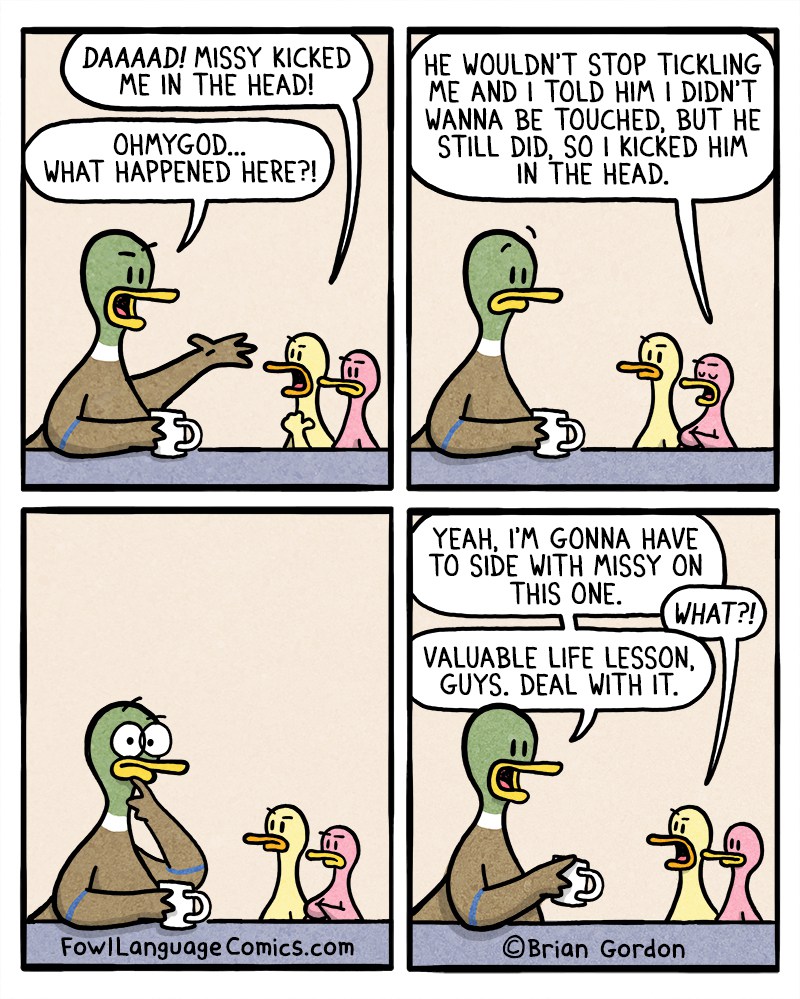 A few weeks ago, Fowl Language Comics posted this comic strip depicting a parent duck talking to two children. One child complains "Missy kicked me in the head!" The parent's first reaction is to get mad at Missy. Then, Missy explains why she kicked her brother in the head, "He wouldn't stop tickling me and I told him I didn't wanna be touched, but he still did, so I kicked him in the head." The parent thinks for a second, and then says, "Yeah, I'm gonna have to side with Missy on this one," calling it a "valuable life lesson."

Consent and regard for others' wishes can be an uncomfortable subject to discuss with young children. They don't generally understand why the parent may want to talk about it, but waiting until a child is "old enough" to understand the necessity for sexual consent and healthy relationships, you have already waited too long. Instead, use daily interaction such as this to infuse an understanding of consent and empathy into your child's understanding of respectful relationships.

Teach kids that their bodies belong to them

Tell them that their bodies are theirs, and that no one should touch them without permission. Teach them what touches are appropriate and when, and that if anyone touches (or tries to touch) them in a way that is inappropriate they should tell you...even if the other person says not to. It is important to start telling children early, and to tell them often, that their bodies are theirs.

Just as important is modeling respect for your own body and their body. Forcing your child to comply with an adult (or child) who wants to do something to their body can teach them that they have no control over that body. Don't force a child to hug or kiss an adult (or other child) or allow someone else to hug or kiss them without their consent. Avoid reinforcing notions like "He probably just likes you, that's why he pulled your hair" or normalizing behaviors like snapping bras, pushing people down on the playground, or other misguided ways of interacting with others.

Lisa McCrohan, a therapist who teaches the importance of mindfulness and intentionality, urges parents to gain their child's consent when interacting with their bodies. For example, asking "May I brush your hair?" rather than brushing their hair without consent. This action serves the dual purpose of teaching the importance of consent to touch and increasing the likelihood that the child will comply (no one likes their hair brushed without being asked).

There will be times where you may feel compelled to force a child to do something they don't want to do either for their own safety, the safety of others, their health, or your sanity. Asking a child "Will you hold my hand?" when the alternative is that they will run into traffic, is not logical; however, when there is no danger, asking shows your regard for their autonomy. The important thing to keep in mind is to be intentional and thoughtful in parenting situations. Rather than restraining a frightened child at the doctor, talk them through what is happening and why they need to allow the doctor to look in their ear or give them a vaccination. Even something as simple as telling a child "I'm going to pick you up so we can walk a little faster" shows respect rather than force.

No means no...even if it started as yes

Sometimes, a child just doesn't want to be touched (or, they're done being touched). If you ask to hug, hold, kiss, cuddle, tickle, etc., and they say no, and they are not in danger of harming themselves or someone else (think of the traffic example from earlier), don't force the issue. You want them to be able to say no and to respect the wishes of others, and showing respect for their wishes models that desire.

In all likelihood, our duck-friend, Missy wasn't initially bothered about being tickled by her brother. She probably laughed and thought it was fun. But, at some point, she changed her mind. She decided she was done being tickled, she told her brother to stop, and he didn't stop. Her response was to kick him. While some may argue that kicking is too far, what was the alternative? To let him keep tickling her until he was bored? Wait until he stopped and then go tell on him? The parent in this situation had a wonderful opportunity to teach both children an invaluable lesson: No means no. When they hear no, they assume the person who says it, means it, even if they said yes first.

Despite what may show up in the content of some very unsettling internet memes, no doesn't mean "convince me." No means no. Even though you may have your feelings hurt if your child doesn't want to hug you tonight or your dad might be sad that his granddaughter doesn't want to kiss him goodbye, trying to convince them to do it anyway or attempting to make them feel guilty for NOT doing what is asked shows that you are not respectful of their "no." If your child tells you they don't want to do something with their body, ask them why or what they are feeling and let them tell you. Sometimes, the initial response may be to try to convince them to change their minds or ignore their feelings. Let them tell you their feelings and opinions. Really listen to them. Look at them, let them sit next to you, show that you are present. If they can talk to you about the "small" issues of early childhood like being upset with you, how their friend acted at school, discomfort with activities, or frustration with siblings, they will learn that they can talk to you about the bigger issues they will encounter as they get older. Listening and showing respect for your child's feelings teaches them that they are important and worth listening to. It shows them that you have their back. If they know that you will back them up and support them, they will have the confidence to say no to someone else and mean it. They will learn to take no for an answer from others. They will learn to expect respect from those around them, and they will avoid people who don't show it.