Swollen by heavy rains, both here and farther upstream, the Arkansas River inundated areas all along its banks in late May and early June this year.  The rising waters crested around Little Rock at just under 30 feet on Wednesday, June 5, but took nearly another week to recede from low-lying areas.  One of those areas,Two Rivers Park, sat under water for over a week.

Located at the confluence of the Arkansas River and the Little Maumelle River, this park is a popular part of the riverfront's hiking and biking trail system.  Co-owned by the city of Little Rock and Pulaski County, the park is comprised of 1000 acres of woodland, wetlands, and open fields.  It is also home to a large community garden, with more than 450 small plots.  Locals can rent a piece of ground from the county and tend their own fruits and veggies if they don't have a suitable back yard of their own.  Two Rivers is also home to an apiary stocked with some of the UA CES honey bee colonies.  The resident bees provide gardeners with valuable pollination services, and are also used for research and educational programs.

When waters were predicted to rise, we moved the bees off of their usual hive stands, and up onto a solid stack of cinder blocks to ride out the storm.  It seemed like a good idea at the time.  Even if the ground got a little soggy, surely there was no way the water would ever get more than three feet high here, right?

Enclosed behind a 6-foot wooden fence, the apiary sits about 600 yards from the riverbank, in an area that is usually lush with spring flowers for the bees to visit.  Of course, that's a horizontal distance.  Vertically, they sit just a couple of yards above the water level under normal conditions.  What's the worst that could happen?  Right?  That was May 28.

What's the worst that could happen?

A few days later the Sheriff's Department released drone video footage of the growing disaster area.  As the mass of water moved down stream from Fort Smith, many Central Arkansas homes on the river were being inundated, and the low-lying park and garden were flooding.  The apiary wasn't visible in the video, but it would be just behind the row of cottonwood trees in the photo below, where the waters were continuing to rise.  I had hope that the bees might still be high and dry. 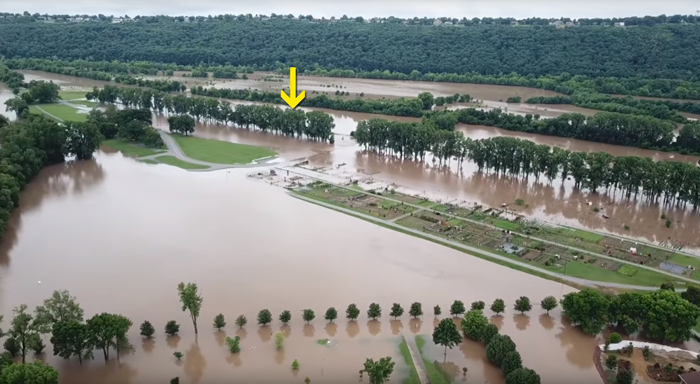 By June 2 more photos and videos were appearing online, showing details of the destruction.  Things looked bad.  The  photo below on the left shows the normal water level at Two Rivers (maps.google.com).  The photo on the right shows conditions on 6/2/2019 (photo by Michael Young).  Red arrows indicate the location of the apiary.

A friend who lives near the park watched the liquid disaster slowly swallow his neighborhood from Walton Heights, on the ridge overlooking the river.  Knowing my concerns for the hives, he sent me several telephoto shots of the rising water.  Things began looking grim and we became resigned to a tragic fate for the hapless bees.  Because the entrance to a bee hive is at the bottom, even a little water could trap them inside.  If stuck in there for too long, they would likely suffocate in the heat, rather than drown.  Of course, the water continued to rise.  As the fence disappeared from view, I just hoped it would hold, and the wooden equipment would at least bob around inside the enclosure and not float away. 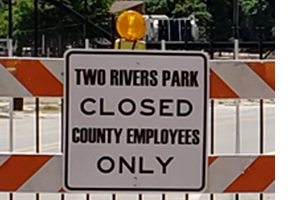 Even after the water began to recede, it was another week before the road was open for residents and park officials to return and begin to assess damage to the area.  The park is still closed to the public while clean-up is underway.  I was able to get in on June 11 to hopefully salvage some of the woodenware and other equipment.

Inside the gates, the community gardens were a disaster.  More than an inch of mud and silt had been deposited on every surface.  Many fences had been torn town by force of water and debris that swept through.  While some sheds and structures appeared intact, others were on their sides, in pieces, or just plain gone.

The fence around our bee hives was still intact, but everything inside as a mess.  Everything was covered in mud and silt, and a foul, rotting smell pervaded the air.  The remains of the bee hives were jumbled in one corner.  An inventory of the woodenware revealed the bottom boards of the hives were gone, as well as some hive boxes, a lid and inner cover.   A number of 4x4 posts and other lumber, used for hive stands, had all floated away.

Amazingly, there were still some honey bees alive in one of the boxes!  From the waterline on the outside of the hive, this box must have been floating at an angle, and the surviving bees moved into the only dry spot they could find.  The heavy wooden lid had came off at some point, which floated away, exposing the bees to the open air.  They normally would not like that, but the fresh air must have come as some relief to them at that point.  Luckily the rains had probably stopped by then.  These poor hapless bees rode the waves, bobbing around inside the fence for at least a week, until the receding water finally dumped everything into a haphazard pile in the mud.

Luckily I had an extra hive body in my truck, and I was able to put the live bees into a clean new box with new frames.  For some reason they were not in a good mood, and I made use of a full bee suit and gloves, with plenty of smoke.  With a little care, this colony will rebound and be ready for next year's gardening season.

I also gave them some sugar syrup to tide them over for now.  There is not much blooming in the park right now, for obvious reasons.  All vegetation below the water line was dead, although the tops of some taller climbing vines and fruit trees still had green tops, and may come back.

There were a few mimosa trees, some climbing roses, and a surviving butterfly bush still blooming and covered with a variety of bees and wasps.  I was surprised to see so many bumble bees.  I would have expected most species of ground-nesting bees to have been drowned or washed away in the deluge.  Some native bee species remain underground in a dormant state for extended periods, and may have survived, but it may a couple of years for the native bee populations to fully return.  Other signs of the park's wildlife were apparent everywhere.  Plenty of songbirds were present, some in surviving birdhouses and in the trees.  Many birds, as well as the park's ubiquitous deer population had left their tracks in the thick mud that covered everything.

Some homeowners may now be reconsidering their decision to build so close to the water, and some of the park's gardeners may hesitate to renew their leases.  But the wildlife will return, as well as the area's many cyclists, runners and casual walkers who will be back to enjoy the beauty of this unique recreational spot as soon as the gates open up again. 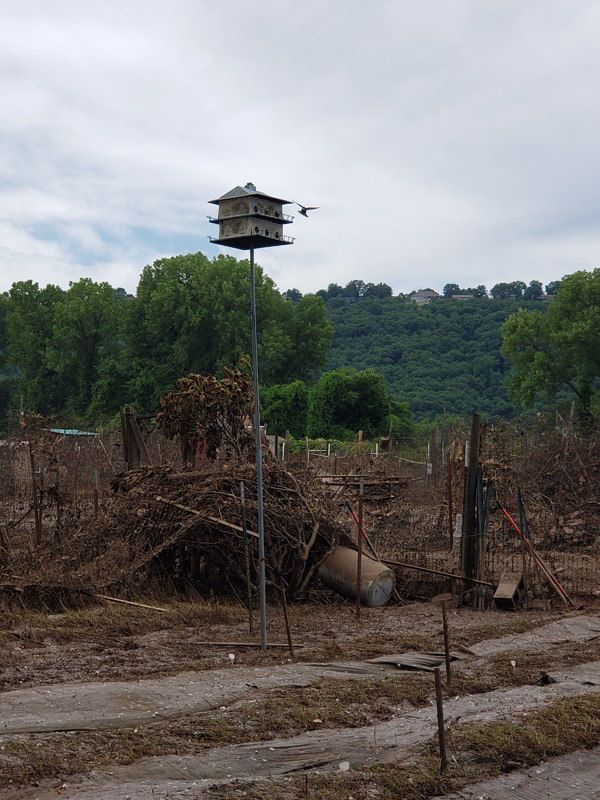 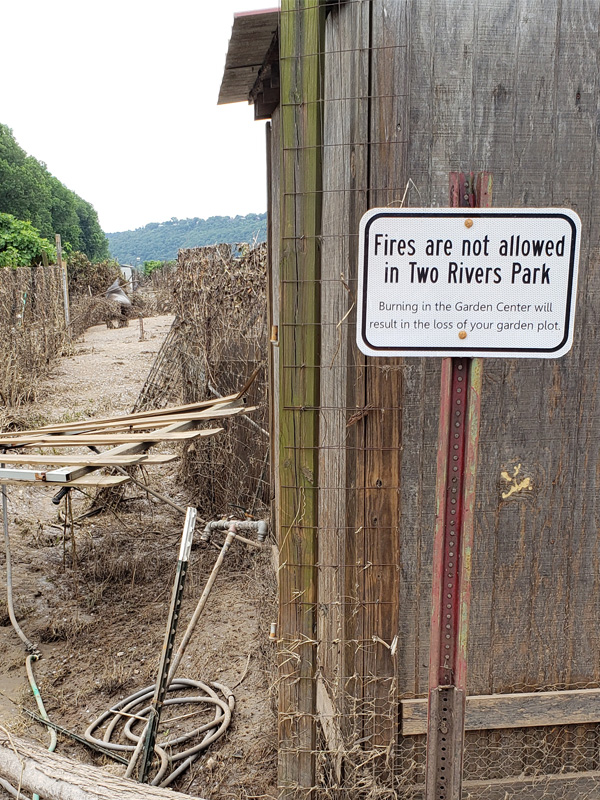 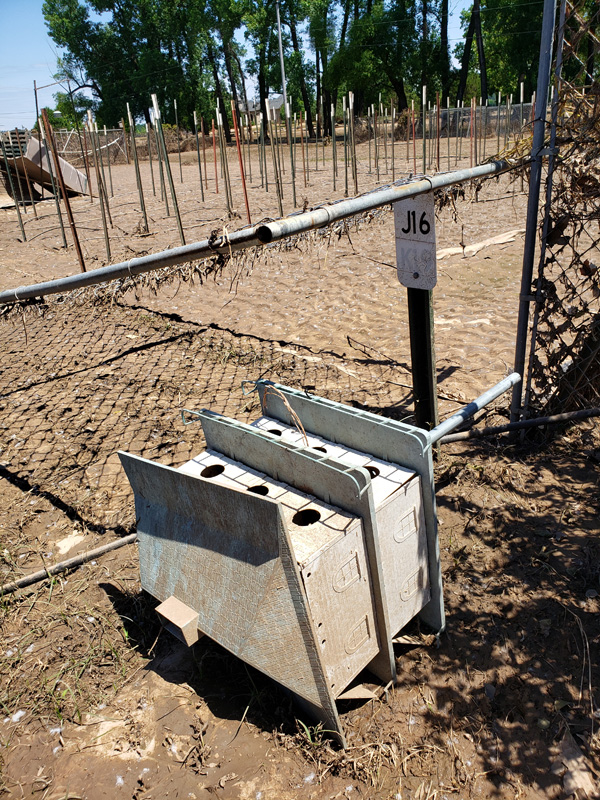 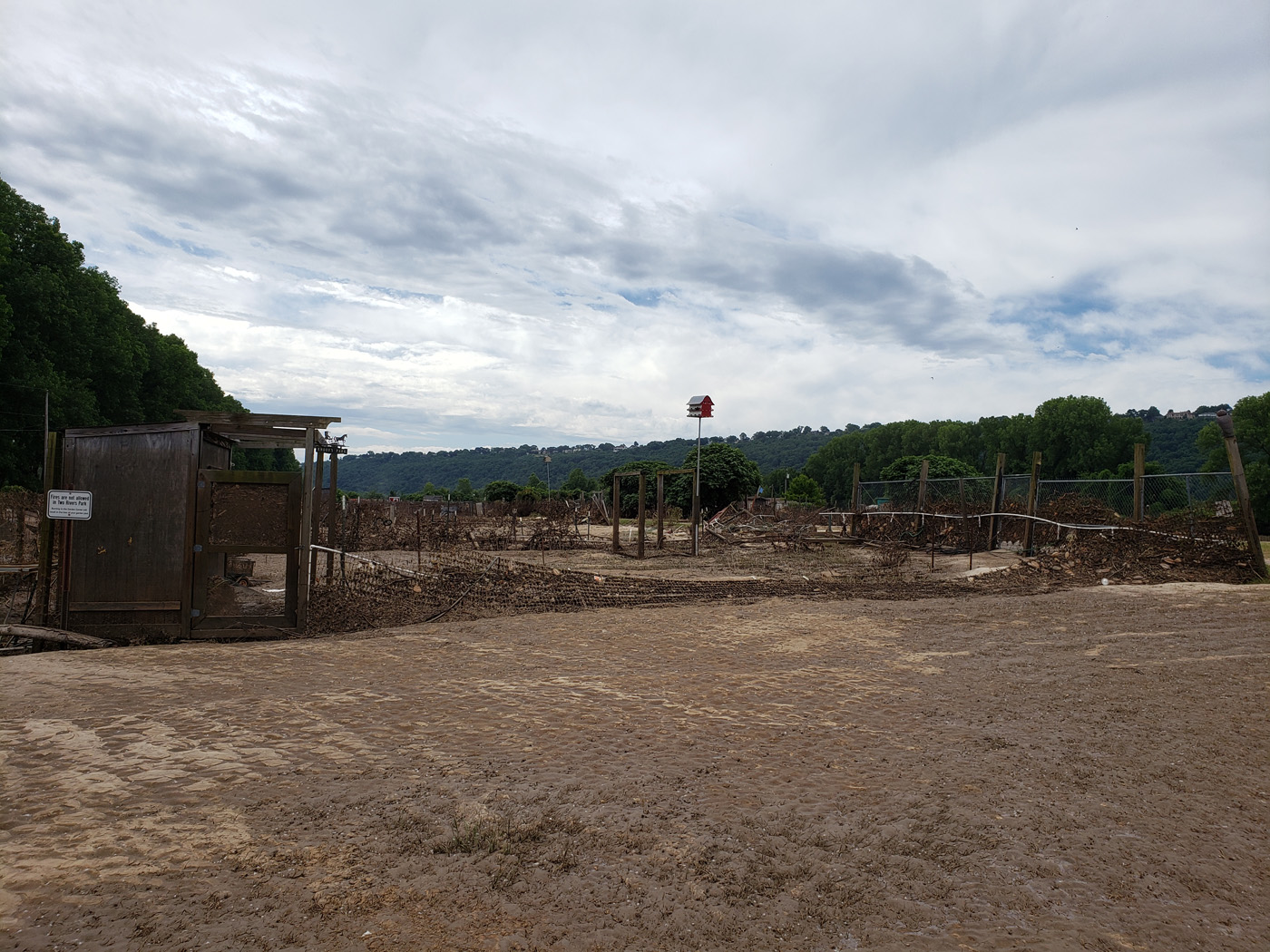 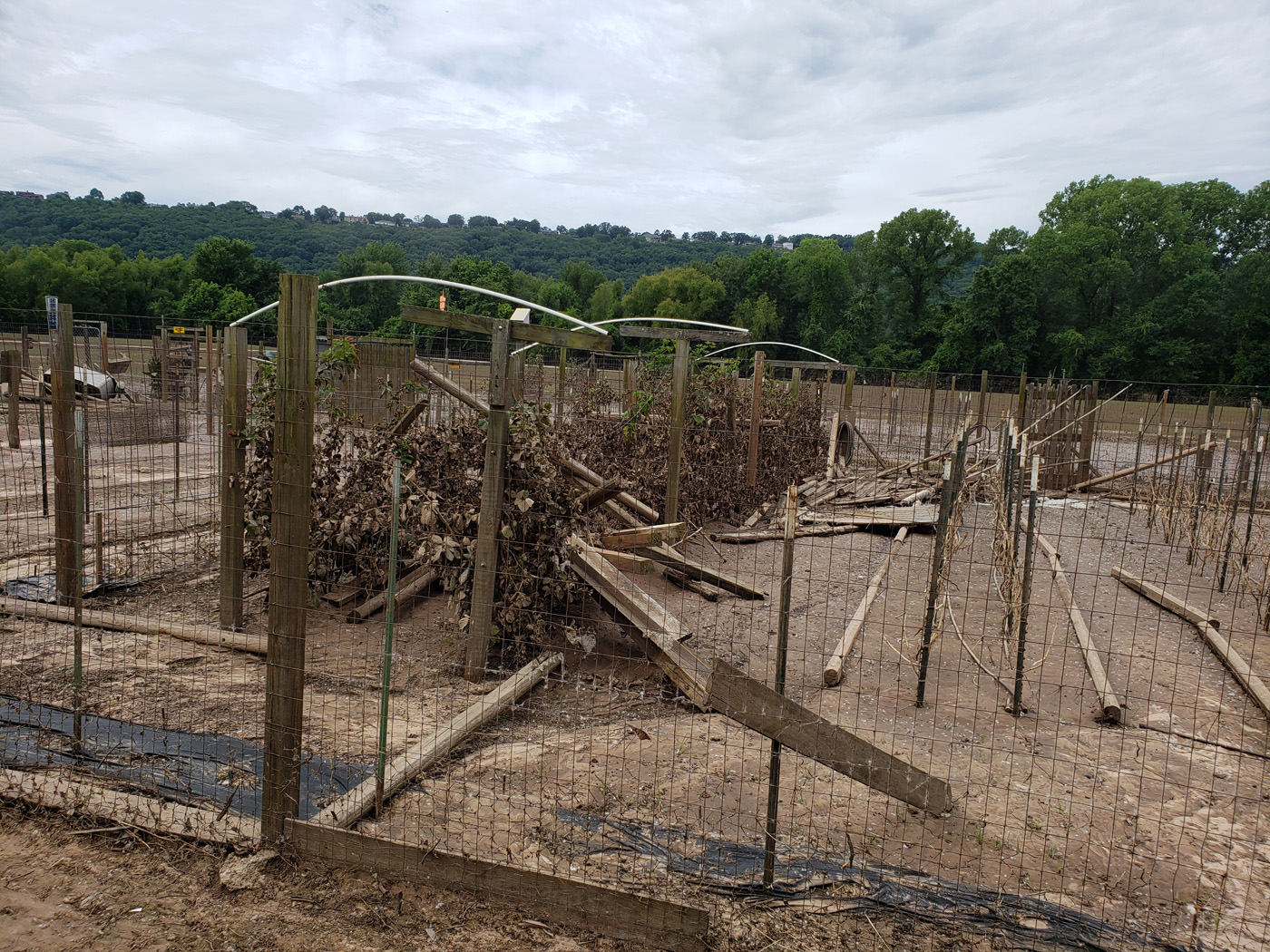 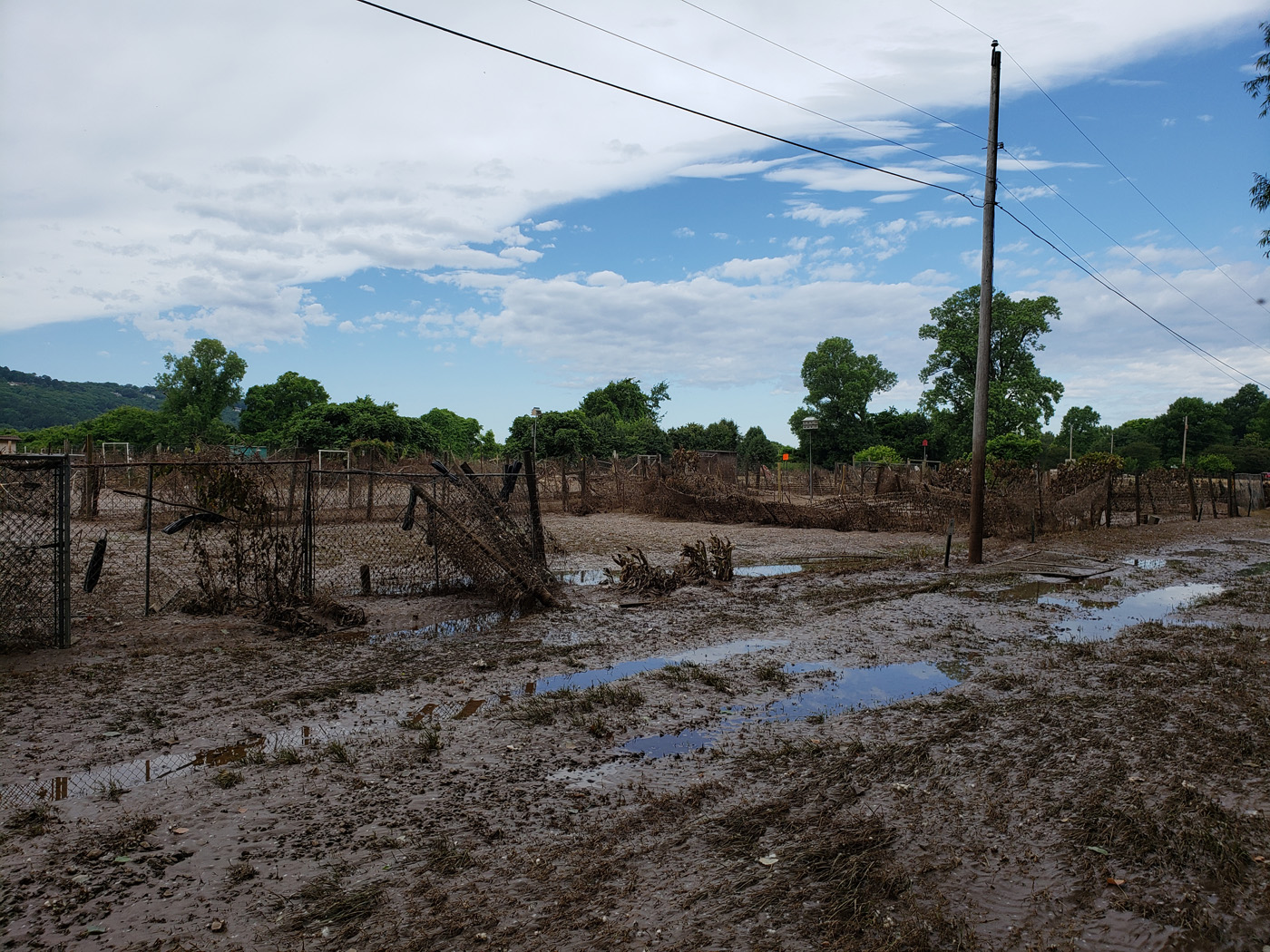 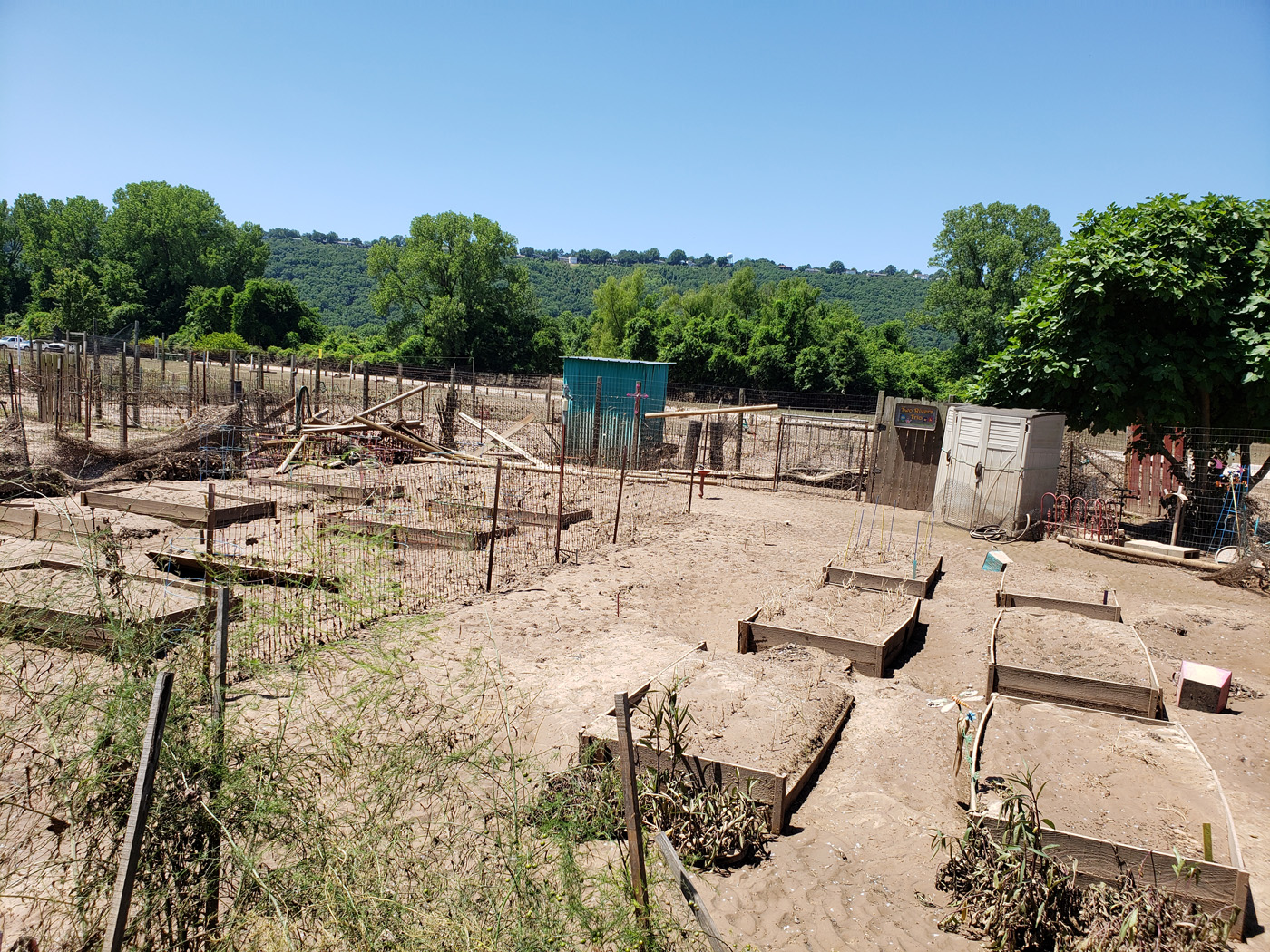 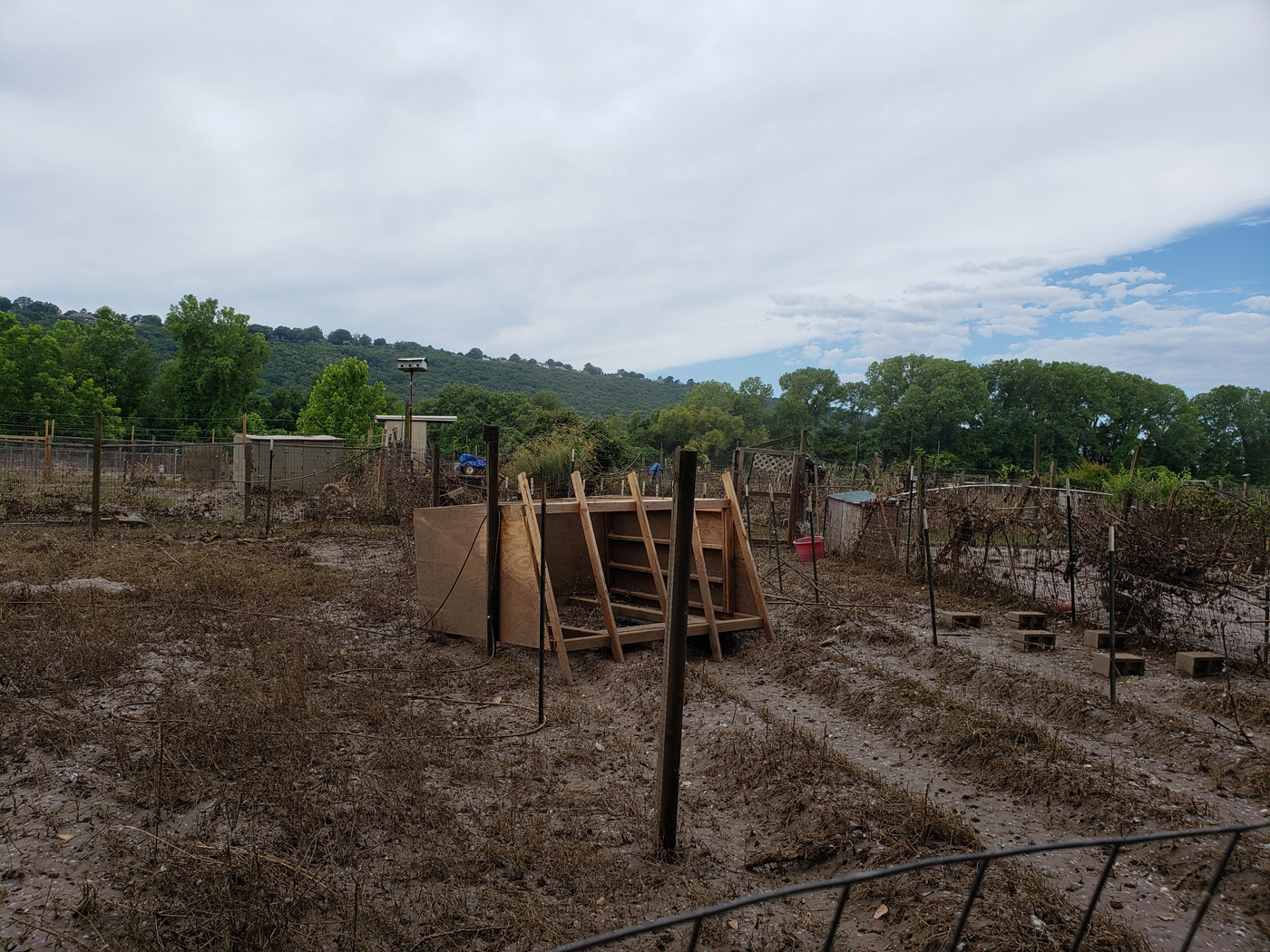 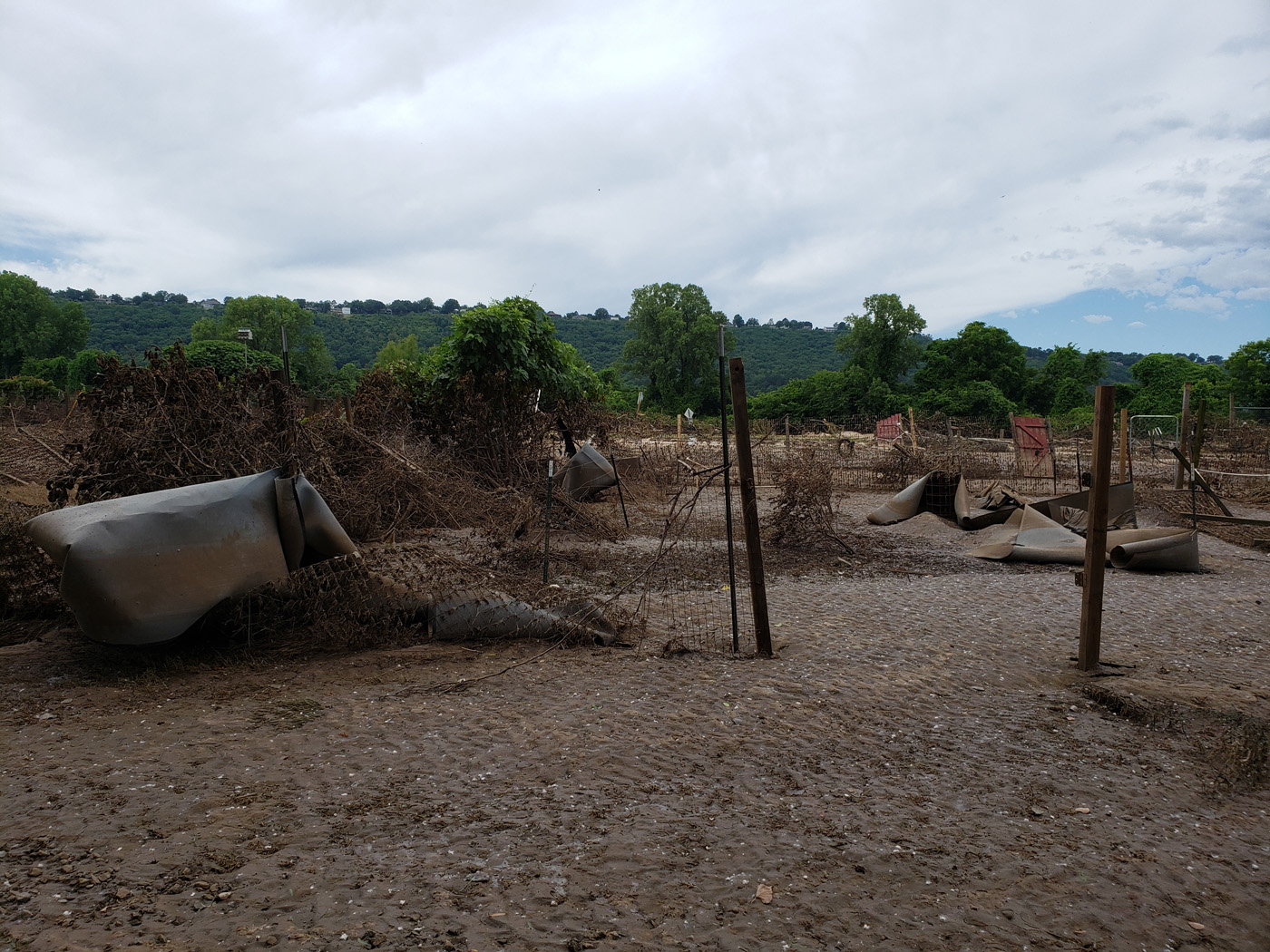 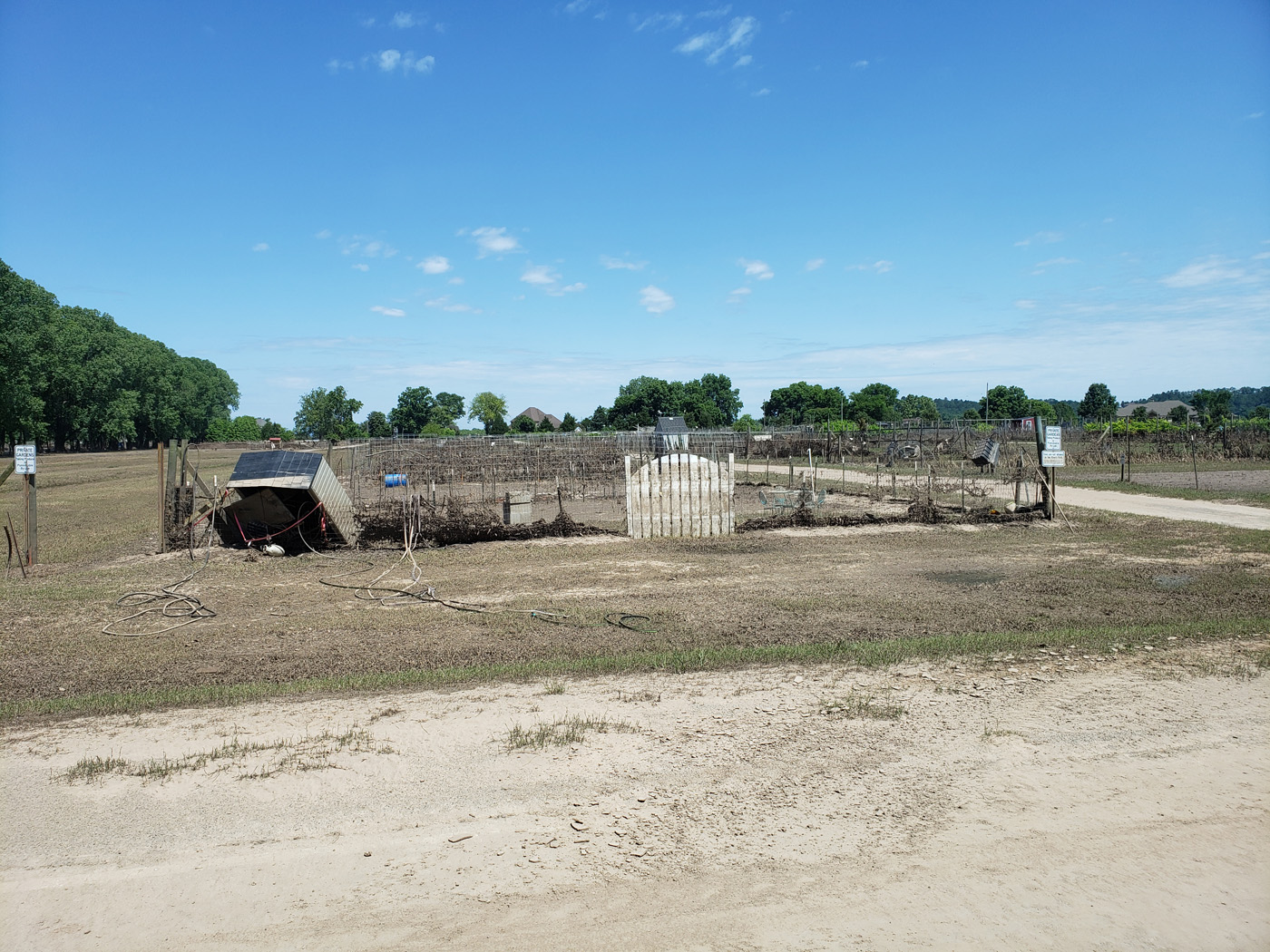 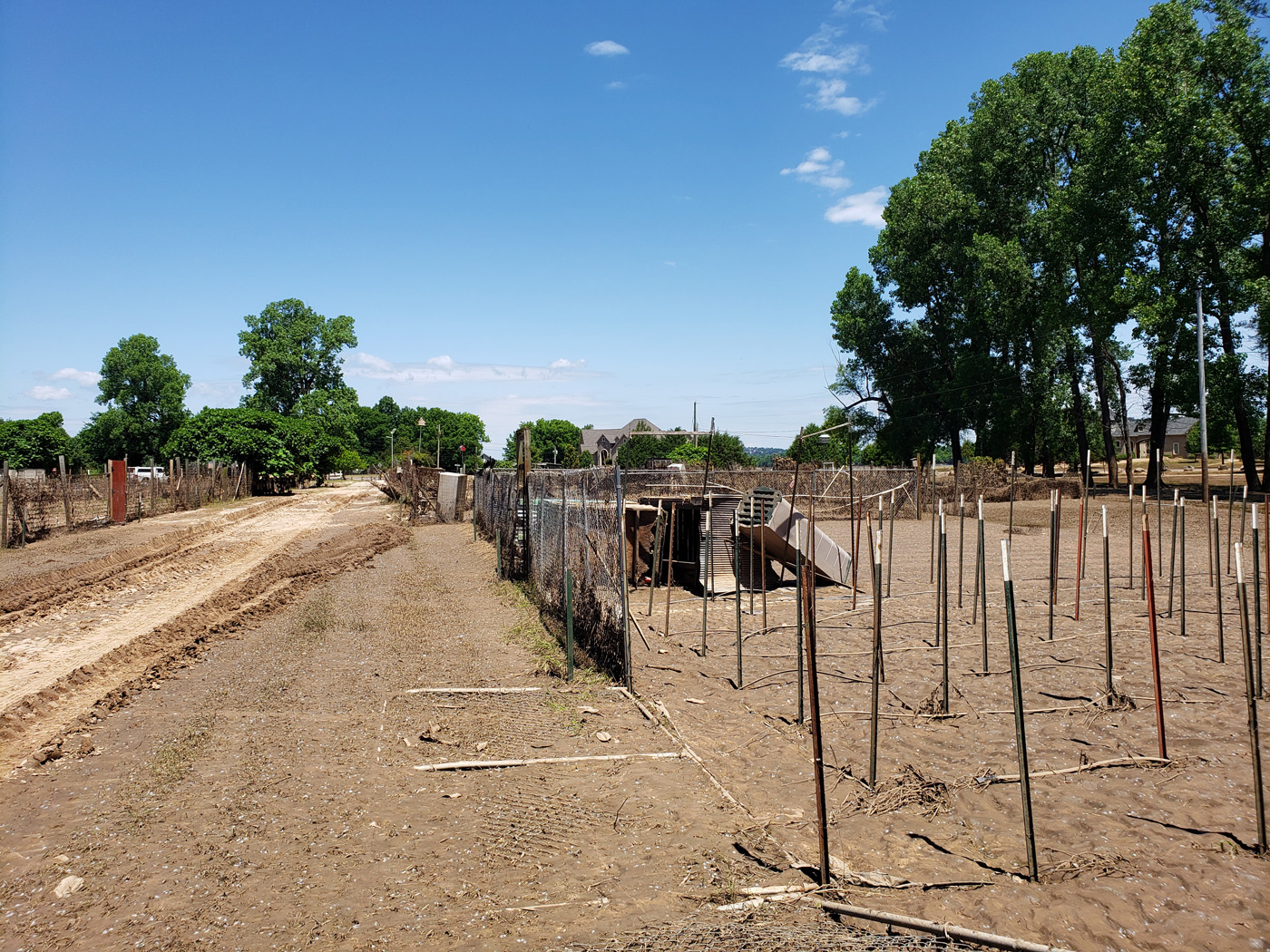 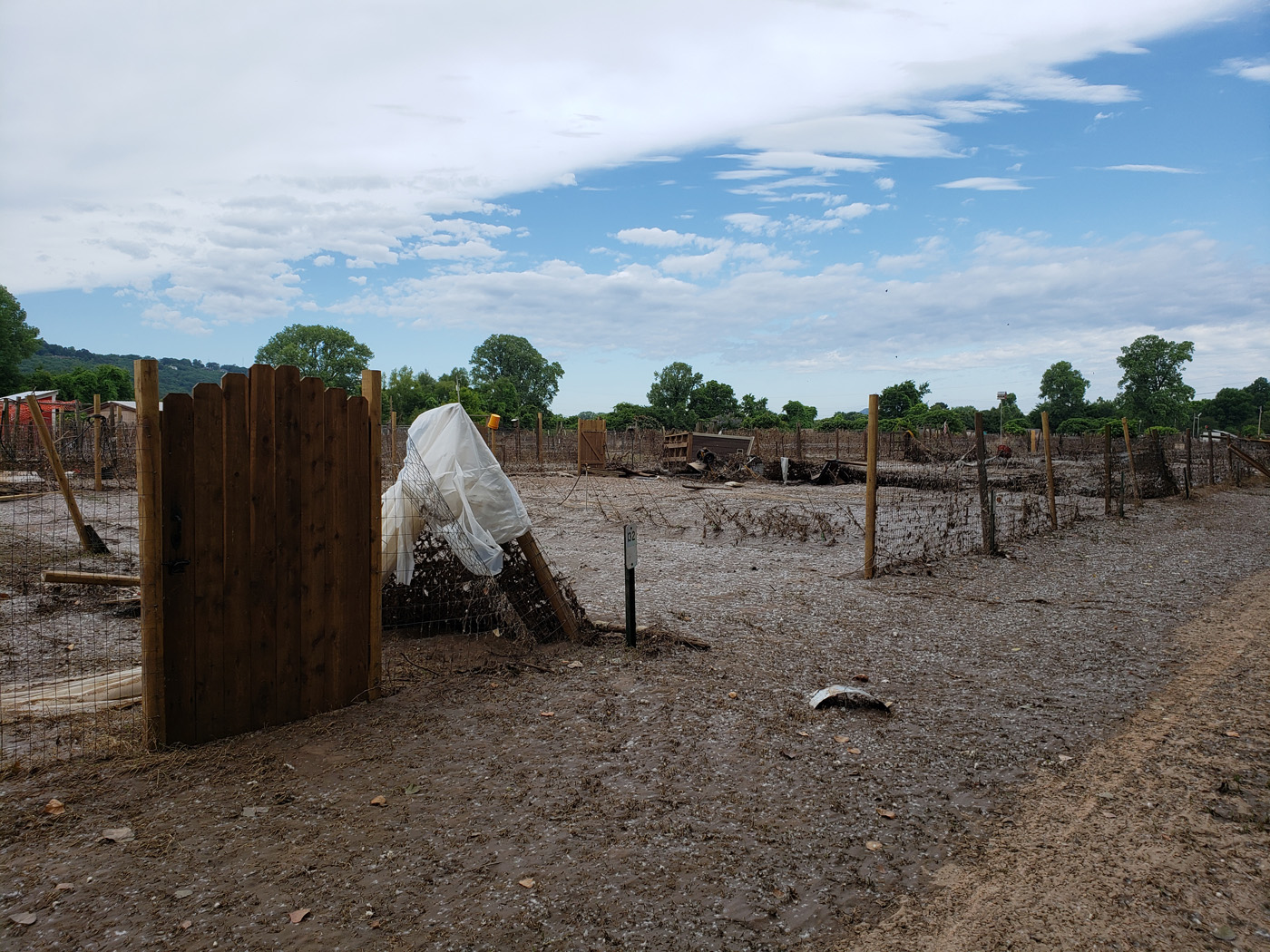 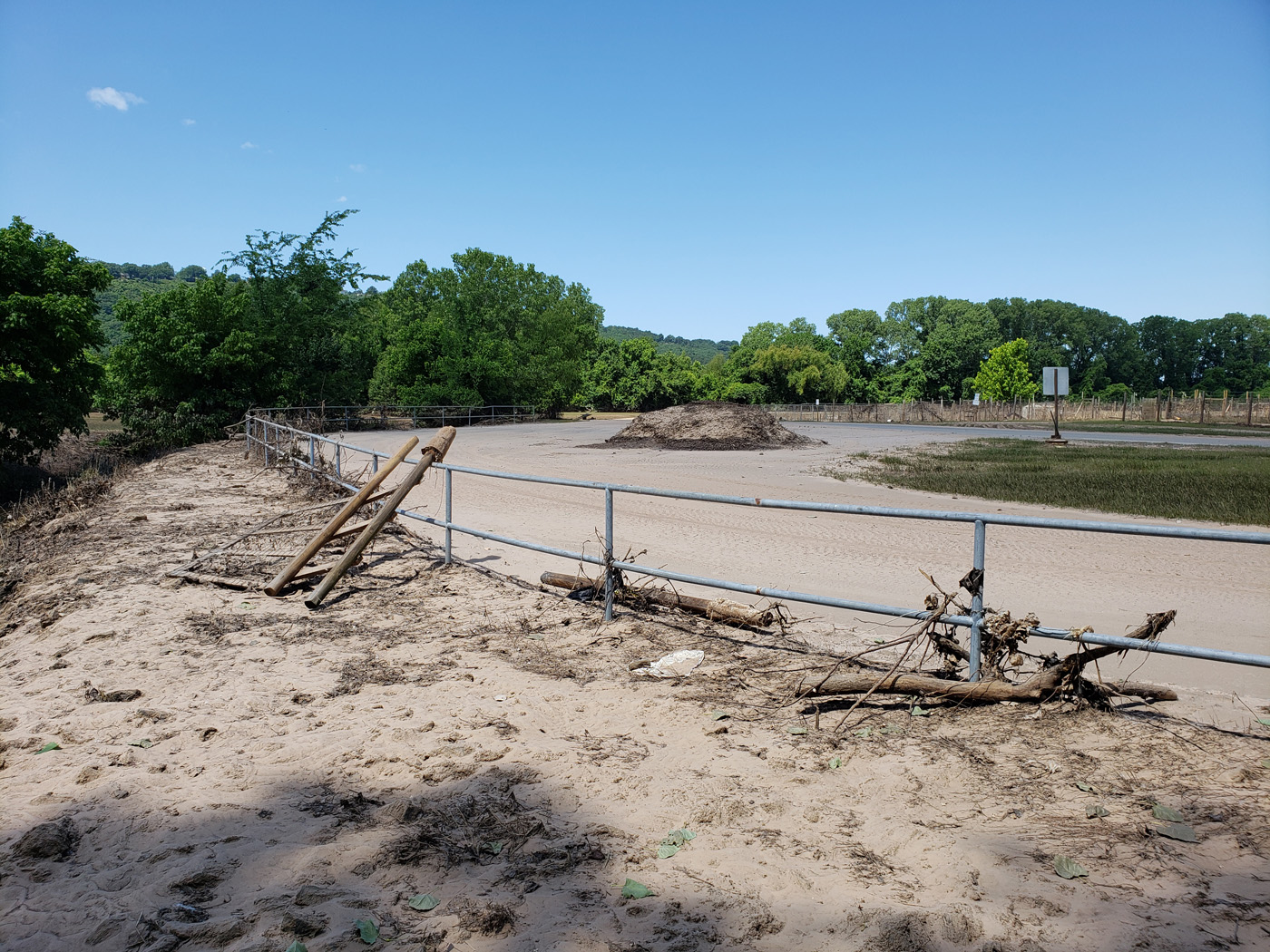 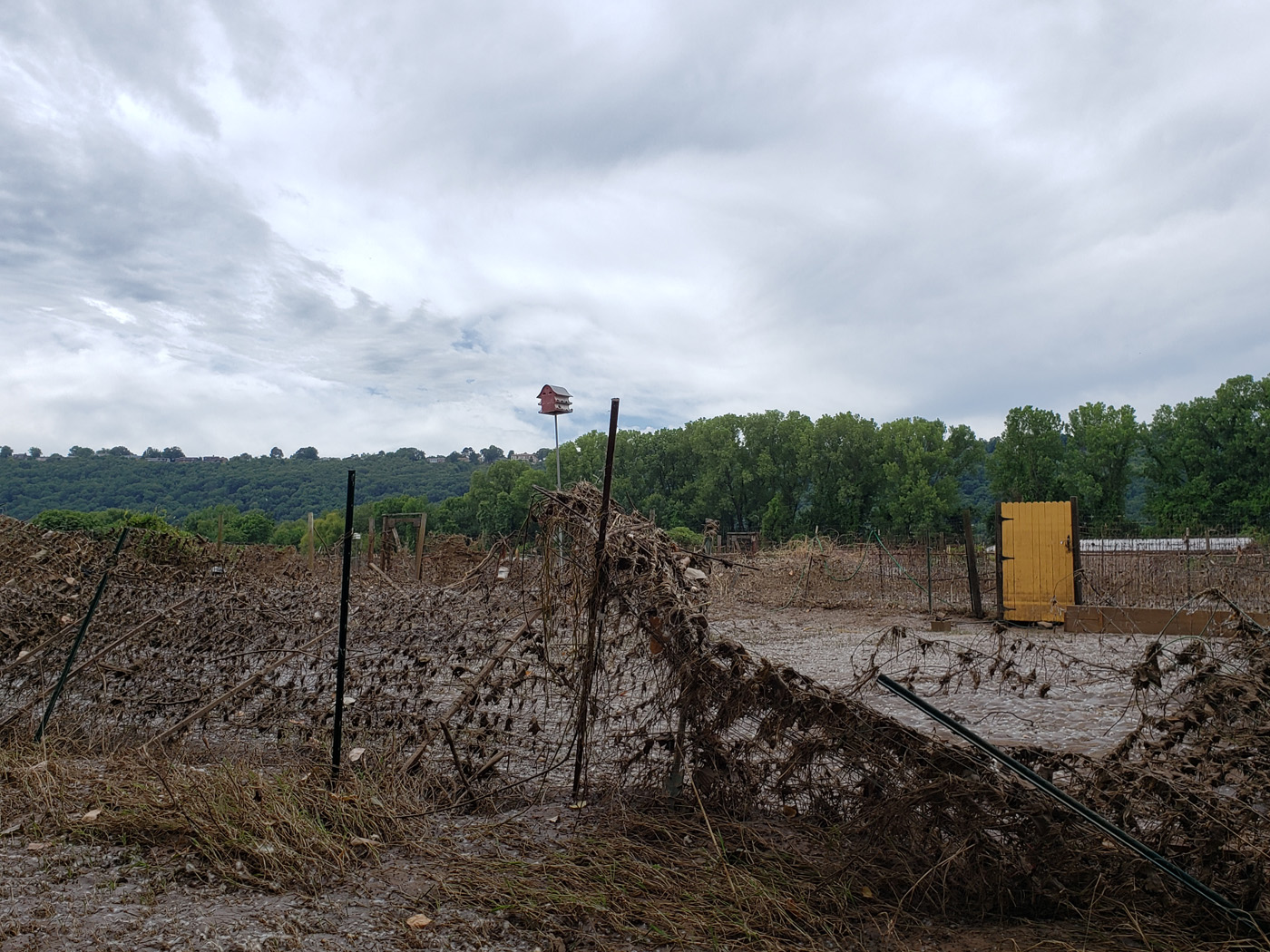 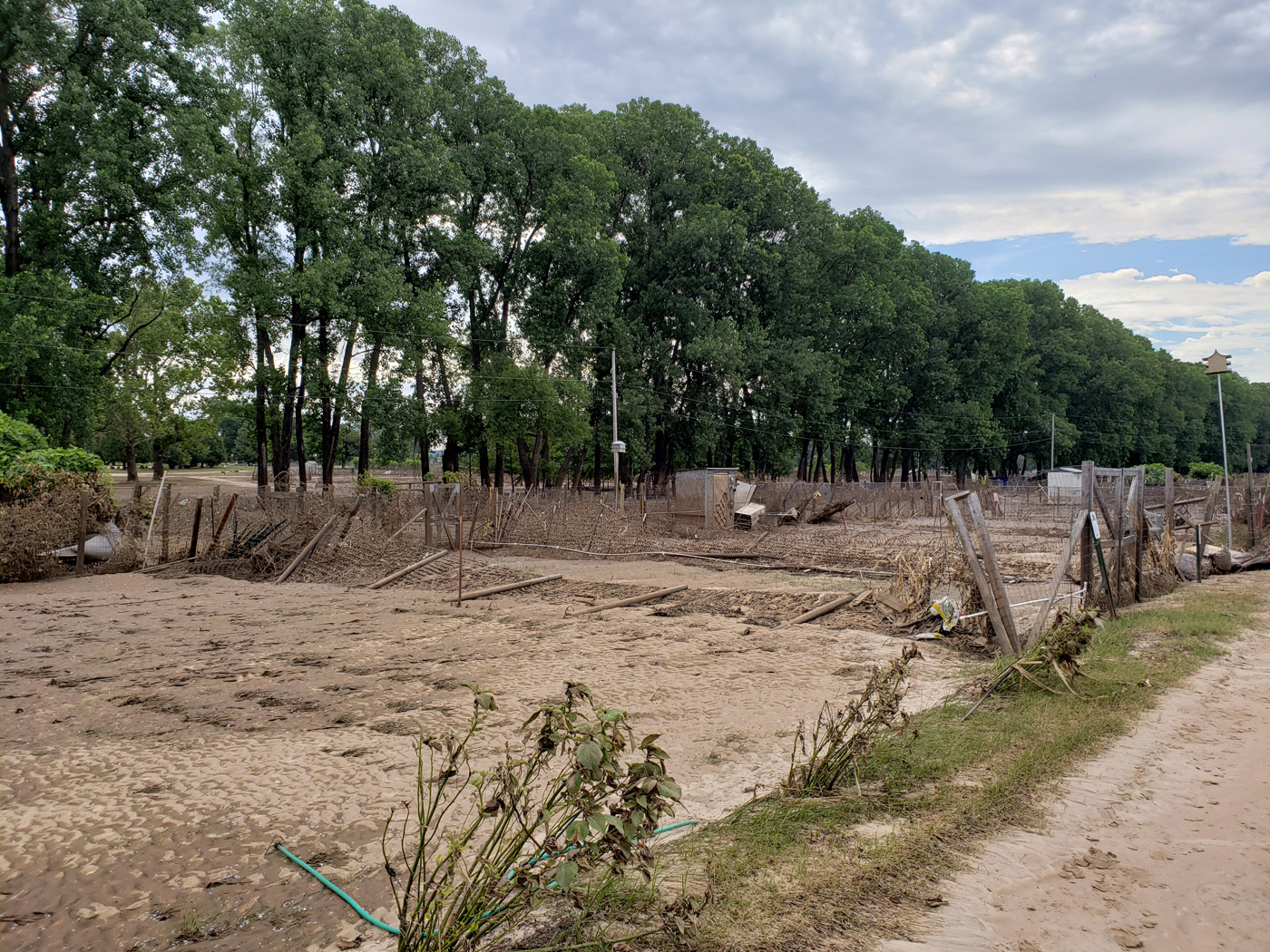