Honey... Worth the Wait 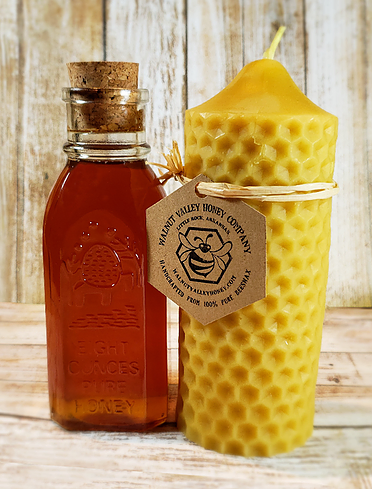 Gifts from the bees:  sweetness and light.

Honey.  that's what it's all about, right?  I mean, it's in the name: honey bees.  Out of 20,000 species of bees in the world, there are only 8 recognized as honey bees.  And 7 of those are found in Asia.  Only the Western Honey Bee (Apis mellifera) is found here.  Originally native to Africa and Europe, she was introduced to North America in the early 1600s, and later into South America, Australia, and even into Asia, where it has become the most popular honey bee, because it is the most productive.

These are the only bees we keep for honey in the U.S.  They make honey as well as beeswax, the highest quality wax for candle making, with the highest melting point.  Bees also gather propolis, a sticky resin produced by trees, which has antimicrobial properties.  The honey bees gather and use it to keep their hive clean and sterile.  Humans can also collect it as another product of the bee hive, and it may hold the potential to develop new drugs.

Much of Arkansas has a brief, intense spring nectar flow, followed by a hot, dry summer.  The nectar flow, also called the honey flow, is the magical time of year for beekeepers when the weather cooperates to produce an abundance of spring flowers everywhere.  The honey bees respond to favorable conditions by increasing their populations exponentially, so they can bring home as much of that nectar as they possibly can.  Beekeepers also respond by adding extra boxes onto their bee hives, called honey supers, to increase the internal volume and storage capacity. 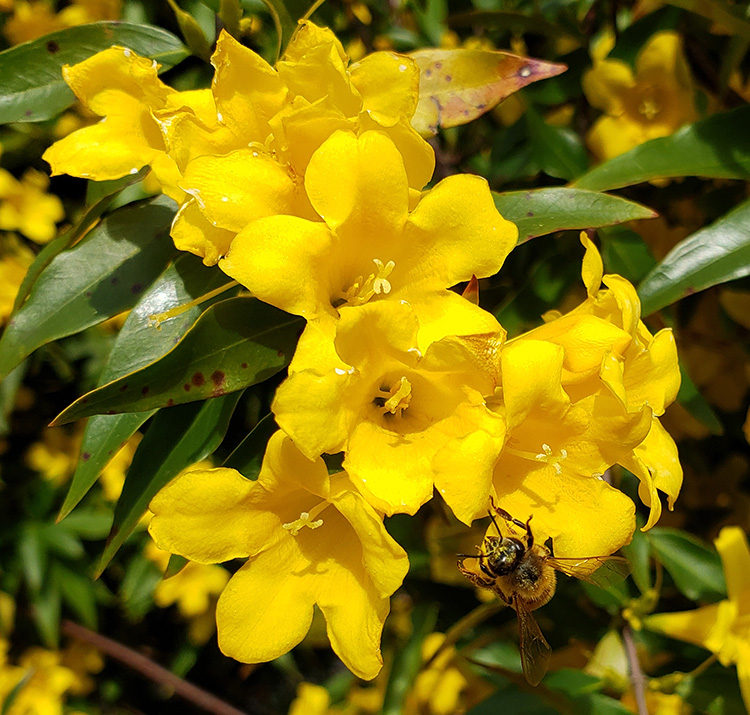 Honey bees collect as much nectar as they can during the spring nectar flow.

The actual dates vary each year by as much as a couple of weeks every year with unique weather, and it begins a little later the further north our bee hives are located.  But the honey flow for much of our state typically runs from about mid-April to mid-June.  This is when temperatures stay warm enough for bees to fly and flowers to bloom profusely, and we get enough rain to keep things green.  Around the middle of the summer our weather tends to stay hot and dry and wild flowers become more scarce.  This is called a nectar dearth by beekeepers, and the bees may consume more honey than they are gathering.

In agricultural parts of the state, abundant farmland can sometimes keep the nectar flow going for quite a while longer.  Crops like soybeans and cotton begin bloom right around the time spring wildflowers are disappearing.  Also, when fields are irrigated, many wildflowers can continue to grow and bloom along the edges of the farm fields as long as they are not destroyed by herbicides drifting from the crops.  This has become a serious issue in recent years in many places -- especially in Arkansas.

When conditions are good, bee colonies can produce a tremendous crop of honey.

A beekeeper's job is to know what to do for the bees, and when to do it.

Right now, the end of this year's spring honey flow is in sight.  And soon we will harvest that golden delicious goodness we call honey.  But not until it's ready!

Making honey is quite a process.

Fresh nectar is very high in water - up to 80%!  The bees "ripen" the honey by removing most of the water from the nectar.  By bringing the moisture content below 20%, the honey will take up much less space in the hive -- a more efficient use of storage space!  Also, the bees add an enzyme (invertase) which breaks the molecules of sucrose (the main sugar in nectar) and turns it into a mixture of glucose and fructose (the primary sugars in honey).

When the honey is fully ripened, it has too little moisture in it to ferment, and it becomes naturally antiseptic, killing bacteria on contact by reverse osmosis.  In fact, honey has been used as a folk medicine around the world since prehistory because it kills germs so well.  The bees seal up each honeycomb cell with a little beeswax lid to prevent it from reabsorbing moisture from the humidity in the air.  That's right, bees invented canned food! 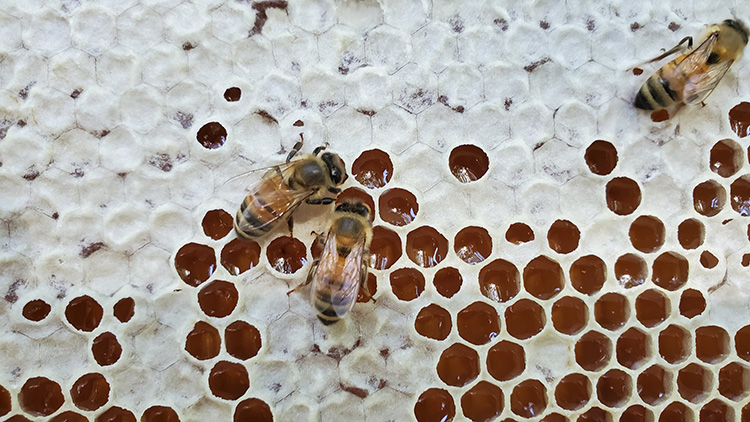 The bees cap each honey cell individually when they determine it is just right.

When the honey is all capped, that's the bee's way of telling us it's ready!  But, as they say, the waiting is the hardest part.  Beekeepers are checking their hives right now across the region, to see if their honey has all been capped.  If we find that it's not ready yet, we close up the hive and come back in another week.  Harvesting honey too early is risky.  It looks great, smells sweet, and tastes amazing.  But if we bottle unripe honey, it may ferment due to naturally occurring yeast cells that are present everywhere.  When the moisture level is low enough, these yeasts cannot become active.  But if the honey has not been ripened properly, we may find that a layer of bubbly froth has appeared on the top.  Open the jar and you will be greeted with a faint but distinct alcohol aroma you may associate with bread dough rising.  Bottling unripe honey may have been the origin for the popular and ancient drink called mead, a fermented beverage sometimes called honey wine.  If that is your goal, there are better recipes than that.

To harvest, the beekeepers will politely ask the bees to step away from their own honey.

This can be accomplished with the odor of a substance the bees do not like.  A number of these products contain almond oil, which smells sweet to us, but apparently bees can't stand, and they quickly move out of the way without harm.  Then the beekeeper can remove entire honey supers without bees.  The next step is to uncap the honey -- to remove the wax lids on each cell.  This beeswax is usually very clean and light in color, and can separated for use in cosmetics such as lip balm or hand cream.  The uncapped honeycombs are placed in a machine called an extractor, and spun.  Centrifugal force removes the honey, and the clean combs can be stored and put back on the hive when they are needed again.

Large beekeeping operations, of course, may harvest honey continuously for days or weeks, or even months, removing it from the hives as it becomes ready.  But the whole process of harvesting and extracting honey can be a messy and time consuming job.  So many hobbyists, who may not have a dedicated honey house, tend to wait and only extract their honey once a year, when it's all ready.  This way they only have to requisition their garage or kitchen for the purpose for just a single weekend.

One taste of freshly harvested honey and you'll understand.

Producing and harvesting honey is work - for both the bees and the beekeepers.  But it's also a labor of love.

You probably already know how a home-grown tomato is so far and away superior to a tough pink store-bought "tomato" that they shouldn't even be in the same category.  If you don't know that, you have truly missed out on one of life's small joys.  And the same goes for honey.  Once you have spoiled your taste buds with your own fresh backyard honey, still warm from being in the hive, you will never again be able to go back to that store bought stuff.  Beekeepers (and their families and friends) love harvesting honey.  It's a heavily anticipated reward for a job well done of keeping our bee colonies healthy and productive.  In fact, you may have to keep a close eye on some of your help, or they may go full Winnie-the-Pooh on your freshly extracted buckets of honey!

Remember how you felt as a child, when the Christmas tree was put up, and festively wrapped gifts began to appear under it, but you couldn't touch anything yet.  All you could do was surreptitiously rattle a few boxes on the sly.  Or think how you feel when you are waiting for your dinner in a restaurant, watching other tables being served, while tantalizing scents wafting waft from the kitchen.  Your appetite is intense, but it's not yet your turn.  That's how beekeepers are feeling right now.

We want that honey.  We want to pour it over everything or just eat it with a spoon.  We know you (our loyal customers) want fresh, rich golden delicious raw honey, and we genuinely want to bottle it up for you.  But it's just not ready yet.  I recently checked all my hives just for you.  A lot of the honey is capped, but plenty of it is not yet ready.  So we had to close it all back up and wait again.  We're in this together.

The anticipation will make it that much better, right?