Bees Buzz About Coffee and Cigarettes? 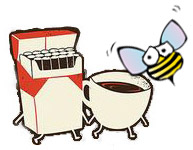 Long popular with people, it seems that bees also enjoy both caffeine and nicotine.  Several studies over the past few years are trying to understand why.  While bees may have trouble getting their tiny hands on little cigarettes and shots of espresso, some flower, it seems, will provide these chemicals naturally in their nectar.  Nectar is primarily sugar and water, but contains traces of many other substances, including some nutrients, and other compounds that could be toxic at higher concentrations.

The manufacture of any substance by a plant comes as a metabolic expense in plant energy and resources, and presumably should provide some benefit to the plant, or it would not have developed a presence through natural selection.  Plants produce a wide variety of chemical compounds (alkaloids, phenols and terpenes, to name a few) in their foliage to dissuade herbivorous insects and animals from eating them.  Humans, of course, have come to identify and utilize many of these compounds by incorporating small quantities of herbs and spices into our diet for flavor, or utilizing others for medicinal (or even recreational) properties.  Lacing foliage with toxins often works to prevent damage from generalist feeders, but may also drive the evolution of specialist feeders.

Consider the monarch butterfly, which will only deposit eggs on milkweed plants, the sole food for their caterpillars.  Milkweed is toxic to most other insects, but monarch larvae have developed a strategy to sequester and store those toxins (called cardenolides), and weaponize them.  They store the toxins bodily, making the adult monarchs extremely distasteful to birds.  The plants do get munched by caterpillars, but they will also benefit from pollination by the adult butterflies.  Adult monarchs, still packing cardenolides, are avoided by hungry birds, who quickly learn to recognize them.  The viceroy butterfly, looking remarkably similar to monarchs, are also protected by famously mimicking their toxic cousins.

Izhaki et al. (2010) found that bees prefer visiting flowers that offer nectar containing small quantities of caffeine and/or nicotine over flowers without.  Carefully designed choice tests clearly demonstrated that bees showed a preference for sugar solutions with nicotine concentrations similar to those found in nature over "clean" nectar.  However, nectar with unnaturally high concentrations was avoided by the bees, suggesting that bees can detect these additives, and that Mother Nature has had time to find the optimal level that bees prefer (or at least will tolerate).

This begs the question of why bees would prefer these nectar additives.  Do they provide some benefit to the bees?  Do the plants benefit by getting the bees hooked, ensuring that pollinators will eagerly return to pollinate more flowers?  Does a shot of caffeine provide a bit of energy buzz that helps bees on their busy ways?

In a new study by Baracchi et al. (2017) that used artificial flower choices, bumble bees appeared able to more quickly learn and recognize flowers if the nectar was laced with nicotine, even at very low concentrations. The bees also maintained a preference for the flower even after the nicotine had been removed -- an 'addiction-like' behavior on the par of the bees.  A related investigation had suggested that bumblebees infected by parasites may self-medicate with flower nectar naturally high in nicotine, which could slow down certain infections (Baracchi et al. 2015), but these findings were not clear.

Earlier studies on several natural "psychoactive" secondary compounds in flower nectars suggested that some of these additives may indeed be used by the plant to keep addicted pollinators returning (Singaravelan et al. 2005), but the results were not definitive. However, honey bees did not appear to suffer ill health when fed even large quantities of nicotine for several weeks in a laboratory study (Singaravelan et al. 2006).

Another team of scientists found that nectar with higher caffeine content caused bees to perform more vigorous waggle dances to recruit additional foragers to a potential food source (Couvillon et al. (2015).  This would cause the bees to overly exaggerate the quality of the nectar to her hive mates, resulting in higher recruitment to visit the flowers.  One might consider this to be cheating on the part of the flowers, encouraging bees to return and pollinate when they were actually receiving less nectar as a reward.  In this case the bees may get a little buzz, but the plant receives most of the benefit.  That's a pretty crafty plant!

A study by Kessler et al. (2015) suggested that both honey bees and bumble bees showed a distinct preference for crop flowers containing low doses of neonicotinoid pesticides, although they did reduce consumption of food overall.  This work is of particular interest because of concerns surrounding pollinators and neonicotinoid pesticides. Neonicotinoids are a class of synthetic pesticides based on the molecular structure of nicotine, which was one of the first insecticides ever produced under the brand name Blackleaf 40.

Nicotine and its synthetic counterparts can mimic the neurotransmitter acetylcholine, and in small doses acts as a stimulant (which tobacco users crave).  In larger doses, they cause over-excitement of neurons.  In insects, this over-stimulation of the nervous system causes muscle tissues to exhaust themselves, resulting in death.  Neonicotinoids are among the most widely used pesticides in the world, and are highly effective at killing insects.  They are also currently under intense scrutiny for their potential effects on pollinators, although much published research has been contradictory, and the controversial issue has been highly politicized by numerous activist and industry groups.

While tobacco smoke is known to contain carcinogens, and nicotine in particular is a known poison, the story would be incomplete without mentioning the impker pfeife, or beekeeper's pipe.  This device was used as a traditional bee smoker used by Europeans for many years, perhaps originally used more practically inside indoor bee-houses. Combined with a special bee veil with a small hole in it, the beekeeper clenched his pipe in his teeth and happily puffed calming smoke while working his bees.  The popularity of this this model waned with the adoption of the bellows smoker, but the impker pfeife is still available in Germany and some other places. Some researchers have even suggested tobacco smoke could be a useful tool in detecting and treating the parasitic varroa mites that infest our honey bees.  Perhaps these old beekeepers were onto something, and their bees were always happy to see them, so they could stop working for a moment and eagerly get another puff?