Plant of the Week: Mimosa 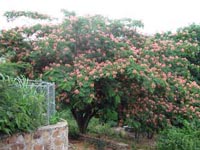 One of my father’s favorite trees was one he called a "Formosa," a tree I learned in college was correctly called Mimosa.

In the arrogance only educated youth can possess, I assumed dad had mixed up the names in the war years of the 1940s when the Nationalist Chinese were taking refuge from Chairman Mao’s communists on "Formosa" - known today as Taiwan.

Now I know that "Formosa" is the Portuguese word for "beautiful", and quite possibly this name was one of the colloquial names used for the tree we call Mimosa.

Mimosa (Albizia julibrissin) is a medium-sized deciduous tree that blooms in the summer and was, at one time, as much a symbol of the southern landscape as the crapemyrtle. But mimosas have fallen from favor amongst southern gardeners and now it is often considered a weed-tree.

Mimosas are capable of reaching 35 feet in height with a spread of 50 feet on old trees. It is usually low-branched, forking from near the ground and makes a great climbing tree for children. Trees seldom live more than 25 or 30 years, but they grow quickly, and once you get started along the mimosa path, you usually have one lurking about somewhere in the border.

The leaves are bipinnately compound with leaflets only slightly larger than a grain of rice. At night on cool evenings, the leaves fold up, helping explain the Chinese name for the tree which is hehuan and translates as "shut happy," symbolizing a happy couple in bed.

The 5- to 7-inch, fragrant, pink powderpuff of blooms appear in July. The mimosa is a member of the legume family; the flowers of this species are acacia-like and consist of numerous, long, showy stamens, not the more familiar pea-flower of the tribe. But when the seed pod develops, its membership in the legume family is obvious. The 6-inch long pods are filled with hard seeds.

These seeds are well protected by their bony exterior and remain viable in the soil for at least five years, and probably much longer. Because the seeds retain this spark of life, mimosas are prone to come up unexpectedly in the garden, abandoned fields or other waste places.

Mimosa is native from Iran to eastern China. Beginning about 1745, the French Jesuit missionary Pierre Nicholas d’Incarville (1706-1757) introduced a number of trees from northern China to western gardens, including tree of heaven, Chinese arborvitae, golden rain tree, Chinese sophora and the mimosa.

In Beijing, he was assigned to the Imperial court as a glass blower inside the walls of the Forbidden City; his religious duties held in abeyance by Emperor Qianlong who ruled during the Qing Dynasty from 1736 to 1795. In 1755 d’Incarville presented the Emperor a plant of Mimosa pudica (Sensitive Plant). The gyrations of this touch-sensitive plant so amused and amazed the Emperor that d’Incarvalle was allowed to roam the gardens of the Forbidden City freely where the Emperor lived with his 40 wives and consorts.

The date given for mimosa’s introduction into the United States is 1745, but this seems suspect as there is no obvious connection between d’Incarville and an American plantsman. It's possible that John Bartram received them from his London correspondent at that early date, but Berkley’s 800-page volume of Bartram’s letters is not indexed by plant names so finding it is hopeless. Mimosa was grown in Mr. Jefferson’s Monticello garden. Possibly he obtained seeds when he served as Ambassador to France during the 1780s.

My father’s fondness for mimosa was due to the tree’s ability to grow large enough to actually make shade on the droughty, shallow soils of our Oklahoma farm. In more hospitable soils throughout the southeastern states, Fusarium wilt has become widespread and kills many mimosas while in their prime. Mimosa webworm is also a serious summertime pest that can defoliate the tree and leave dirty, brownish webs cloaking the naked branches of the tree.

I enjoy the beauty of mimosa in the summertime landscape. But, that doesn’t mean I would want to grow one in my yard. It has naturalized in our climate but is neither overly assertive nor a serious threat as an introduced weed.

For one, I think the summertime landscape of the South is a better place because this Asian import has joined the stewpot of our flora.