Honey bees collect nectar from flowers, and turn it into honey.  Nectar is high in sugar, but also contains a lot of moisture, and is often more than 75% water.  The bees have several reasons to process the nectar, and will lower its moisture content to around 18%.  With much of the water gone, the volume of the resulting honey is greatly reduced, and therefore requires much less space to store inside the hive than it would be as raw nectar.  Also, naturally occurring airborne yeast cells are ubiquitous in the environment, and some will be present in the nectar.  Reducing the moisture content of the nectar prevents these yeasts from becoming active, and prevents the honey from fermenting in the comb.

The video above shows a worker bee beginning the process of transforming the nectar into honey.  Typically a foraging bee will return to her hive with a load of nectar, and divide her load among a number of younger house bees.  Each of these bees will "work" the nectar for several minutes, and begin processing it into honey.  By dividing the nectar into smaller droplets, the same volume has increased surface area, and the moisture can begin to evaporate.  Each bee also adds the enzyme sucrase to the nectar, from her salivary glands. This enzymes chemically alter the molecules of sucrose (the main sugar found in nectar).

Sucrose is a "disaccharide" sugar, composed of two joined 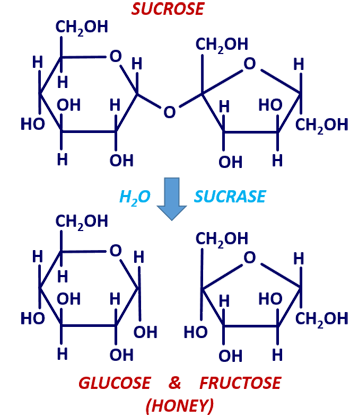 "monosaccharide" sugar molecules.  The bee's enzyme uses a molecule of water and breaks the bond between the smaller structures, helping the bees to transform it into glucose and fructose, the main sugars found in honey. 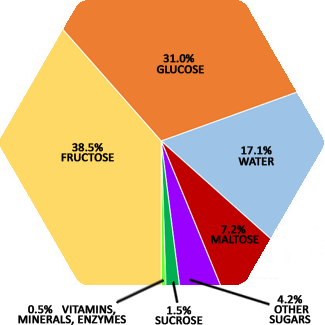 Honey also contains other sugars, as well as some water and traces of enzymes and micronutrients.  The ratio of these sugars varies with each batch of honey, based on the flowers that each hive of bees has been visiting.  Honey with a higher fructose-to-glucose ratio tends to crystallize at a slower rate than honey with higher glucose content.  Other factors, such as the presence of pollen grains in the honey, will also speed up crystallization.  All honey will eventually crystallize, but this does not mean it is ruined. It can be gently warmed in a water bath to melt the crystals, and return it to a liquid state.

Once the bees have begun processing the nectar, they will deposit it into honeycomb cells in the hive, but their job is far from complete.  Many bees work together, fanning their wings, drawing air currents across the surface of the honeycomb.  This air movement draws off further moisture, and ripens the honey.  When the moisture content is low enough to prevent fermentation (usually below 18.6%) the bees will cover each individual cells with a lid made from brand new clean wax.  If the bees did not seal the ripe honey, then it would reabsorb humidity from the air, defeating the bees' work.  In very humid climates, the bees may have trouble getting their honey to ripen effectively.

When the bees have capped off the honey, it will keep virtually forever.  The low moisture level kills bacteria by reverse osmosis. Additionally, honey has a low pH and naturally contains a small amount of hydrogen peroxide.  These properties have helped to make honey useful as a preservative and a folk medicine for many centuries.

When beekeepers see that their colonies have ripened and capped all of the honey, it is time to harvest!  Using a special knife, the beekeeper carefully slices away the cell cappings, and the honey is typically extracted by centrifugal force.  The wax cappings are very clean, and are the ideal beeswax for use in making cosmetics, lip balms, and soaps.