It's spring time in Arkansas again.  We have warm days and lots of new flowers.  That means it's also time for honey bee swarms!  As soon as the weather is warm enough to permit flying (about 55oF or above) bees begin their daily search for fresh flowers for food.  They collect both nectar and pollen to feed their hungry hive.  The nectar, of course is what bees turn into delicious golden honey.  But nectar contains very few nutrients.  Honey is mostly sugars, which bees use as metabolic fuel.  Its the pollen that contain proteins and amino acids, lipids, vitamins, and all the other nutrients growing bees need.

Once fresh pollen begins coming into the hive, worker bees can increase the diet of royal jelly they can feed to their queen.  The queen responds to this increased nutrition by producing more eggs.  These eggs hatch into hungry larvae that must now be fed - with more royal jelly and fresh pollen.  In a couple of weeks, the larvae emerge as mature adult bees, which soon go out and begin foraging for more food for the hive.  The whole process results in exponential growth in bee colony population.  That can lead to overcrowding in a hive with limited space.  All those extra bees contribute to the impulse for the colony to swarm.

There are many factors that influence swarming decisions.  But the queen will ultimately initiate the process by placing an egg in a shallow, downward-facing cell called a queen cup.  These cups are common at the edges and bottom of wax combs, where the honeycombs round over to the other side, but can be found anywhere the comb is poorly drawn or has a hole in it.  If the queen places an egg in of these cells, the workers respond by elongating the cell and provisioning it with ample royal jelly.  The occupied cup is now called a queen cell.  The rich diet fed to the larva in this cell begins it's transformation into a new queen bee. 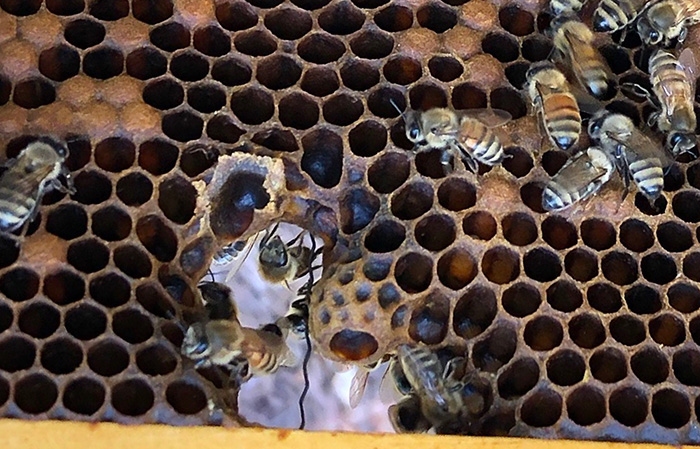 A bee colony preparing to swarm usually creates multiple queen cells over the course of several days.  As the new queens are nearing maturity, the old queen will leave the hive.  She typically usually followed by up to 2/3 of the colony's population.  This is a honey bee swarm, and it can consist of anywhere from 3,000 to 30,000 individuals.  The group of bees will usually fly only a short distance from their hive, and will settle again in a large mass.  They are often seen hanging on a tree limb or fence post, or on the side of a building.

The queen bee will remain safely somewhere inside this cluster, often wandering around.  Sometimes she can be seen, popping out briefly, then disappearing back inside the group.  Most of the bees in this swarm are fairly inactive, conserving their energy and using their bodies to keep their queen safe and protected.  A small number of the bees become scouts, who fly off in all direction looking for a suitable cavity (such as a hollow tree) for the swarm to move into.  For a fascinating exploration on how these scout bees find, report, and then debate the merits of multiple potential home sites, check out "Honey Bee Democracy" by Dr. Tom Seeley.

Bees in a swarm are not necessarily something to fear, but rather admired from a safe distance.  These bees have only landed to regroup temporarily, before moving on to a permanent home.  Since leaving their hive, they have no brood or food or nest to protect, and are usually quite docile if left undisturbed.  However, in cold, wet weather, their attitude may deteriorate, and they will become more defensive the longer they are homeless in the open.

When we have long periods of cool wet conditions, like this spring, the bee population is growing, and the hive is getting crowded, but the weather doesn't permit them to swarm.  Suddenly when we have a bright, sunny day, hives all over the area seem to swarm at once.  Sometimes there are multiple mature queens that have developed in the hive while they were waiting for that good weather.  Once the old queen leaves with her cohort of workers, one or more virgin queens will emerge with a smaller group of followers, known as an afterswarm.  Sometimes multiple afterswarms emerge at once, or over several days.  Below is a photo of three simultaneous swarms near one my hives this week. 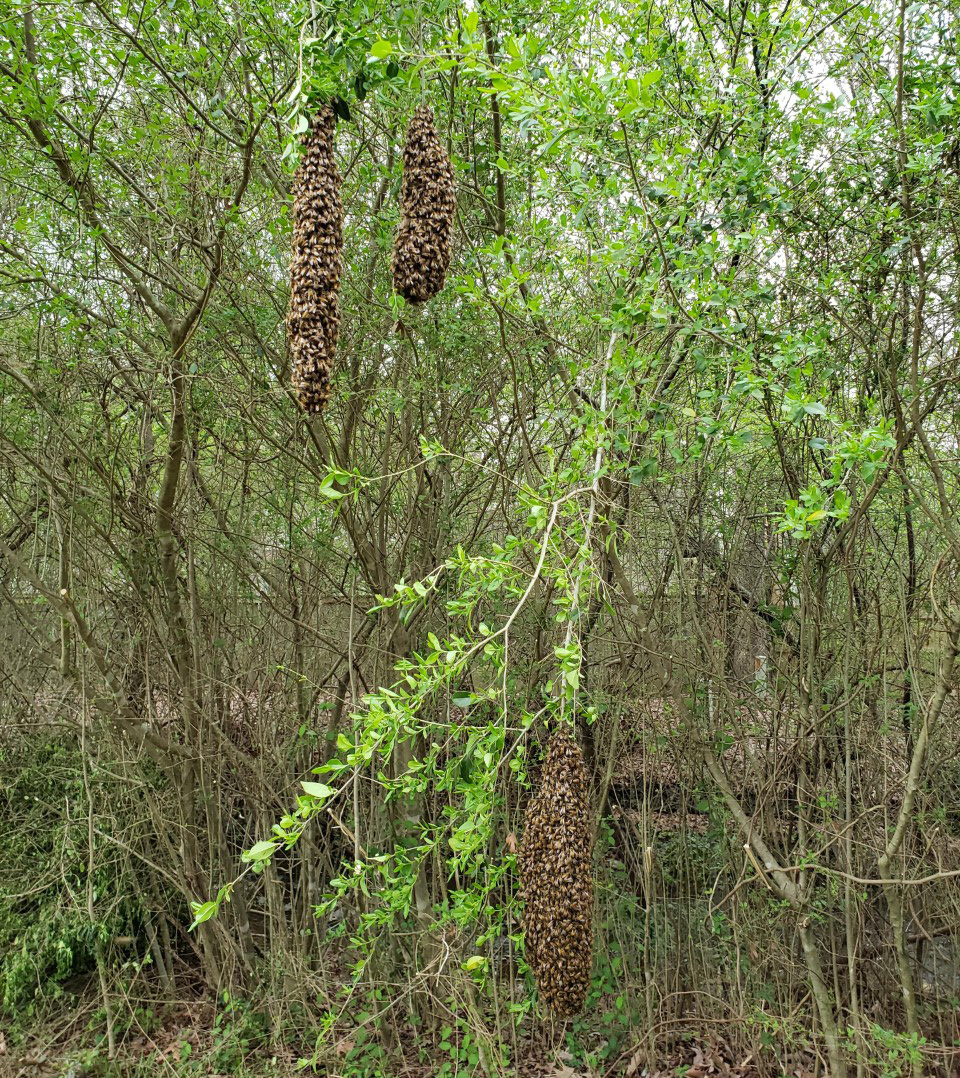 The larger swarm, lower down, was probably the main swarm with the mated queen.  The smaller ones above were likely afterswarms that left the hive at the same time.  Had these virgin queen stayed behind, they would have had to fight to the death with any others remaining, to determine who would inherit the hive.

Each of these swarms were easily collected.  I simply held the tree branch just above the swarm, and clipped it off the tree.  As long as they are handled gently these bees will stay put, and the whole swarm can be placed into it's own hive, tree branch and all, with some frames.  The frames with drawn comb will attract eh bees, and allow them to immediately store nectar and pollen, and the queen can lay eggs.  In a day or two, the branch can be removed, and extra frames can be added to fill in the spaces.  Hopefully each will grow quickly and become productive.  The virgin queens will fly off to mate over the next few days, and then return to begin their egg-laying careers.  If the queen begins producing brood, the rest of the colony is sure to stay.  Occasionally, however, a captured swarm still decides to leave, and the beekeeper returns to find the hive empty.

Swarming is a natural and normal process that keeps colonies at a manageable size for both bees and beekeepers, and ensures the survival of their species.  If you see a bee swarm, don't panic!  They are not out to get you.  Just leave them alone to do their thing.  Snap a photo to share with your friends, and call a beekeeper to come and relocate them to a place where they will be welcome.

If you don't know any beekeepers, contact your Extension honey bee specialist at 501-671-2222, or your local County Extension office.  The Arkansas Beekeepers Association also have a public list on their website to help you locate a beekeeper near you that can take care of the swarm.

If you can't contact a beekeeper, you still don't need to panic and don't try to kill them.  They will likely move away peacefully in a few hours to a few days, as soon as they find a suitable home.