We have had an unseasonably warm spring so far, here in central Arkansas.  Many flowers are blooming, and the bees are buzzing, taking advantage of good flying weather and abundant food.  As they are able to collect more pollen, they will be feeding their queen more royal jelly.  Her improved diet will help her to produce more eggs.  The additional larvae will require feeding as well, so the workers will be gathering as much pollen as they can.  This cycle of population build-up is the bees' response to food availability.  They are already preparing to gather as much food as they can to survive next winter!  They are also thinking about reproduction.

Honey bee swarms are the method by which a colony reproduces.  Each spring a healthy colony builds up and is likely to begin producing new queen cells.  When the new queens are nearing maturity, the old experienced queen will leave the hive.  She will usually take anywhere from 50-65% of the workers with here.  They will settle nearby on a tree limb or other convenient location, and will scout the area for a hollow tree or other suitable nesting site.  Meanwhile, back in the hive, a new queen will emerge from her cell.  She will immediately try to kill any rival queens before they can emerge.  After a few days, she will embark on her nuptial flights, and will then take over at the colony matriarch, laying eggs and producing pheromones. 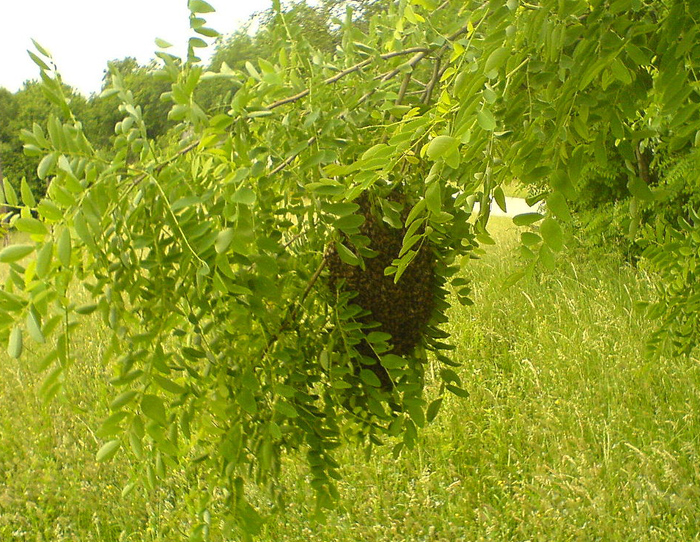 Once the scouts find a suitable cavity, the whole swarm of bees will take to the wing and move into their new home.  Their first job will be to construct new wax honey combs so that their queen can begin producing new brood, and so that the workers can begin storing pollen and nectar.  They must be able to store up sufficient honey during the spring to last them the rest of the year.

Swarm season has already begun in central Arkansas!  The first call form a concerned homeowner was received in late February.  With the nice weather and abundant flowers, we expect to get plenty more.  If you see a swarm of bees, don't be alarmed and frightened.  Rather, rejoice that the bees are healthy and strong enough to swarm.  Report the swarm to your local Cooperative Extension Office, or to the UA apiculture office at 501-671-2222.  We maintain a list of beekeepers in most counties that are willing to retrieve swarms of bees and put them into hives.

You can also find a beekeeper in your area by contactacting your local beekeeping club.  If you are a beekeeper who would like to have your name added to our list, please submit your contact information.