The USDA National Agricultural Statistics Service recently released its annual report on honey production.  This year's report was delayed for several months due to the recent government shut-down, but is finally available to view online at https://usda.library.cornell.edu/concern/publications/hd76s004z.

This annual survey counts the total number of bee colonies and annual honey production for operations with five or more colonies.  Hobbyists with few colonies are not included in the national survey, which breaks down that information for each state.  This year's report also updates the data for Arkansas production in 2017, which was published incorrectly last year due to reporting errors.

Last year's report originally stated that Arkansas' 29,000 bee colonies produced 2.2 million pounds of honey, for an average of 77 pounds harvested per colony.  Although widely reported and discussed, this erroneous 35% increase from 2016 production levels was surprising for some of our state's honey producers, who had not experienced such a significant rise in colony productivity.  Due to reporting errors, some honey produced in other states was accidentally attributed to Arkansas production in the 2017 report.  This year's report corrects these figures and shows that Arkansas bees actually produced 1.9 million pounds of honey in 2017, with an average colony yield of 68 pounds per hive - a discrepancy of more than 260,000 pounds.

Turning o the most recent data, the numbers for 2018 don't look great either.  These latest figures report that Arkansas beekeepers maintained 28,000 colonies in 2018, but only harvested an average of 50 pounds per hive, for a total of 1.4 million pounds of honey produced in the state.  Using the revised 2018 data, Arkansas experienced a 29% reduction in overall productivity from previous year.  This makes 2018's average colony yield the lowest in three decades. 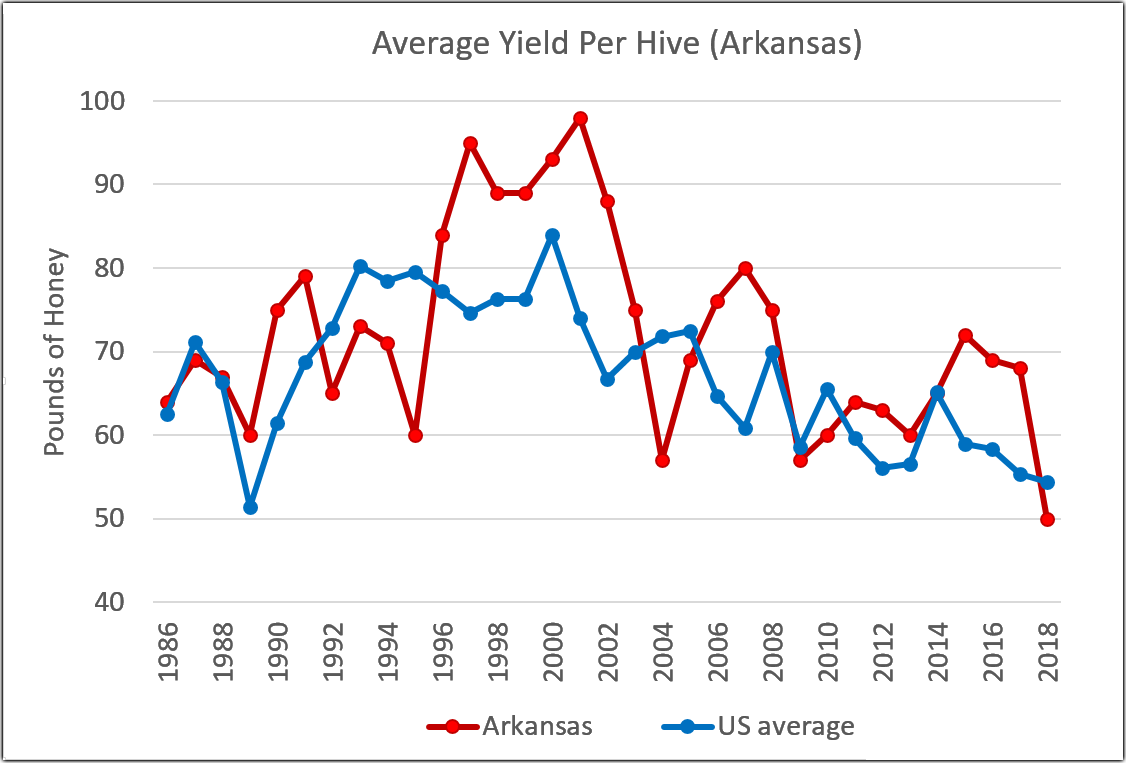 Honey production goes up and down each year, due to many external factors.  Weather is a big one, which influences both the abundance of wildflowers, and how well nectar-producing crops will grow.  Lower production in the late 80's and early 90's may be attributed to the arrival of two devastating honey bee parasites, the tracheal mite and the varroa mite.  This was followed by several good years, when these mites were control.  In 2004, boll weevil eradication in eastern Arkansas was blamed for severe losses and low productivity.  Through the 2000's, resistance to traditional mite control techniques became more common, and a number of factors that became collectively known as CCD began to affect beekeepers nationwide, including here in Arkansas.  Meanwhile, changes in farming and land management throughout the state have also affected the honey that bees can produce.  For instance, economic factors have caused corn acreage to increase over the last 15 years, replacing some nectar-producing crop acreage with wind-pollinated cereal grain that does not produce nectar.  Increased herbicide use on farms has also reduced the amount of pollen and nectar available to bees from wildflowers and flowering weeds in the rural landscape.

One Arkansas beekeeper was not at all surprised by the recently reported low figures on honey.  In 2016, Richard Coy, co-owner of Coy's Honey Farm, began seeing significantly reduced honey production in some areas that historically did very well.  He suspected herbicide damage to nearby wild plants was affecting the bees.  Without access to sufficient pollen in the spring, honey bee colonies will not grow their populations, and will not have a large workforce when there is abundant nectar for them to collect and turn to honey.  Also, this flowering vegetation is a vital food source for the bees when crop plants are not in bloom.

The areas where Coy first saw problems with his bees were the same parts of the state that reported high numbers of complaints about the herbicide dicamba.  As dicamba use increased during the 2017 and 2018 seasons, the Coy family continued to witness decreased production across a wider area.  Citing this drastic decrease in available forage for their bees, the Coys announced earlier this year that their family would be relocating their operation, and moving about 12,000 of their bee hives our of the Arkansas delta, and into Mississippi where their family's queen bee breeding operation is based.  This exodus will significantly reduce the number of honey bee colonies in Arkansas to the lowest in many years, and will potential have both economic as well as ecological effects for our state with the absence of all those pollinators and the honey they produced.

The Coy Honey Farm, based near Jonesboro, began humbly enough in 1969, when Bobby Coy purchased of a single bee hive from Sears, to place in his back yard.  Over the years, he and his sons Stephen, Richard and David, with help from spouses and grandchildren, grew their operation to become the largest in Arkansas, often producing well over a million pounds of honey annually.  Bobby Coy received the 2001 Excellence in Agriculture Award from the Greater Jonesboro Area Chamber of Commerce.  The Coys were also named Craighead County Farm Family of the Year in 2003 by the Arkansas Farm Bureau.  The loss of their operation in Arkansas will mean that over 40% of our state's honey bee colonies will moving away with them.  Many of us in the beekeeping industry have known and respected the Coy family, and we will miss them.