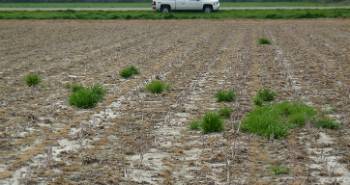 Ryegrass clumps in an Arkansas field.

The New Year is here and with it comes new hope that this growing season will be much better than 2019.  This year we have already started in somewhat better shape (at least prior to the upcoming monsoon) with a much higher percentage of fields that are ready to plant.   With the warmer temperatures it is easy to see winter vegetation taking over in many fields, especially in the southern part of the state.  Several calls have come in for burndown programs to stay ahead of these winter weeds and hopefully get an early start on the season.  Keep in mind herbicides are not very effective in cold (below freezing) temperatures.  Daily high temperatures the day of application and 3-4 days following application should be in the mid to upper 50’s with lows not falling below freezing for best activity. Through numerous conversations it seems we may have 2 predominant scenarios this spring for winter weed burndown and field prep.

The first scenario includes fields that were harvested early and either worked in the fall, or left for no-till, that are in pretty good shape.  I really don’t like to start talking burndown programs until February but if temperatures warm, some fields will be haired over by then.  If you are planning on making a January / February burndown application on these fields that are ready to plant, include a residual in the tank with glyphosate and 2,4-D.  Residual herbicides last longer in our colder months of January, February and March, and may hold winter weeds back until the first of April.  Several options exist (see 2020 MP44) depending on crop that is to be planted on the acre.  Flumioxazin (Valor1.5-2.0 oz/A) is a great choice for this application timing because it is fairly economical, will provide residual control of most of our troublesome winter annuals and any crop can be planted in 30 days.  If planting to corn or STS/Bolt soybean, Leadoff (1-1.5 oz/A) is an economical option and may add increased control of glyphosate-resistant ryegrass if you’re lucky (some populations are resistant). The down side to using these residuals early is bed erosion on ground that is already hipped up, so weigh all options before making that decision.

The second scenario involves some function of tillage that will be required before the crop can be planted.  Depending on the tillage to be done, most if not all fields should be sprayed with a high rate of glyphosate (40oz/A Roundup Powermax equivalent) prior to working the ground. Many learned the hard way last year when fields were re-grown with winter weeds 3 days following the Kelly tool or other tillage practice. This can cause issues because bluegrass and other weeds will form large root balls that will create problems when floating or pulling beds.

Rainfall plays a big role in how effective tillage is at killing weeds with any implement, generally the drier the better for several days following tillage allows the roots to dry down and die.  Rainfall following tillage or too much moisture and the winter weeds will take root and be tougher to control the next time.  You may ask why such a high rate of glyphosate?  Glyphosate alone is hit or miss with a lot of our winter weeds, but in the last 3-4 years we have seen reduced control of bluegrass (Poa annua) in some areas.  No doubt cold temperatures, rainfall, cloudy days, poor application, and water quality issues play a role in success or failure, but generally a higher rate can overcome many of these issues.  Broadleaves are in general easier to control with tillage, but can still slip through so if broadleaves are large, add 2,4-D to the tank.  The idea is to keep it as cheap as possible, especially if you plan to till.

Glyphosate-resistant Italian ryegrass is another key reason to start thinking about a timely burndown.  Earlier application timing is better with this weed in most scenarios. I have been surprised in the number of cases where rimsulfuron (Leadoff) has controlled ryegrass effectively because there are many populations of ryegrass in Arkansas resistant to the ALS chemistry.  If Leadoff is not an option, or hasn’t worked in the past, clethodim (Select Max 16oz) or paraquat (Gramoxone 40oz) are the only other options for control.  The bigger the ryegrass, the more applications it will take to kill it. The problem with Select this time of year is that it is very slow, even when temperatures climb to 50o F.

Regardless of which scenario you are in, early (January/February) burndown applications or tillage usually results in a second application prior to planting if residuals are not used. Every scenario is different, so match the herbicide program to the situation. New versions of the MP44 are hot off the press, so be sure to pick one up at your local county extension agent office.

Wishing all a safe and prosperous 2020!