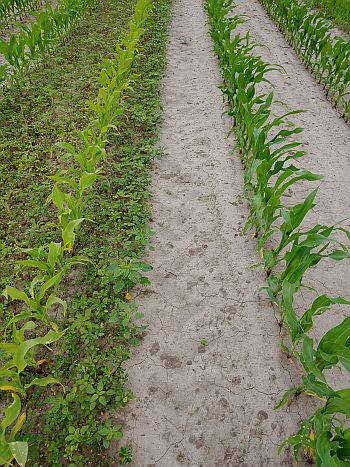 Weed control in Arkansas corn production has become more and more difficult over the last several years with the onset of glyphosate-resistant pigweed, marestail, and ryegrass.  Each of these weeds if not controlled prior to planting can rob corn of yield potential. To make matters worse, pigweed populations have been found resistant to 6 herbicide modes of action in at least one Northeast Arkansas County.  The most recently widespread of these is pigweed resistance to PPO herbicides such as Flexstar, Sharpen, and Valor. Fortunately for corn producers, there are several herbicide alternatives to control glyphosate and PPO-resistant pigweed in corn.  However, what is more alarming are the populations that have been found resistant to POST applications of HPPD (Callisto, Capreno) herbicides and on a lesser scale resistance to metolachlor and acetochlor PRE.  Metolachlor resistance is not as widespread and may be limited to Crittenden county.  For more info see Metolachlor Resistance: What are the facts?

Corn yield can be lost due to weed competition the first 6-8 weeks after planting depending on growing conditions.  It is easy for us weed guys to focus only on pigweed control, but many other weeds, especially grasses can quickly cause early season yield loss if residuals are not used at planting.  Atrazine and Dual II Magnum have been, and still are key players in corn because they provide cheap, effective broad-spectrum weed control.  Knowing the specifics about pigweed populations from one field to the next is crucial for any successful herbicide program. You may be certain that HPPD and metolachlor resistance is not present on your farm but, it is a good management practice to change things up this year and use a different herbicide mixture because as we all know, pigweed populations can spread quickly through many methods.

We have conducted numerous herbicide studies on 6-way resistant pigweed in Marion and Crawfordsville, AR the last four years.  Herbicides containing pyroxasulfone (Anthem Maxx, Zidua, etc.) and dimethenamid (Outlook) have provided much better residual control with these pigweed populations than Dual II Magnum (metolachlor) or Warrant (acetochlor).  These are all Group 15 herbicides but because of the difference in herbicide metabolism in resistant pigweed populations, Anthem Maxx /Zidua and Outlook have consistently worked better from a residual standpoint.

HPPD-resistant pigweed populations are resistant to POST HPPD applications but can still be controlled from PRE or from residual HPPD activity.  Additionally, our research indicates that adding atrazine to any HPPD herbicide provides improved control over atrazine or the HPPD herbicide alone, including control of HPPD-resistant populations.  What does all this mean?  If growing corn in Northeast Arkansas, I would strongly consider a two-pass program starting with Zidua or Outlook up front at a minimum and following with a diverse postemergence application including the maximum allowable rate of atrazine (2 qts/acre).  Atrazine continues to be very effective on even the 6-way resistant pigweed populations.  Another approach would be to use an aggressive mixture at planting such as Acuron or Verdict plus atrazine and follow with a POST that includes the remaining atrazine and whichever HPPD you like (see MP44).  The only downside to these robust PRE’s is plantback to other crops if the corn stand is failed.  Glufosinate (Liberty etc.) is an option on LL hybrids and when mixed with atrazine can add value to controlling a healthy pigweed population.  It is a good idea to diversify and use a robust corn herbicide program regardless of where you farm to further delay local weed resistant issues. Everyone stay safe and call or message your local county extension agent with any questions.