Over the last couple weeks I have had several conversations with consultants and growers about pigweed control. Many are concerned with the levels of postemergence control they are seeing in all technologies, but especially with glufosinate or Liberty.  I have received several pictures of pigweed escapes following two or three Liberty applications in Northeast Arkansas.  We all know that Liberty is a finicky herbicide anyway and optimum control depends on several key factors including; weed size, rate, nozzle selection, GPA and time of application just to name a few.  However, in these particular cases, control failures could not be linked to any specific application parameter.  In past years, a second, or third application would clean up the survivors but this approach has not worked well for some fields in 2020.

I visited several of these fields over a week ago, and my first thought was “this looks like 2007”.  Patches of pigweed that survived were scattered across the field and looked as if they originated from 1-2 female plants the year before.  Very consistent and classic examples with what we see in fields with initial resistant pigweed populations.  I soaked several of these patches down with a 2% Liberty solution and the results, even on smaller pigweed, do not look promising.  We have not done the adequate testing on these fields or populations to officially call them resistant but based on my observations, control with Liberty in these fields is at the very least, slipping.  We will be collecting seed and soil to do further testing.  My colleague on campus, Dr. Jason Norsworthy has also observed reduced activity with glufosinate (Liberty) in the greenhouse on a population collected recently from one northeast Arkansas county.  His results further indicate that additional populations collected are also showing signs of increased tolerance to dicamba and 2,4-D.  So far, it appears that if a pigweed population displays increased tolerance to dicamba, it also shows increased tolerance to 2,4-D. 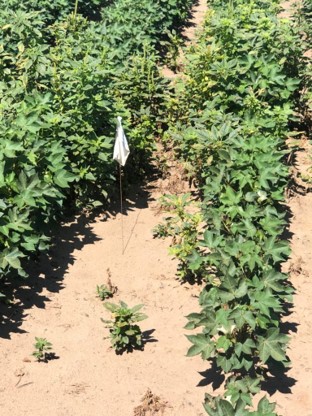 Don’t get me wrong, many fields in the area appear clean and weed control programs appeared to work well.  What these few problem fields are showing us, is the potential future issues we are likely to have.  This should not be a big surprise because we have relied solely on PPO chemistry or glufosinate (Liberty) for postemergence pigweed control since 2010.  Five years later we identified PPO resistance, and shortly after resistance to metolachlor (group 15).  After walking fields last week and visiting with Larry Steckel this week, it is evident that we are about to run out of chemical options for pigweed control in the north delta region. Growers should take all precautions necessary in suspect fields to remove these populations prior to seed production.

My counterpart, Dr. Larry Steckel has observed, increased tolerance in pigweed populations to applications of dicamba and 2,4-D across the river in Tennessee but has not observed any issues with Liberty yet.  I have not walked any fields in Arkansas where growers or consultants were complaining about the activity from dicamba, probably due mostly to the May 25th cutoff.  However, when I evaluate my cotton and soybean weed control plots at Marianna I have noticed that 22oz Xtendimax in Xtend or 32oz of Enlist One in Enlist are not controlling the populations of pigweed as well as they have in the past.  Two applications of either of these products generally controls most pigweed plants in my plots, but many times some survive. Likewise 2 applications of 32oz/A Liberty is required on small pigweed to have equal control.  These observations have been fairly consistent across trial location and replications.

I have also walked several fields sprayed with Enlist Duo or Enlist One, where some pigweed populations would curl up, crawl across the ground but not die, some even after 2 applications.  Granted, in most of these cases pigweed was bigger than 6 inches before initial application.  However, fields where growers tankmixed both Enlist One and Liberty had excellent pigweed control.  This has also been verified in my weed control plots regardless of location.  Anywhere I tankmixed Enlist One and Liberty resulted in excellent pigweed control after the initial application.  Moving forward we must make timely application to small pigweed and use multiple herbicide modes of action POST if we hope to mitigate further resistance development.

The short term solution many would say, is a later dicamba cutoff window for Arkansas.  It is true that growers who have not relied solely on dicamba the last 2-3 years would have another available tool to manage mid-season pigweed, but for how long?  Tennessee is already witnessing, at a minimum, a low-level resistance with dicamba after the third full year of use in cotton and soybean.  We also know through recent history that later dicamba applications will likely find the non-dicamba tolerant soybeans or other sensitive species in the area.  How will it be possible to rotate technologies when crops that are not tolerant are so sensitive?  The best technology currently available from strictly a pigweed control standpoint appears to be the Enlist system because it allows the legal tankmixture of both Enlist One and glufosinate (Liberty) postemergence.  However, this technology only resides in one brand of cotton and only a handful of branded soybean cultivars which presents a problem from a supply and diversity standpoint.  Although Enlist may be less volatile than dicamba formulations we know that non-tolerant cotton is very sensitive and will likely show injury if Enlist is sprayed on a large scale in the area.  The quick answer is to stack every crop with all technology available, but there is no evidence of this happening anytime soon, at least with cotton and soybean.

The future postemergence chemical control of pigweed in cotton and soybean, especially in Northeast Arkansas, is looking bleak at best.  Crop rotation to corn or rice is a sound practice but many fields are limited in rotation based on soil type and water capacity. We are coming to a breaking point where a multi-faceted approach to weed management will be required moving forward.  Deep tillage, cover crops, narrow row spacing and harvest weed seed control are examples of cultural practices that many growers will be forced to use in the very near future to reduce pigweed numbers and relieve some pressure off of residual and postemergence herbicides.    We have said it many times the last couple of years, but the next breakthrough in long-term pigweed management will not come solely from a jug, but through an integrated approach.