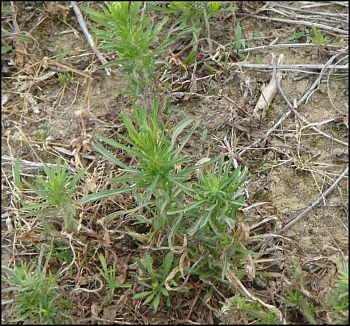 Many calls coming in on marestail (horseweed) control this week such as: “What can I spray and plant immediately,” or “It’s up with my crop, now what”?

The majority of horseweed in Arkansas is resistant to glyphosate and has been since 2006. It is allelopathic to most crops grown in Arkansas and if left uncontrolled the first 8 weeks can cause significant yield losses. Large horseweed is very difficult to control. If the field is covered from one end to the other with >8 inch horseweed, it will likely be cheaper to run the disk and delay planting than to blow the budget for 60% control and fight it all year long. Most of these calls and pictures indicate that the horseweed we are dealing with is 4-6 inches tall.

In Corn: If not emerged, 10 oz/A of Verdict with either Roundup or Gramoxone is a good option. It works better in front of corn than soybeans or cotton, because of the increased rate of Verdict allowed, and no plantback restrictions to Verdict in corn. If corn is up, it becomes a little more difficult. This is generally the time where I would recommend adding 0.25 lb ai/A approved dicamba (equivalent to 11 oz/A Xtendimax) to the POST mixture of atrazine plus Capreno, Halex GT etc. Due to the current dicamba restrictions in Arkansas, this application becomes more difficult to recommend. However, applications of an approved dicamba formulation such as Xtendimax can be made if all labeled tankmixing rules are followed. Keep in mind that glyphosate is no longer a labeled tankmix partner for any dicamba formulation after April 15th in Arkansas.

Standard corn programs such as Halex GT plus 1.5-2 qrts/A of Atrazine will provide decent control of emerged horseweed that is 4 inches tall or less. Adding Liberty (glufosinate) to the POST mix is another option and will improve control, but make sure that the corn hybrid planted is Liberty Link before making the application.

Resicore, a mixture of acetochlor, mesotrione, and clopyralid, is a newer alternative that has a good fit for horseweed in corn that’s less than 12 inches tall. The suggested rate based on our experience is 40 oz/A, make sure you read the label because there are planback restrictions, including a 12-month plantback interval to cotton.

The final option in corn is to add 16 oz/A 2,4-D to your favorite POST herbicide mixture, but the ability to use this herbicide is dependent on where you farm in the state. Be sure to read and follow all State Plant Board rules prior to making applications of an approved dicamba or 2,4-D formulation.

In Cotton: Prior to May 25th, an approved dicamba formulation (Engenia, Xtendimax, etc.) can be applied any time prior-to, or at-planting, or POST in Xtend cotton as long as Arkansas State Plant Board and Federal Label rules are followed. Since other species may be present prior to cotton emergence, Gramoxone plus one of the PSII inhibitors such as Caparol, Cotoran, or Diuron is most likely the best option on small horseweed with these cooler temperatures. Liberty will become a better option after emergence or once daily highs move up in the 80’s. When the cotton reaches 5 true leaves, Envoke can be used. Envoke has really good activity on horseweed but cotton injury can be more severe if sprayed prior to the 5-leaf stage.

As always be sure to reference the herbicide product labels prior to making applications and the MP44 for further suggested herbicide alternatives. Wishing everyone a safe and healthy planting season, call us with questions.