In Arkansas, grain sorghum does not typically field-dry to a safe moisture content (MC) to avoid quality losses (12% wet basis).  Therefore, it must typically undergo artificial drying to achieve the target MC for safe storage. Grain sorghum has its highest quality at harvest and subsequent post-harvest handling and processing must be carefully planned and managed to avoid a decrease in quality and market value, and provide Arkansas producers with a measure of control over the quality and market value of their grain sorghum.

A sling psychrometer is one of the tools used for measuring relative humidity, and is relatively inexpensive. A sling psychrometer works by measuring the air temperature with a wet and dry bulb thermometer, and then using a table to determine relative humidity. EMC of drying air also affects the rate that the grain sorghum is dried. The difference between the EMC of the air and the actual MC of the grain is proportional to the drying rate. Therefore, wet grain sorghum at 18% MC from the prior example exposed to 60 °F, 70% RH air with an EMC of 14.1% will dry more slowly than if the grain sorghum was exposed to 70 °F, 50% RH air with an EMC of 11.4%. Accordingly, grain sorghum may be dried without adding any heat to the drying air if the EMC is sufficiently low compared to grain moisture content.

Careful monitoring of the EMC of the drying air and management of air flow rates and drying operations is necessary to take advantage of weather periods when EMC is low will provide the most economical drying. In many cases, particularly at night and during high humidity weather patterns, the addition of heat is needed to lower the EMC of the drying air. To determine the value of EMC in your area now, click the link Determination of the current temperature and relative humidity based on your zip code.

Table 1: EMC of grain sorghum in equilibrium with air at various temperatures and relative humidity levels

To determine the values of EMC for various grains, download the Excel sheet by clicking the link: "Equilibrium Moisture Content"

One way to cause the grain to reach equilibrium with the air sooner and therefore dry faster is to increase the flow rate of air over the grain. For most typical in-bin grain drying systems, drying time is cut in half if the airflow rate is doubled.

To select and maintain your fan, please see the fact sheet titled "Selection, Performance and Maintenance of Grain Bin Fans"

Natural air-drying and low temperature drying typically occur in bins with one or more fans attached to the bin. The fans may also be attached to a heater for low temperature drying. Natural air-drying does not utilize a heater. Natural air or slightly heated air (<10°F) is forced up through the grain with fans for a sufficient time to reduce grain moisture content to safe storage levels. This is typically done in bins with a perforated floor to ensure even airflow, but can also be done using air ducts laid on the bin floor prior to adding grain. Grain sorghum offers higher resistance to airflow than corn or soybeans. Thus, bin-drying methods used for other grains can be adapted to grain sorghum if some adjustments are made to compensate for the high resistance to airflow. The simplest way is to reduce grain sorghum depth in the bin to half that is used for corn or soybean. In addition, the installation of centrifugal fans may help to deliver higher airflow rates under higher static pressures.

Bin capacity, as measured in bushels of grain, increases by increasing the bin diameter and/or the grain depth as shown in Table 4. A grain bin with 28 ft diameter and 16 ft height can hold up to 7,882 bushels of grain sorghum. Increasing the grain depth increases the static pressure that the fan must overcome to provide the required airflow rate. See Figure 6 for a graphical representation of the relationship between fan size, airflow rate, and static pressure requirement.

The following is an illustrative example of how to use the information presented to this point for estimating the fan requirements for drying grain sorghum. A 30-foot diameter bin is filled to a depth of 8 feet with grain sorghum at a moisture content of 18% wet basis that must be dried. Table 2 recommends a minimum airflow rate of 3 cfm/bu for 18% MC grain sorghum. Table 5 shows that the capacity of the bin at this depth is 4,524 bushels. Therefore, the total airflow rate required from the fans in cfm is 3 cfm/bu * 4,524 bu = 13,572 cfm. Table 4 shows that the static pressure requirement for 8 ft. depth at 3 cfm/bu = 5.11 in water. Figure 5 shows that 1-15 hp fan will provide about 15,000 cfm to the grain sorghum, which exceeds the 3 cfm/bu (13,572 cfm) requirement. Therefore, 1-15 hp fan will provide the proper airflow required to dry grain sorghum with an initial moisture content of 18% wb in the 30 ft. bin filled to a depth of 8 ft. It should be mentioned that for a 30-ft or 32-ft bin, grain sorghum depths greater than 20 feet would generally reduce airflow rates to less than 1 cfm /bu even with the use of 3-15 fans. Accordingly, Table 6 could be used to simplify the selection of grain depth as a function of grain sorghum MC and fan size.

If high moisture grain sorghum is to be dried and stored in the same bin, extra care is advised. Stirring devices, re-circulators, or automatic unloading augers can be used to increase the drying rate. For high moisture content grain sorghum, it is recommended that after drying grain sorghum to 17%, use unheated air to dry it to about 15%. During this period, run the fan continuously to maintain uniform moisture content. Once the grain sorghum has dried to 15%, run the fans only during low humidity hours to finish drying to around 13%. This management scheme will minimize the amount of grain sorghum overdrying in the bottom of the bin. Never use air heated above recommended temperatures as this can cause severe overdrying resulting not only in wasted energy that is uncompensated at the elevator buying point, but also damage quality of the grain sorghum. 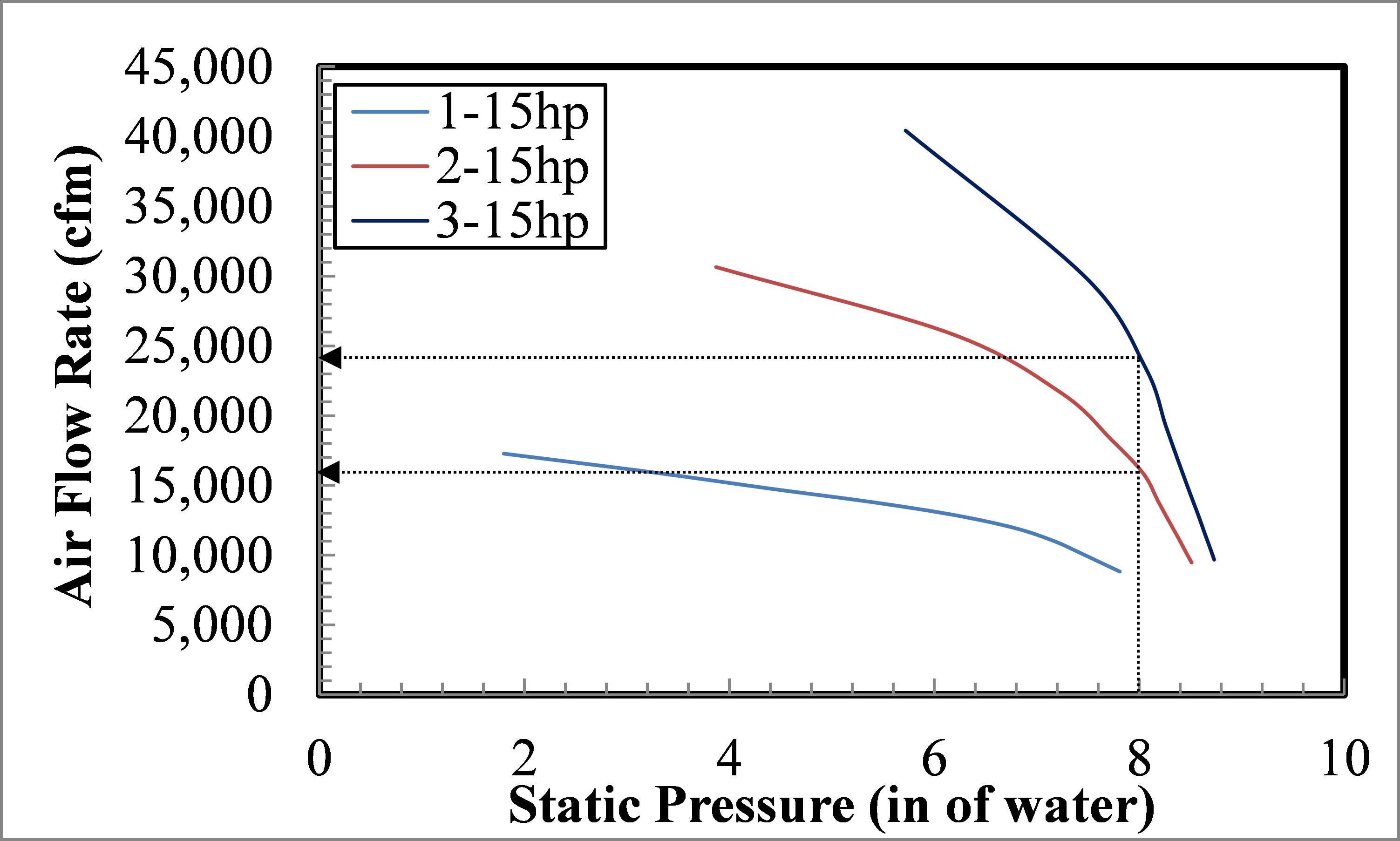 High temperature batch or continuous flow dryers are usually used to dry large capacities of grain sorghum. These units typically have very high airflow rates, and they do not require supplemental heat for daytime drying when harvesting grain sorghum at 18-20% moisture range. If heat is used, the drying air temperature can be limited by cycling the burner on and off or by changing the gas burner orifice size using an automatic modulating valve. 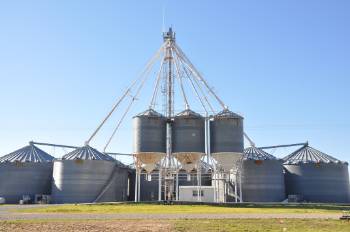 Pass or continuous flow dryers are often utilized to speed up the drying process. These high flow driers pass very large amounts of high temperature air over the grain sorghum. Three to six moisture percentage points may be removed from the grain in a single pass. The grain exiting these types of dryers must be cooled to near ambient temperature prior to storage or transport. Continuous flow drying helps to rapidly prepare grain for shipment to market if needed. Quickly drying the grain down to values of 16% or less will lessen potential spread of toxins for affected grain.

Grain sorghum growers who use on-farm grain sorghum drying and storage list numerous advantages of these technologies. On-farm drying and storage costs may be less than the drying price reduction at a commercial dryer, particularly if some other crop may justify the capital cost of their on-farm equipment. For comparison to reductions at a commercial dryer, on-farm energy costs for electricity and liquid propane range from 3 to 4 cents per bushel per point of moisture removed. In addition, on-farm drying may make it economically feasible to harvest grain sorghum early, at moisture content higher than the dockage level at a commercial dryer. This provides the grower with more flexibility for managing their business. Additionally, early harvest and proper drying can produce better quality grain sorghum compared to grain sorghum that is re-wetted in the field several times while field drying to a dockage level.

Following are some tips that may help grain sorghum producers achieve better grain quality while minimizing the drying cost:

Never add more heat than necessary to adjust the humidity of the drying air below 55%. The maximum heat needed, even in rain or 100% humidity will be about 15-17oF above the outdoor temperature. Adding too much heat can over-dry the bottom layers of grain to as low as 8% and that reduce the market weight. Recommendations for heated air temperature rise are to: add 15 degrees F if the outside air humidity ranges between 85 to 100%; add 10 degrees F for 75 to 85% humidity and 5 degrees F for 55 to 75% humidity. If the humidity is 55% or less, use natural air for drying.

It is essential to maintain the on-farm grain sorghum drying cost at a minimum in order to maximize the return on investment. To estimate drying costs for producers interested in drying their grain sorghum need to first determine the total pounds of water they will remove from one bushel of grain. The number of BTUs to extract 1 pound of water will vary from 1,100 to 1,400 BTU/pound depending on how easily moisture is given up by the kernel. A good estimate is to use an average of 1,200 BTU/pound of water removed to calculate the energy needed to get rid of 1 pound of moisture. Table 7 summarizes the BTU/unit of fuel as well as the burning efficiencies. Burning efficiencies estimate the conversion of raw gas use to energy. Therefore, if one gallon of LP gas is consumed by the heater with a burning efficiency of 80%, then the amount of heat added to the air is 0.8*92,000 = 73,600 BTUs.

Table 7: Heating value of fuel as well as their corresponding efficiencies

Working with either moving and/or stationary grain requires special precautions and training. Therefore, it is necessary to keep in mind the following tips while working with grain sorghum as well as other grain: