What are the origins of squash? 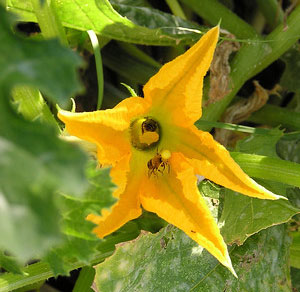 Squash is gourd fruit belonging to the genus Cucurbita. Other edible members of this family include cucumbers, melons, pumpkins and gourds. Evidence suggests that they are definitely of American origin. Squash has never been found in a wild state and has been important in primitive agriculture for centuries.

The earliest cucurbits – probably originating in Mesoamerica – were considerably smaller. Squash and pumpkin cultivation date back 9,000 years, judging by scattered remains of seeds and stems found in prehistoric caves in the Tamaulipas mountains of Mexico.

Most popular among squashes today is the zucchini, which became popular in American gardens in the 1950s. It has been reintroduced to this continent from Italy. Italians acquired the zucchini over 300 years ago and formed a liking for it. The name is a derivation of an Italian word meaning “sweetest.”

How does summer squash differ from winter squash?

Summer squash (also known as vegetable or Italian marrow) is a tender, warm­-season vegetable. It is grown throughout Arkansas during the frost­-free season. Summer squash differs from winter squash because it is harvested before the rind hardens and the fruit matures. It grows on bush­-type plants that do not spread like the plants of winter squash and pumpkin. A few plants will produce abundant yields. 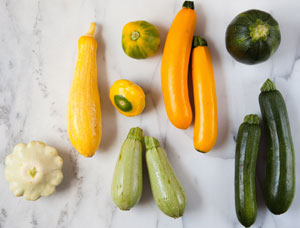 The three main types include:

The main difference between summer and winter squash is summer squash is eaten when it is immature and the rind is tender.

When should I plant squash in Arkansas?

Warm soil is necessary for germination of seed and proper growth of plants. Plant seed directly in the garden after the danger of frost has passed and the soil has warmed above 62 degrees F in the spring.

This is generally after April 1 in southern Arkansas, April 10­-15 in central Arkansas, and April 21-­30 in northern Arkansas and at higher elevations. With ample soil moisture, summer squash thrives in warm summer weather. A second planting for fall harvest may be made in mid-­July to mid­-August.

Grow transplants in a greenhouse for early harvest. Plant seed in deep containers two to three weeks before the desired planting date. Transplant about three weeks later after danger of frost. Older plants that have hardened and stopped growing will not transplant well and should be discarded. Squash is a warm-­season plant and does not do well until soil and air temperatures are above 62 degrees F.

How should I prepare the soil for planting?

Squash grows best in a loamy, well­-drained soil. Adjust soil pH as indicated in a soil test. Soil should have pH 6.0 to 7.5. If the soil test recommends raising the soil pH, apply agricultural limestone two to four months prior to planting the garden.

We offer free soil testing for Arkansans. Learn how to get your soil tested!

Spacing and Depth of Planting

For single plant production, sow two to three seeds 24 inches apart or three to four seeds in hills 48 inches apart. Cover 1 inch deep. When the plants are 2 to 3 inches high, thin to one vigorous plant or no more than two plants per hill.

How do I produced the best yield? Should I fertilize squash plants?

Any well­-drained garden soil produces excellent yields of summer squash. Squash plants are shallow-­rooted and require ample soil moisture at all stages of growth. For best yields, incorporate compost or well­-rotted manure before planting. Fertilize the garden by broadcasting 2 pounds of 10­-10­-10 fertilizer per 100 square feet of garden and incorporate into the soil. If transplants are used, apply a transplant fertilizer starter at the time of planting. Mix one
tablespoon of a soluble fertilizer high in phosphorus (i.e., 10-­20­-10) into a gallon of water, and apply one cup of solution per plant.

After harvesting for three or four weeks, side­dress with additional fertilizer; 1 pound of a complete fertilizer per 100 square feet is adequate. This is about 1 or 2 tablespoons of fertilizer per plant. Squash responds to mulching with soil­-warming plastics in early spring or organic materials in summer.

Squash bears male and female flowers on the same plant. Male flowers are formed first, then the female flowers. Female flowers are characterized by an undeveloped fruit at the base. Pollination is not always necessary for most summer squash, since it is harvested at bloom or shortly afterward. Pollen will be transferred from male flowers to female flowers by bees. Use insecticides late in the afternoon or in the evening to prevent killing bees.

What's wrong with my squash plant?

The most common problems include:

Do not handle, harvest or work in the leaves and vines when they are wet to avoid spreading diseases.

Spotted and striped cucumber beetles attack seedlings soon after emergence from the soil. In certain years, they may attack squash in large numbers and stunt or kill small plants. Overwintering beetles carry bacterial wilt disease and spread it to plants when they feed. Control cucumber beetles by applying a suggested insecticide.

Squash bugs can be a problem on older plants. They can cause considerable damage to foliage and may even strip the plant of leaves. These insects are easy to control when in the nymph stage. As they reach the adult stage, squash bugs are nearly impossible to control.

Squash vine borers are clear­-winged moths that lay eggs near the base of squash vines. When the larvae enter a stem, little can be done. Chemical control is possible only if an insecticide is present when young larvae hatch from the egg prior to entering the plant

Watch for buildup of colonies of aphids on the underside of the leaves. Use a suggested insecticide if colonies appear.

When should I harvest?

To get the best quality summer squash, harvest when small and tender. 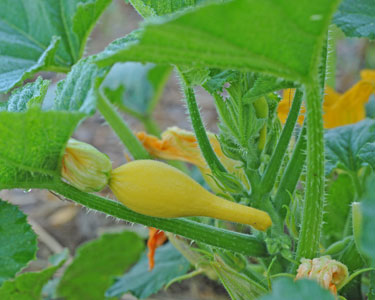 Harvest when immature only (days to maturity – 50 to 65). If the rind is too hard to be marked by the thumbnail, it is too old. Do not allow summer squash to become large, hard and seedy.

Remove over-sized squash and discard to maintain the yield potential of the plants. Squash grows rapidly and is usually ready to pick within two to four days after flowering.

Although summer squash has both male and female flowers, only the female flowers produce fruit. Since the fruit is immature when harvested, it bruises easily. Handle with care and use immediately after picking. Some gardeners also pick the open blossoms before the fruit develops. These blossoms are a delicacy when dipped in batter and fried.

What's the best way to store and prepare my harvest?

There are many ways to enjoy squash. It can be cooked, eaten raw, or even preserved as pickles and relishes.

Yes. Squash can be transplanted when the plants are young (15 to 20 days old) and have been started in containers. Large vine crops do not transplant well. Many gardeners place two seeds in a 3­-to 4-­inch deep pot in late March and early April to start a few squash plants for spring harvest

Your problem is probably squash vine borer, and if it is, the white, grub­-like larvae can be found within the stem of the plant by cutting it open. The larvae hatch from eggs laid by bright­-colored, wasp­-like moths on the foliage or stems. The eggs hatch, and the larvae travel down the plant to the stem and literally “core it out.” To prevent this problem, begin control measures about the time the plants start to bloom by applying an insecticide to the base of the plant.

Once grubs are inside the stem, they are almost impossible to control. During the fall growing season, begin treatment shortly after plant emergence.

No. Vine borers cannot be controlled effectively with insecticides once they have infested the plants. Dispose of the infested plants to reduce potential damage in following seasons. Apply insecticide before vines are infested.

Squash plants produce male and female flowers. For fruit to set, pollen must be transferred from the male to the female flower by pollinating insects, mostly bees. When treating the garden for insects and diseases, spray or dust during the
late afternoon to avoid killing bees. Nematode infestations can also cause this problem, so check roots for galls.

Good yellow summer squash should be 1 1/2 to 2 inches in diameter at the base and pale yellow in color. If overripe fruit is not removed, the plant will stop yielding.

Yes, but this is not a recommended practice. Squash has male and female blooms and needs bees for pollination. Seeds saved from this year’s crop probably will not breed true when planted next year. This is especially true if more than one
type of squash variety or a hybrid squash, such as Dixie, is grown.

This is Chaonephora fruit rot or blossom blight, a soilborne disease. It rots young fruits and is damaging to them during extended wet periods.

It can be controlled with a combination of treatments to reduce the humidity around the plant, such as using raised beds and open foliage. This allows air movement to dry the soil and the foliage. Avoid planting squash on heavy, poorly
drained soils.

This information came from our Home Gardening Series Squash Gardening