How Can Breakfast Improve Your Health? 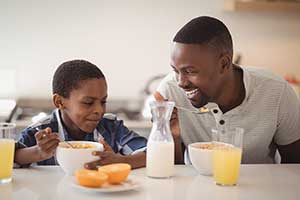 Eat breakfast yourself. “Showing” teaches more than simply “telling.”  Children are more likely to follow what an adult does. Studies show that children who eat breakfast learn better. It also gets your metabolism going and helps with concentration.

Some people skip breakfast due to lack of time, lack of appetite, or both. But what effects does skipping breakfast, often called the "most important meal of the day" have on your health?

Many kids aren't hungry first thing in the morning but it's a mistake for them to skip breakfast. Studies have shown a relationship between skipping breakfast and body fat in children. If your kid can eat healthy foods at breakfast including protein (eggs, cheese, peanut butter) they will feel fuller longer which will lead to benefits such as:

A 2015 University of Arkansas study showed that providing school-­aged children increased protein at breakfast decreases hunger and increases fullness for several hours after breakfast compared to a carbohydrate­-based breakfast low in protein.

Making breakfast a priority doesn’t have to take up a large portion of the morning.

Here are some quick and easy breakfast ideas from EatRight.org to send kids out the door feeling full and ready for the day.

Skipping breakfast in adulthood has been strongly associated with overeating, weight gain and obesity.