The Keto Diet - what is it? | Facts about the keto diet
skip to main content
Eating Well

The keto diet - what is it?

Fast Facts about the keto diet 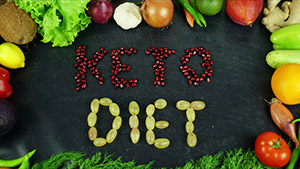 Little is known on whether or not long-term adherence is safe or if the diet is safe for everyone in the short term, especially those with pre-existing health conditions.

Why was the keto diet developed?

The ketogenic diet premiered in the medical setting in 1921 by Dr. Russel Wilder. The diet was originally intended to treat children diagnosed with epilepsy. The anti-seizure effects were first noticed in response to fasting. However, the ketogenic diet was crafted to support growth and development in children without long periods of not eating.

What are macronutrients and why are they important?

Recently the ketogenic diet (also known as the keto diet) has risen to fame as a fad diet that claims to treat obesity. Calories in food come from three different sources: fats, carbohydrates and proteins. These three sources are called macronutrients.

For someone consuming 2,000 calories a day, they would only be allowed to consume 20-25 grams of carbohydrates. Eating carbs at such low levels requires staying away from foods such as rice, pasta, bread, fruit and potatoes. However, you can eat foods high in dietary fat such as meats, nuts, cheese, avocados and eggs. 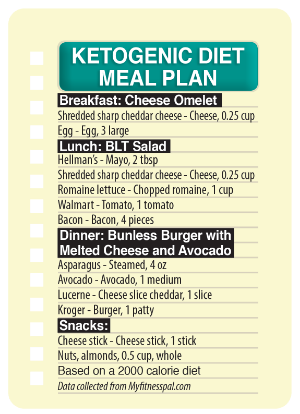 How does the keto diet work?

Avoiding eating carbohydrates and increasing the amount of dietary fats you eat for a long period of time (1-2 weeks) causes your body to change its metabolism and enter a condition called ketosis. Ketosis mimics the effects of prolonged fasting and starvation.

Changing how the body fuels: from glucose to ketones

We use fuel (e.g., the calories we eat) in a way that can be compared to hybrid cars. If one fuel source is used up, the backup fuel source will kick in. Normally our brains rely heavily on a steady supply of glucose (carbs) for fuel. When we eat more carbohydrates than we need, our body stores them for later use. Stored glucose is packed tightly into molecules called glycogen which can be used to maintain our body in case we go too long without eating a meal.

These reserves can only last about one day; and once depleted, the body must switch to a different fuel source called ketones.

Ketones are produced in the liver. In response to low levels of glucose, the body begins breaking down fat tissue for fuel in the form of free fatty acids. Free fatty acids can be used as a fuel source throughout the body except for in the brain. 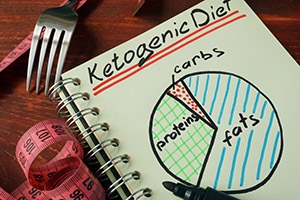 The chart above indicates that the keto diet requires eating macronutrients at a ratio of 60% fat, 30-35% protein and 5-10% carbs.

This causes the brain to hit the metabolic panic button in demand for a source of fuel. In response, the liver begins to repackage fatty acids into ketones, which are allowed access into the brain for fuel. The ketogenic diet makes your body think it is in a state of ketosis, making you burn fat for fuel instead of carbohydrates or protein.

What does the research say?

In an analysis of 13 randomized controlled human trials, researchers concluded that the ketogenic diet caused the following changes to participants:

Concerns about the keto diet

The short-term weight loss effects of the ketogenic diet seem promising, but very little information is known on whether or not these effects continue during long-term compliance. In fact, one of the major concerns regarding the diet is its long-term feasibility. Strict dieting regimens that lead to short-term weight loss can eventually lead to increased weight gain once dieters stop following the diet.

How safe is the keto diet?

As mentioned earlier, the majority of calories in a ketogenic diet originate from fat. This causes many to fear the risks of developing heart complications due to increased consumption of saturated fats and cholesterol. Nevertheless a recent analysis reviewing more than 20 published trials reported there is no significant evidence that consumption of saturated fat increases the risk of heart complications.