Look to protein breakfasts to make a dent in child obesity

FAYETTEVILLE, Ark. – People are told repeatedly to eat breakfast, the most important meal of the day. But to make a difference against child obesity, not just any breakfast will do. A protein-based meal makes it more likely that kids – especially overweight ones – will burn more calories than those who eat a carbohydrate-based breakfast.

“Consuming breakfast is linked with health. Breakfast skipping is associated with unhealthy eating habits because data show that those who skip breakfast in the morning tend to make unhealthier food choices and consume more calories later in the day,” said Jamie Baum, an assistant professor of nutrition at the University of Arkansas System Division of Agriculture food science department. 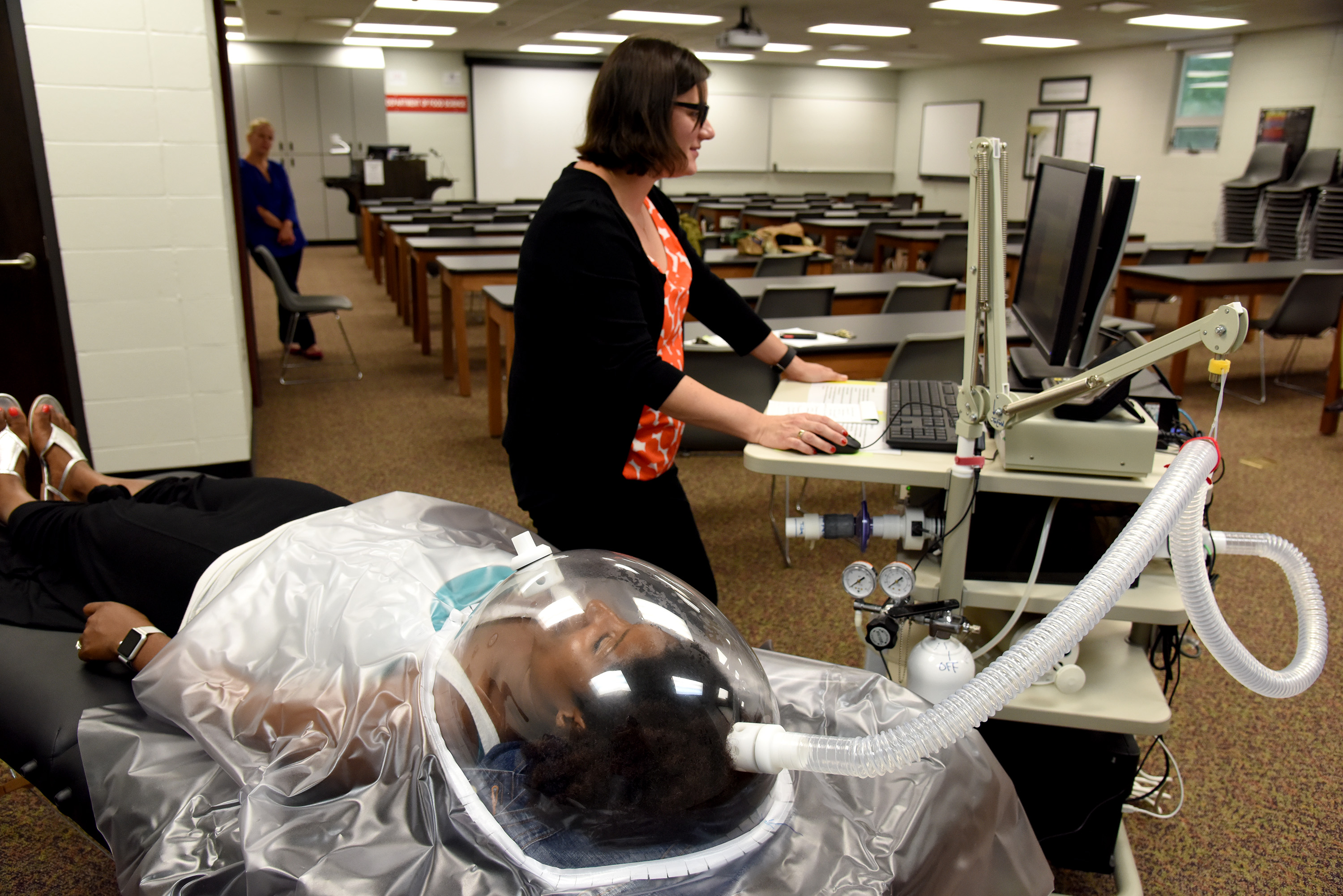 Jamie Baum of the Division of Agriculture food science faculty operates the metabolic cart that’s hooked up to a graduate student. The machine measures the amount of oxygen that someone is consuming versus the amount of carbon dioxide being breathed out. Baum used it to measure how many calories children burned after consuming either a protein-based or carbohydrate-based breakfast.   (Photo by Dave Edmark.) Credit mandatory.

Baum’s study examined 29 children ages 8 to 12. Sixteen of them were normal weight and 13 were overweight. They visited a facility early one morning and were assigned one of two breakfasts to eat: one was a protein-based meal of one egg, two egg whites, orange juice, two slices of white break and butter; the other was a carbohydrate-based meal of one frozen waffle, butter, maple syrup and orange juice.

“Then we did a series of tests over four hours looking at their blood glucose as well as their energy metabolism and appetite response – how hungry did they feel after this breakfast,” Baum explained.

Their energy metabolism was measured on a machine while the kids lay flat on tables under a clear dome-shaped hood as they watched television programs or movies – no action movies or shows were allowed because they might excite the kids enough to throw off the results.

“The machine, called a metabolic cart, measures gas exchange: the amount of oxygen that they’re consuming versus the amount of carbon dioxide that they’re breathing out,” Baum said. “The machine does some calculations and can tell you how many calories your body is using as well as how many grams of fat or carbohydrates your body is breaking down.”

The data were collected from each child six times during the four hours. Then the kids were treated to a lunch buffet with 20 items available, some classified as healthy and some unhealthy, as the staff recorded how much and what they ate. That ended their experiment for the day. One week later, they repeated the process but were served an opposite breakfast than what they had during the first visit.

“We also found that regardless of body weight, kids consuming the higher protein breakfast stayed full longer, had less hunger and less desire to eat or consume a snack,” she said.

The results showed that the increased energy expenditure demonstrated by the kids who had the protein-based breakfast could contribute to increased energy expenditure and reducing obesity in overweight children. A longer-term study is planned for a project funded by the Arkansas Biosciences Institute that will examine the same groups of children by giving them a beverage to measure their energy metabolism over a longer time period, Baum said.

The breakfast centered on egg and egg whites in this study was just one example of a protein-based meal that is beneficial. Baum offered other examples of ways to put some variety into the mix.

“You can add a piece of ham or turkey bacon to increase protein levels,” she said. “With kids you can put ham on toast with an egg to make a breakfast sandwich. Or you can add a piece of low-fat cheese, a good source of protein. Greek yogurt and low-fat yogurt are also good sources of protein. If you’re thinking outside the box and you’re making a breakfast sandwich you can always add chicken or turkey and low-fat cheese to your egg and toast.”