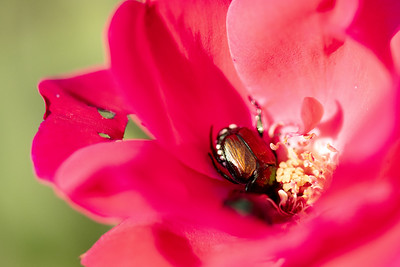 Roses are one of the preferred hosts of the adult, so it's important to scout often.

What are Japanese Beetles? 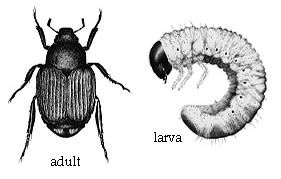 The Japanese beetle, Popillia japonica, is a scarab beetle. Beetles are insects that have a complete life cycle, i.e., they have eggs, larvae, pupae and adult stages. The Japanese beetle larva or grub stage (pictured) and the adult stage are the stages that cause problems for homeowners.

The adult Japanese beetle, Popillia japonica Newman, is about 3/8-inch long. It is metallic green in color with copper colored wing coverings. The beetle has five small white tufts under the wing covers on each side and one more pair projecting from the tip of the abdomen which distinguish it from similar beetle species. 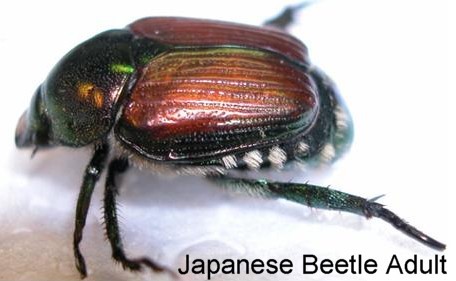 When Japanese beetles emerge and mate, the females will lay eggs in the ground. The eggs hatch after about 2 weeks and spend the next 10 months developing as white grubs, the larval stage of Japanese beetles. White grubs feed on grass roots and may become a problem in managed turf areas.

Where did they come from?

Originally from Asia, Japanese beetles were brought over to the United States in 1917 into New Jersey. It is believed they arrived in Arkansas in the late 1990s, from nursery stock that was infested with the grub stage. It was first detected in Arkansas in 1997.

What types of plants do they feed on? 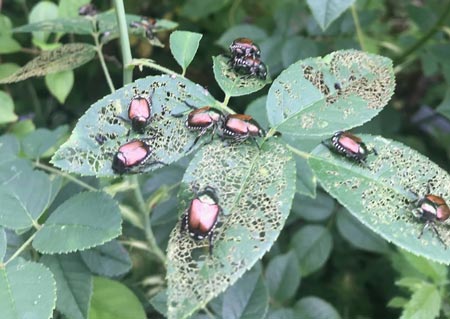 Japanese beetle adults utilize a wide variety of plants as food sources and have been known to feed on more than 400 plant species but only about 50 species are preferred. From the carefully manicured roses in your garden to the poison ivy you've been trying to clear out, they have quite a varied appetite. Rose enthusiasts should note that roses are a preferred host of the adult. The white or yellow-flowered cultivars are somewhat more attractive and susceptible than ones with darker flowers, but generally Japanese beetle will feed on all rose cultivars.

To minimize their presence in your yard it's recommended to plant trees and shrubs that are NOT preferred hosts of the adult Japanese beetle.

View some examples of preferred and non-preferred host plants.

Adults are very mobile, and can invade new areas rapidly and can re-infest plantings that were treated successfully several days earlier.  Their tendency to cluster together often results in clumps of severely damaged fruit or leaves near other completely undamaged portions of the same plant.

Why do Japanese Beetles cluster together?

Japanese beetle feeding produces odors which act as pheromones to attract other Japanese beetles to the area to feed and mate. Plant odors attract both sexes to potential food sites. Pheromones are chemical odors used by insects to communicate.

How do I get rid of Japanese Beetles?

Controlling Japanese beetle adults depends on the magnitude of the problem. Small numbers of beetles can be removed by hand; simply shake the plant early in the morning when the beetles are least active and collect them in a bucket of soapy water. If the problem persists or the concentration of beetles becomes too high, other methods of control may be necessary.

Should I use baited traps?

One method that has become popular in recent years uses baited traps that attract the beetles. However, this has proven to be more effective in large-scale area-wide situations; one or two traps in an individual garden may attract more beetles than they control.

I have an infestation. What kind of insecticide should I use?

When an infestation is apparent, the use of an insecticide labeled for Japanese beetles will provide control and provide some protection for your plants. There are several insecticides that can be used to help control damage by adult Japanese beetles (see table below). These individual insecticides vary in how long they can persist and control beetles, what plants they can be used on, whether they move systemically in the plant, and in their hazard to desirable insects like pollinators.

If Japanese beetles are damaging flowering plants, the potential for hazard to pollinators, is very important in determining what type of insecticide to choose. Insecticides that are highly toxic to bees and have long residual activity are hazardous to pollinating insects that visit the flowers. These include products with the active ingredients carbaryl, bifenthrin, beta-cyfluthrin, gamma-cyhalothrin, permethrin, and imidacloprid. These insecticides normally have label instructions to prohibit their use when there are flowers in bloom that are attractive to bees.

Some insecticides, listed in the Table above are less toxic to bees or persist for only a short period of time, and can be used on plants that are in flower if applications are made during times of the day (early morning, dusk) when bees are not active and visiting plants. Examples include pyrethrins, azadirachtin, and acetamiprid. One insecticide product, chlorantraniliprole (Acelepryn), does not have restrictions for use on plants in bloom because it has very little, if any, toxicity to bees. However, this product is not marketed for homeowner use and is only marketed for commercial/agricultural uses.

Download the Japanese beetle factsheet for a printable insecticide chart

All chemical information provided is given with the understanding that no endorsement of named products is intended, nor is criticism implied of similar products that are not mentioned. Individuals who use pesticides are responsible for ensuring that the intended use complies with current regulations and conforms to the product label. Before purchasing or using any pesticide, always read and carefully follow the label directions.