Plant of the Week: Japanese Beetle on Grapes 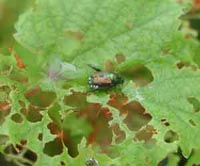 I call these weekly chats "Plant of the Week." This week, I need a scapegoat plant because I want to talk about a bug - the Japanese beetle. Japanese beetles are well established in northwest Arkansas and Little Rock, so if they haven’t yet appeared in your garden, be assured they are on the way.

I selected grape to carry the discussion of this pest for no particular reason because Japanese beetles lack a discerning pallet and seem to be equally fond of rose of sharon, hibiscus, roses, most vegetables and a host of garden flowers. Experts say they feast on over 200 species of plants.

Japanese beetles must have the perfect life - all they do is eat and have sex. They are like the familiar June beetle but a tad and marked with a bit of metallic green on the head region. On their posterior they have five tufts of white hairs on each side. They emerge from late June until early August.

The invasion of Japanese beetles appears to have started in a New Jersey nursery shortly before WW I when infested soil was used to ship Japanese irises. A quarantine and eradication program established in 1917.

But the beetles are good fliers and quickly spread beyond the limits of the quarantine. By 1924, some 2,500 square miles were infested.

The feeding damage of the adults is impressively disgusting, but in reality the grub form is more serious. Grubs attack fine feeder roots of grass and cause irregular patches of lawn to die in the heat of summer.

Female Japanese beetles live for about six weeks and every day lay from four to six eggs in the area where they are feeding. They have a fondness for well-watered lawns, and it’s not uncommon to have 10 or more grubs per square foot.

Most likely we will have a rough five or ten years in our gardens as the beetle invades the virgin territory of Arkansas, but eventually, naturally-occurring counter measures will begin to take hold and the population will stabilize at an annoying but tolerable level.

Managing the grub population is the first place to start. Insecticidal sprays applied to lawns and flower beds in the fall and/or spring give immediate control but must be reapplied annually. Spraying for grubs is only warranted if there is evidence of an established population in your yard.

Check with your local Cooperative Extension office for recommended chemicals if you choose this method.

Sevin is the most common insecticide for the adults and is relatively safe and effective. Trapping is more controversial. Just like bug zappers attract more bugs to your yard, Japanese beetle traps attract more beetles to your yard. If the yard is isolated this might be effective for control, but in a suburban setting your yard may look like the site of a teen-age party when the parents are away for the weekend.