Hornets in Arkansas | What hornets can be found in Arkansas?
skip to main content
Insect Pest Management 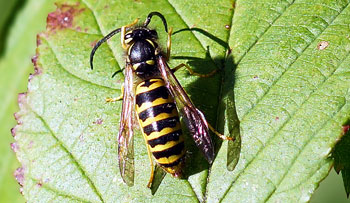 The Eastern Yellowjacket (pictured) is an Arkansas state regular, unlike the Asian Giant Hornet which has not yet been found in the state.

Though news of the Asian Giant Hornets has grabbed the nation's attention, Arkansas residents have little to worry about. Asian Giant Hornets, also known by their headline-grabbing name “Asian Giant Murder Hornets,” are properly known to scientists as Vespa mandarinia.

An Asian Giant hornet was found near Vancouver, British Columbia in Canada in late 2019. It was exterminated as an invasive species. Later in 2019, two more were collected near Blaine, Washington, near the Canadian border. Again, both specimens were exterminated. There have been several sightings since, including a nest that was successfully destroyed. Read more about how the nest was destroyed.

It is highly unlikely that Arkansas will see Asian Giant Hornets any time soon. There is practically no chance at all that wasps and hornets you may see in Arkansas annually are the invasive Asian Giant Hornets. They have been confirmed near busy Pacific ports where there is a lot of container shipment activity from Asia. The high mountain ranges and open plains separating Arkansas from the Pacific Northwest act as significant natural barriers to the Asian Giant Hornets migration as they reportedly prefer low hills and forest areas.

Hornets and other wasps are all ecologically beneficial by providing biological control of other pest species, and many are also plant pollinators. Also, all hornet species can sting, but generally avoid conflict with humans unless provoked.

A newly introduced species that has been confirmed by only a few sightings in Whatcom County, Washington. At up to two inches in length, and with wide, distinct stripes on their abdomen, Asian Giant Hornets are the world’s largest hornet species. These hornets usually nest on the ground. Currently, intensive monitoring and eradication efforts are in places to prevent their establishment. 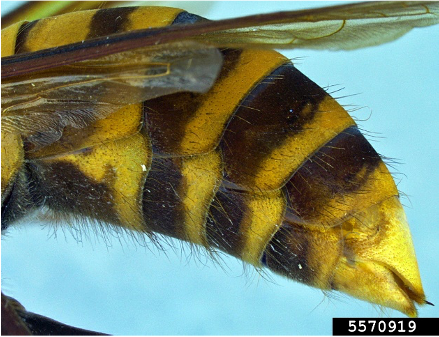 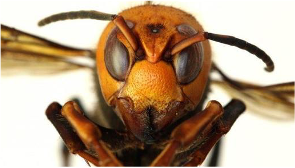 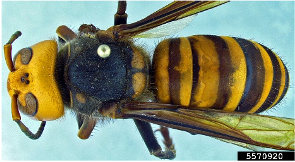 What hornets are commonly found in Arkansas?

European hornets are non-native and were introduced from Europe in the mid-1800s. They are widely established in the U.S. Queens can reach an inch and a half in length while workers reach about an inch in length. These queens may appear late to mid spring to establish new nests where she will stay while her workers forage for food. Their distinct but variable stripes are irregular in shape but symmetrical. European hornets usually construct paper nests in hollow trees or other dark, sheltered locations. European hornets are among the most common hornets mistaken for the Asian Giant Hornets. 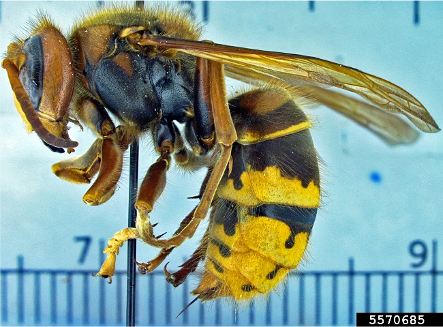 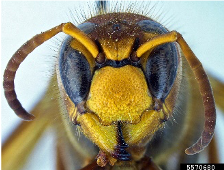 Cicada killer wasps are large native solitary wasp that can reach up to an inch and a half in length. They are often seen flying low to the ground, hunting for prey in grass during the summer and early fall. Females hunt large prey, such as cicadas, which they will bury in the ground for as food for their offspring.  Females can deliver a painful sting, but will do so only when provoked.  Males cannot sting, but will act aggressively territorial.  This species is the mostly likely to be misidentified as an Asian hornet in the summer months. 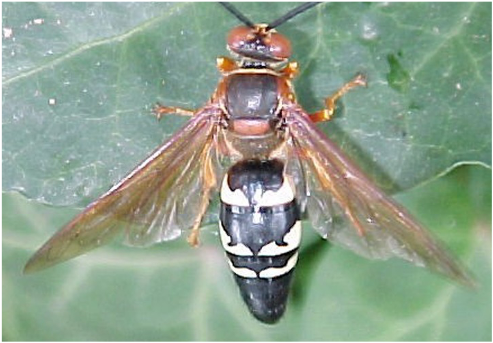 Baldfaced hornets are native to much of North America, but they are not actually a type of hornet but instead a type of large yellowjacket. Their black and white markings with white patch on the face give them their common name, baldfaced hornets. They build large, paper-like nests in trees, containing between 400 and 800 members. They will aggressively defend their nesting site from perceived invaders. 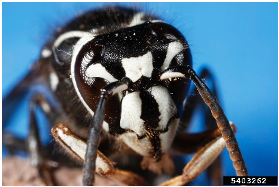 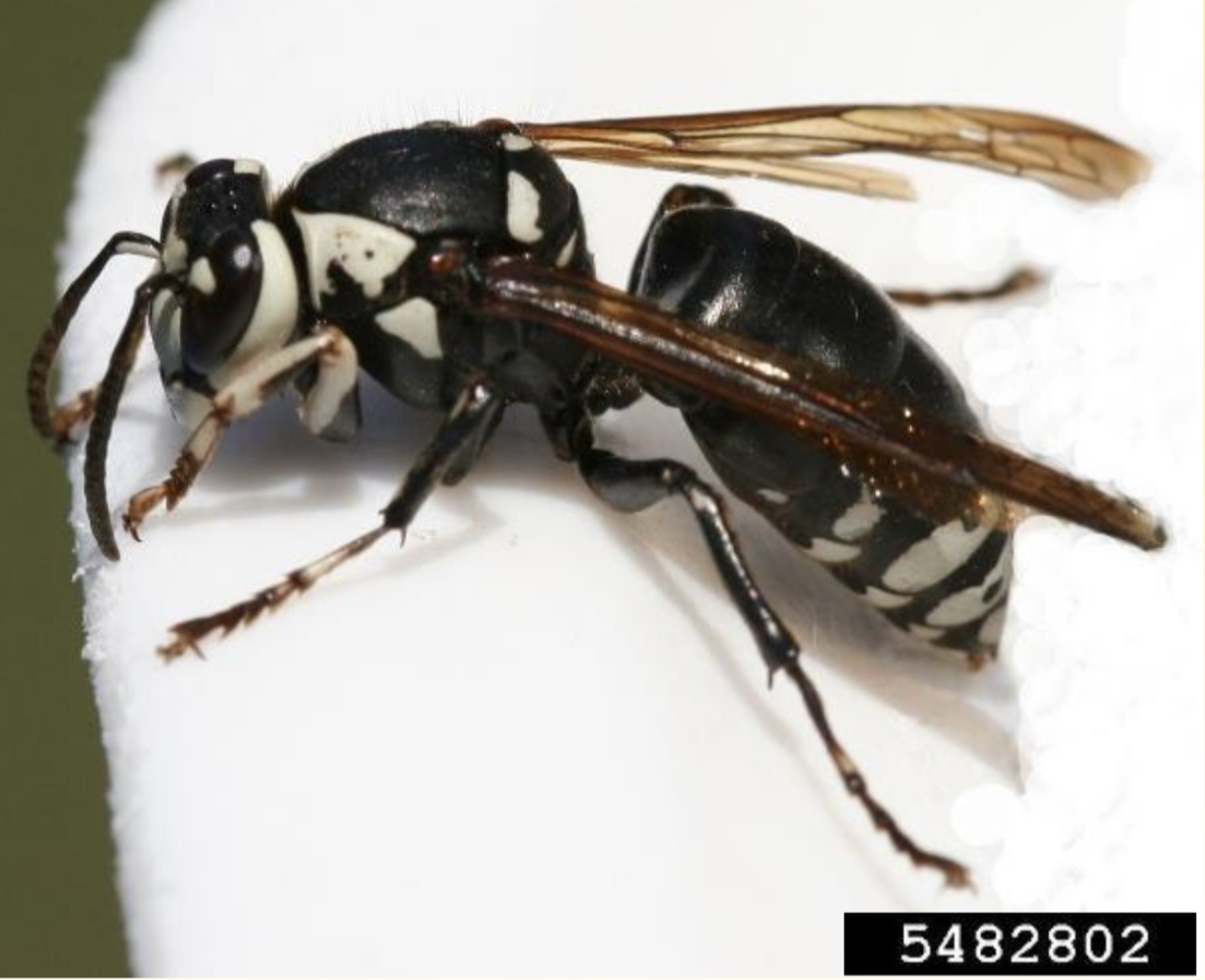 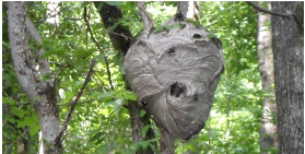 Relatively the size of a honeybee, Eastern yellowjackets are hairless and boldly striped. Their colonies consist of hundreds to thousands of individuals, usually underground and in other dark cavities. They may defend their nest site aggressively. Yellowjackets are often considered pests because of their attraction to sweet foods. 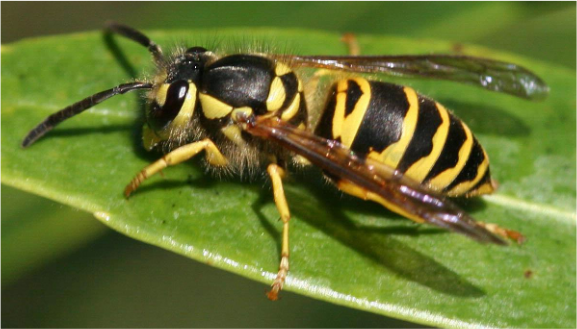 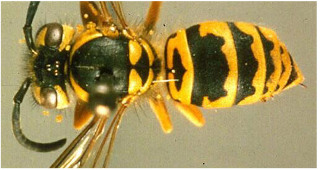 Thank you for your vigilance!  Eradication of any new invasive species requires quick action before it can spread and become established.  This requires dedicated cooperation between scientists, government agencies and observant citizens.  If you think you have killed or captured an Asian Giant Hornet, you can submit a specimen to your local county Cooperative Extension office for identification.

Please do not bring in live specimens!  Place it in a jar in the freezer overnight to preserve it.  While an actual specimen is best, sometimes good, clear close-up photos may be enough.  If you wish to submit a photo, include an object of known size in the picture for scale (a ruler is great, but a penny is exactly ¾” across and a quarter is just under 1” in diameter). Include photos from the top, bottom, sides and front, clearly showing the pattern of stripes for best identification.

Contact your local county Cooperative Extension office and talk to your county agent for more information.