Does your house seem to attract large numbers of lady beetles? If so, it may be the multicolored Asian lady beetle (MALB). The MALB is a native Asian species. This insect was first introduced into the U.S. in the early 1900s and after numerous subsequent releases, became permanently established across the country.

How are MALBs different from ladybugs? 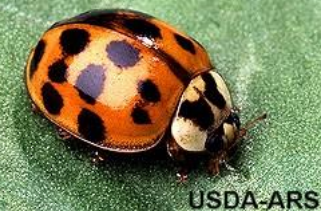 MALB adults differ from other lady beetle species by a pair of white, oval markings behind the head that form a black M-shaped pattern.

MALB adults differ from other lady beetle species by a pair of white, oval markings behind the head that form a black M-shaped pattern. Adults are approximately 1⁄4 inch in length, spherical or domelike, and yellowish orange to red. Most adults have 18 black spots on their forewings that vary in darkness. The spots may be missing or faint on some beetles. They will also bite humans (see below for behavior).

Unlike native species, MALB prefers protected overwintering sites in and around buildings.

Large hidden aggregations may hibernate in dark, secluded areas inside homes, such as attics and basements. They also may invade living areas of the home and on warm sunny days may be found flying toward windows.

What makes them undesirable?

When disturbed, MALB exudes a foul smelling yellow-orange liquid that can permanently stain walls, carpeting, drapes, and furniture. Do not swat or crush the MALB to reduce the likelihood of this defensive behavior.

Another unpleasant aspect of the MALB that differs from native lady beetle species is the fact that it will bite humans. These bites may cause welts that last 24 to 48 hours. In extreme cases of sensitivity, humans may have an allergic reaction to the fluid the beetles secrete, resulting in dermatitis and a stinging sensation. They do not damage structures or chew or bore holes in furniture. They do not lay eggs in homes. Find out more about what MALBs do and do not do in the link below.

What they do and don't do: myths and facts 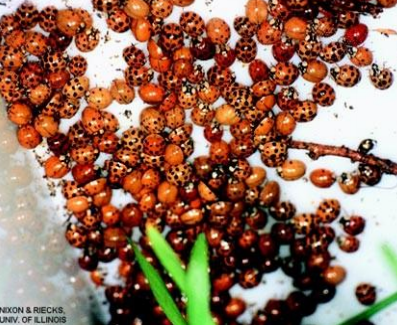 As shown in the photo above, MALBs can invade your property in droves.  If a swarm of MALBs has gained entrance into your dwelling, use a vacuum cleaner to collect them.

How can I prevent them in my house?

The best approach to managing an MALB problem is to prevent them from entering your home or building by sealing cracks and other points of entry before they begin to congregate in late summer and fall. If a swarm of MALBs has gained entrance into your dwelling, a vacuum cleaner may be used to collect the beetles. Be sure to remove the vacuum cleaner bag and dispose of it outside once you have finished collecting the beetles to prevent them from escaping.

I have an MALB infestation. What can I do?

You can trap or treat for MALBs by using our methods noted below.

1. Lady beetles that enter living areas are typically attracted to light. Trapping: Trapping Methods Commercial Black Light Trap – This trap is very effective in catching lady beetles that have entered the home. Operate the trap in a dark room or at night. Place in room most infested. Leave black light on all night. Empty the collection container often. IMPORTANT: Put cornstarch, talc or baby powder on the “wings” of the trap so that the beetles fall easily into bag. Commercially produced traps can be purchased from Southeastern Insectaries, Inc., http://southeasterninsectaries.com. Many other sources for black light insect traps can be found at websites related to entomological equipment and supplies. Home-made Light Trap – Assembly instructions for a home-made black light trap

2. Vacuuming is an effective method to remove live beetles from inside the house. This method will work with vacuum cleaners, shop vacs, and reverse cycle leaf or snow blowers. To avoid insects entering or damaging the vacuum, insert a knee-high nylon stocking into the end of the extension hose or wand to bag the insects. Be sure to secure the knee-high nylon stocking in place with a rubber band (see illustration below). As soon as the vacuum cleaner is turned off, be sure to remove the stocking so that the captured beetles cannot escape. As you remove it, the rubber band closes around the stocking, effectively capturing the lady beetles. You then can discard the contents of the stocking. If you want to keep the lady beetles and release them during the spring, place a damp cloth (they need moisture) inside the stocking. If you want to reuse the stocking, place the damp cloth inside a container perforated with numerous air holes and empty the lady beetles into the container. The collected beetles should be kept in a protected, unheated area, such as a detached garage or storage shed.

3. Pesticides - note that pesticides should be applied by the homeowner according to label instructions. There are professional pest control companies that have training to apply commercially available chemicals.

Interior Pesticide Application – Interior pesticide application is not recommended as dead beetles may accumulate within wall voids and this can lead to infestation by dermestid beetles which feed of the dead/decomposing MALBs.

For the same reason, DO NOT APPLY pesticides to the exterior of the structure in the spring when MALBs are trying to exit from their overwintering sites.

Also, exterior pesticide application in the spring may force overwintering MALBs to exit into the interior of the structure. Download MALB pesticide options