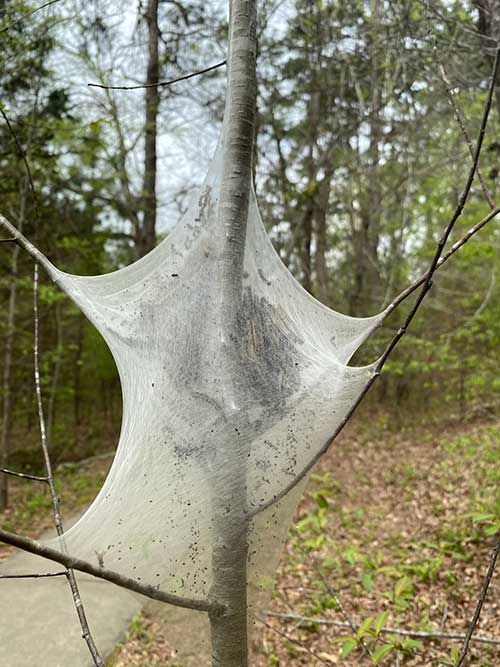 Caterpillar nests are commonly found on wild cherry, apple, and crabapple but may be found on hawthorn, maple, cherry, peach, pear, plum, and others as well.

They can defoliate and significantly stress young trees, but mature trees are rarely harmed and will regrow new leaves.

Tent caterpillar nests may appear unsightly to homeowners, especially when exposed by severe defoliation. And numerous caterpillars crawling over sidewalks, driveways, and on buildings may be considered a nuisance.

You can prune infested limbs to remove the silk tents. You can also treat trees with Bt (which is very specific to caterpillars but must be consumed on foliage, and it may harm other butterfly species). Treating nests with broad spectrum insecticides usually only works on caterpillars smaller than 1 inch in length.  Treating large surfaces such as walls is rarely effective.

These insects will mature in about six weeks, and the moths will simply fly away. They typically produce one generation per year. 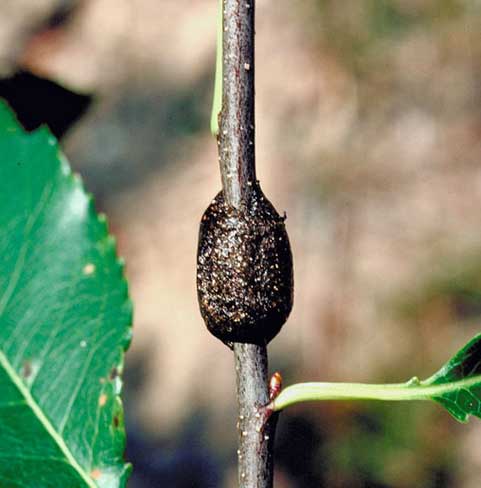 In the future, you can also prune away limbs with overwintering egg masses before they develop next spring to help limit their local population the following year.

Is it safe if a kid picks them up or a dog and/or cat eats them? Do birds eat them?

They are fairly safe for children to pick up and play with.  The caterpillars are more likely to be injured by children if squeezed or dropped.  Most birds will not eat them because they have unpalatable hairs on their body.  They are brightly colored with stripes and spots, not camouflaged.  If an insect is advertising its presence, it's usually not afraid of being eaten.  Most dogs/cats would probably find them distasteful.

Is it safe to eat plants that the caterpillars have been on? 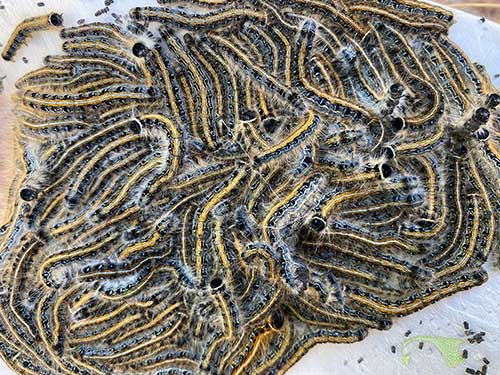 The caterpillars themselves don't leave any toxic residue on garden produce.  They appear early and will be gone before most vegetables are ready.  But you should wash any fresh produce before eating it.  Like many insects, they may have traveled across the ground, so there is no telling what they may have stepped in along the way.

Is there any real danger or damage they cause or more so just "an annoyance" or something people are curious about?

These caterpillars don't present any danger to us.  They just seem to appear suddenly in great numbers, and anything creepy-crawly in large numbers will make some people uncomfortable.  Just consider them native wildlife, which will be here for a short time, then gone again until next spring.

Get pesticide recommendations for tent caterpillars.

Before purchasing or using any pesticide, always read and carefully follow the label directions. 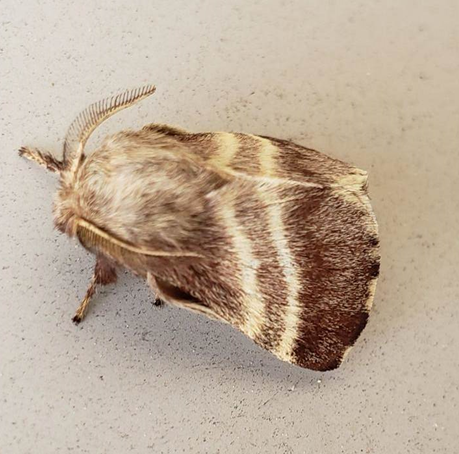 Do the adult moths harm plants?

The caterpillars turn into moths, which will only live about 5 days or so as adults.  Adult moths do not feed, and will not harm vegetation or animals.  The moths will mate, deposit eggs and then die. These egg masses remain on trees all year, and then hatch out next spring to begin the cycle again.