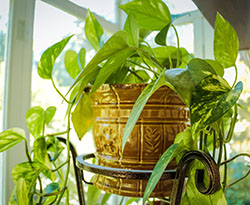 Houseplants are subject to a number of problems. Their care providers cause a surprising number of these difficulties. Before attempting to determine the cause of houseplant problems, consider the care the plant has received.

Check out the light and moisture guide for common houseplants.

Once any self-inflicted problems can be eliminated, then you can begin to look at other causes. Some of the most common questions about houseplants can be found below.

Why is my plant losing leaves suddenly?

This problem is most commonly associated with a sudden change of environment. Plants adapt slowly to various growing conditions. Sudden changes – for example, moving plants from the patio in the summer to the low light interior for winter – leave the plants unprepared to cope.

Sudden leaf drop (especially common on weeping fig) is a natural condition triggered by the changing light levels of the season. Most figs drop a few leaves in the spring as long days arrive and a lot of leaves in the fall when short days return. Under fertilizing and/or under watering will increase the amount of leaf drop. Also, check to make sure plants are not infested with spider mites because this pest sometimes causes this type of problem. See mites section below.

This problem usually indicates a low level of fertility. The plant is moving nutrients from the lowest (and oldest) leaves at the base of the plant to the growing points. Repot if needed and begin a fertilizer program.

Why does my plant have a marginal or tip leaf burn? 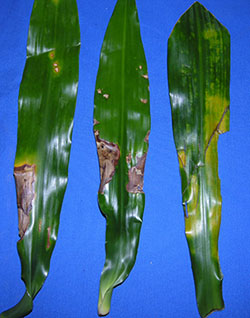 Over fertilization causes marginal or tip leaf burn on many plants, but that same symptom can also occur from under watering. A few plants, especially dracaenas and airplane plants, show tip burn on their leaves from high fluoride levels sometimes found in water or as a contaminant from potting soil. Some private wells have poor quality water (high salt, very hard water or water high in carbonates or bicarbonates). Continued use of this kind of water can lead to a slow, gradual buildup of salts in the soil. When salt levels get high enough, the plant is unable to take up sufficient water and produces smaller leaves and sometimes leaves with marginal burn.

Repotting with fresh potting soil is usually the best solution to the problem of burned leaves. Dracaenas with tip-burned leaves can be reshaped with scissors to make the leaves more attractive.

Why are the leaves small and off-color?

This is usually associated with poor nutrition, but the same symptom can be caused by over watering, which kills roots and causes symptoms of poor nutrition. If over watering is not the cause, begin a regular fertilizer program and stick with it. Usually, fertilizing with a liquid fertilizer solution on a monthly basis is adequate. Reduce feeding during the low-light days of wintertime.

Why is my plant not growing?

Remember that plants require time to adjust to a new environment, so don’t expect new plants to begin growth immediately in a new environment. The most common cause of poor growth is insufficient light.

Plants require a location where there is enough light to read a newspaper. With less light than that, even plants adapted to low light conditions will just sit there and produce no new growth. Try moving the plant to a brighter location or closer to the window.

Why won't my plant flower?

Flowering houseplants produce blooms based on two basic plans: 1) those that are called photoaccumulators and 2) those that respond to some type of change of environment (usually the length of the day). The most common types (African violets, peace lilies, antherium, tropical hibiscus, flowering maple) are photo-accumulators. This means they must receive enough light over a long enough period to store sufficient energy to flower.

If low light conditions prevail, they simply don’t accumulate enough energy to maintain normal plant function and flower too. Give these plants brighter conditions and enough time, and they should begin flowering. The second group of plants responds to some environmental signal (Thanksgiving cactus, poinsettias, moth orchids, kalanchoe, amaryllis) and flowers during a particular time of year, according to the changes of the season. Each plant has a specific set of conditions that promote flowering, and if not provided, blooming will not occur. Look up specific information about conditions that trigger blooming for a particular plant.

Check out our Q&A on holiday flowering plants.

Why is my fig tree dying?

This is usually caused by a weak pathogen known as Phomes tip blight. It attacks the youngest twigs of the plant, especially under high humidity conditions. Prune out affected branches, making the cut several inches below the zone of infection. Dip your pruning shears in a 10 percent bleach solution between cuts.

Why are the leaves mottled on the upper surface? 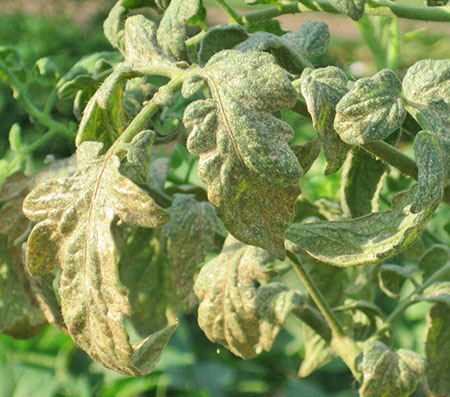 This tomato plant, although not a houseplant, shows the typical signs of mite damage to the leaves.  (Photo courtesy of Don Plunkett.)

It could be mite damage. Mites are a common problem of houseplants. They are favored by warm, dry conditions and hampered by cool, moist, high-humidity locations. Not surprisingly, they are most injurious during the winter heating season or during the summer months.

Most other common spider mites over-winter as eggs on leaves or bark. Cool weather mites such as those commonly found on broad-leaved evergreens and conifers, as well as the southern red mite and European red mite are most active in the spring and fall months. Mites, actually related to spiders with eight legs and the ability to spin webs, represent one of the most common pest problems of houseplants.

These insects feed by scraping their mouthparts across the leaf surface, so plants have a yellow/green-mottled appearance. In severe cases, webbing may be seen. Because they are so small, the only way to detect them is shake the leaf of your houseplant over a white sheet of paper – and if it looks like dust particles are crawling across that paper – it's most likely mites. Spider mites are generally reddish in color.

What's the treatment for most mites?

Spraying with insecticidal soap, the use of ultra-fine horticultural oil, or misting with warm, soapy water helps reduce populations. Because mites increase so quickly, spraying with insecticidal soap twice a week for two to three weeks may be needed for control. Specific miticides are not generally registered for use with houseplants by non-licensed homeowners. Most insecticides are ineffective against mites and can make pest populations worse.

Why are the leaves distorted with the edges curled down?

Cyclamen mite and broad mite are two tiny mites that feed in the growing point of the plant. They cause new leaves to be curled at the edges and twisted. In severe cases, the growing terminal will be extremely distorted. These mites are most common on African violets and English ivy, but they are occasionally found on other plants.

What's the treatment for cyclamen mite?

Unfortunately, they are almost impossible to control, so most people destroy infested plants.

Why do my plants have white globs on the stems? 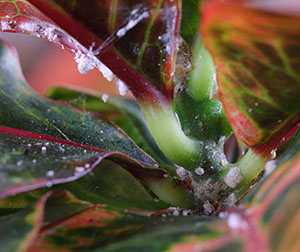 Mealybugs shown on a croton plant.

Mealybugs are small, white insects (usually about the size of a match head) covered with a white, meal-like coating found at the juncture of the petiole and stem. They feed by sucking juice from the stem. Mealybugs are immobile once they reach maturity. White, immature insects often can be seen crawling slowly around on infested plants. They attack a wide assortment of plants but are never found on ferns.

What's the treatment for mealybugs?

A simple method of control is to use an alcohol-soaked cotton swab and physically kill them one at a time. This works when only a single plant is involved, but this method can be a bit tedious for many plants. A fine grade of horticultural oil provides effective control. Make sure to get good coverage when spraying the plant. Systemic insecticides, such as Orthene and Bayer Advanced, can also be used. They are most effective during the summer months when plants are actively growing.

Why is the area around my plant sticky?

Several kinds of scale insects are known, but the brown hemispherical scale is most common on houseplants. It is about 1/16 inch long and shaped like a turtle with a hard shell. It feeds with a piercing-sucking mouthpart and never moves once it begins to feed. The scales are difficult to see and often blend with the woody stems of plants, like ficus or schefflera. The first notice that a pest is present is often the sticky goo on the floor, table or leaves. This goo is called “honeydew” and is the feces of the feeding insects.

What's the treatment for scale insects?

Best control is achieved with the use of lightweight horticultural oil or systemic insecticides, such as Orthene or Bayer Advanced.

Why are there gnats buzzing around my plant?

A common insect associated with houseplants is a small, black, gnat-like insect that buzzes around the soil. This is the adult form of the fungus gnat. The larval stage feeds on organic debris and decaying organic matter found in potting soil.

Another insect, the shore fly, is similar in appearance and activity but is less common.

What's the treatment for the fungus gnat or shore fly?

Fungus gnats are more annoying than harmful, so control is seldom needed for the health of the plant. However, if they become too much of a nuisance, larvae can easily be killed by drenching the soil with an insecticide such as malathion.

Not all insects are created equal so it’s important to know what you are dealing with. Houseplant pests are problematic because they attack a wide array of plants and they thrive in the kind of environment we maintain inside our homes. To prevent pests from entering your home it's recommended to establish a quarantine unit to isolate new plants before bringing them near other house plants.

Still not sure what's going on with your plant?