Walking through the oak woods yesterday I was struck by the abundance of early spring wildflowers brightening up the sunny patches in the woods. Prominent amongst them was rue anemone (Thalictrum thalictroides), one of the common spring ephemerals that disappear as the heat and drought of midsummer takes hold. Later in the morning I stopped by the Botanical Garden and spotter the double, pink-flowered rue anemone “Oscar Schoaf,” a plant I planted about five years ago, in full bloom. 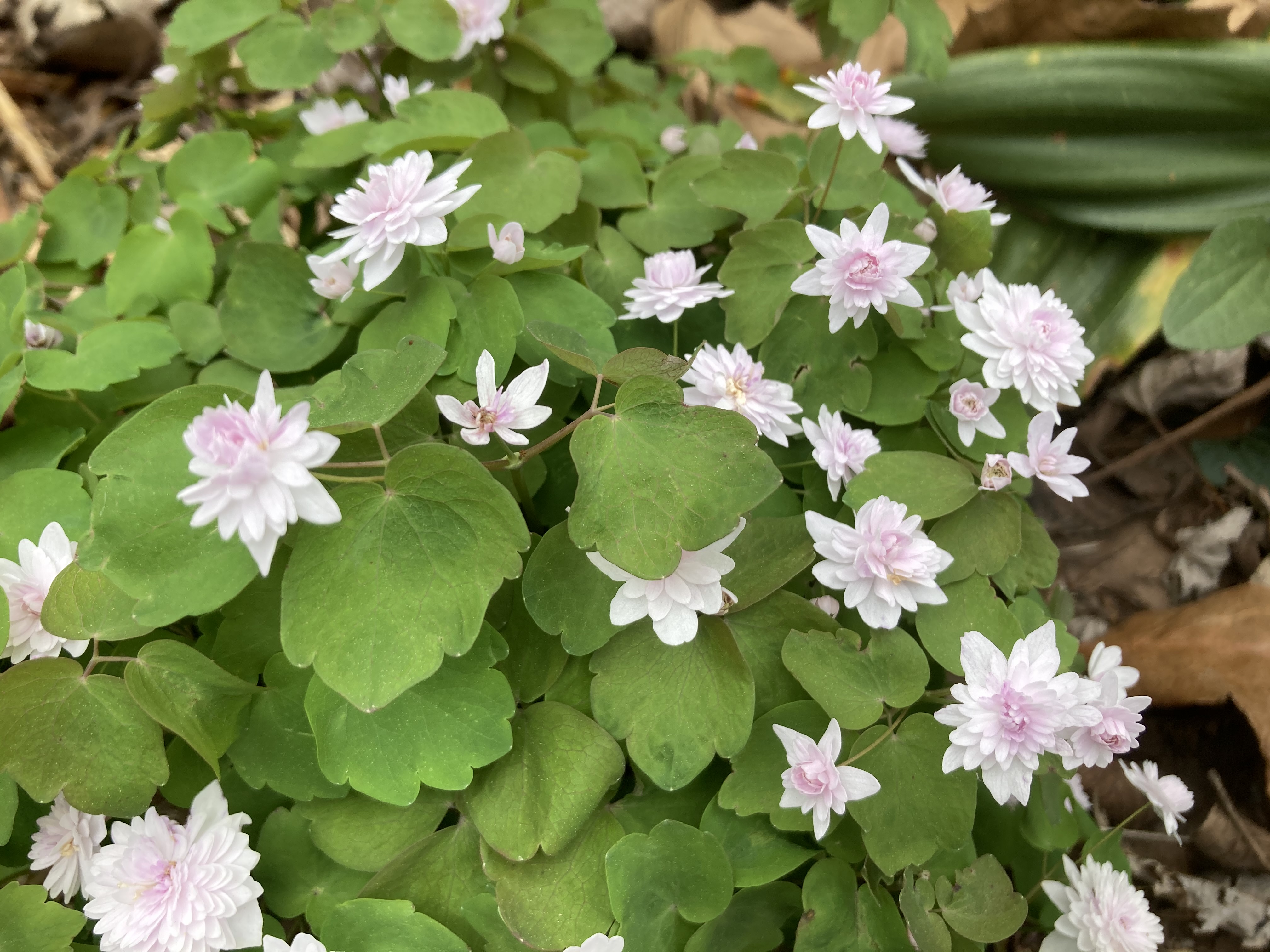 MY GARDEN HAS A FIRST NAME — The double flowered rue anemone is one of our most beautiful wildflower selections and remembers Oscar Schoaf who died over 50 years ago. (Image courtesy Gerald Klingaman.)

Rue anemones form six- to nine-inch-tall clumps of flowers and leaves that emerge from slender, pencil-like tubers early in the spring and disappear below ground in July as conditions get hot and dry. The leaves are compound with usually three, roundish, three-notched glaucous gray-green leaflets forming an open cluster.

The typical flowers are white to light pink and about the size of a quarter. In the wild form each flower has from five to nine petals surrounding a pincushion of yellow-green stamens. In ‘Oscar Schoaf’, the petals are pink and many times doubled, apparently with the many stamens each converted into a petal.

Rue anemone is native throughout the eastern woodlands from Texas to Ontario and points east. It belongs to the Ranunculus family and is in the process of changing its name, though most internet sources still use Anemonella instead of Thalictrum. Linnaeus considered it an anemone, where it picked up that part of its common name. Then in 1839 a botanist decided it was like the vegetable garden rue, but different enough he gave it the name Anemonella where it remained until 1959 when a lumper decided it really should be included with the rues in the genus Thalictrum. DNA testing in the 1990s supports this reclassification, but acceptance has been slow. In a bit of botanical double speak, the Latin name now translates as “a rue anemone that’s like a rue anemone.”

Thomas Jefferson, my favorite president, said in his Garden Book that one of the greatest gifts one could leave behind is to introduce a new plant to the garden. Oscar Schoaf (1909-1966) did that. I have not been able to find anything about Mr. Schoaf other than that he is buried in Owatonna, Minnesota and is said to have found the double flowered form growing in a cemetery in the southern part of the state. Maybe that is enough. A small, flat headstone in a cemetery and a pretty plant bearing his name that is offered by rock garden nurseries around the world.

As a spring ephemeral, the double flowered rue anemone should be grown in dappled light in a site that will remain undisturbed during its dormancy period from mid-summer until early spring. It grows best in a rich, organic acidic soil, but most of the Arkansas sites where I find rue anemone growing have heavy, often clayey soils but with good drainage. The double form is slow to expand but after a few years can be divided just as the foliage begins to die away in the summer.

For more information about horticulture or to see other Plant of the Week columns, visit Extension’s Website, www.uaex.edu, or contact your county extension agent. The Cooperative Extension Service is part of the U of A Division of Agriculture.

Each week since 1997, Dr. Gerald Klingaman has offered readers a unique window as he chronicles of the social history of plants.

"What always interested me was the background of the plants and how they got there and the people involved in bringing them forward," he said.

Klingaman, a retired extension horticulturist who is now operations director for the Botanical Garden of the Ozarks in Fayetteville, Arkansas, has created is a library of hundreds of plant histories that run in newspapers across the state and have become a favorite of gardeners in Arkansas and beyond. We hope you'll enjoy our extensive archive of his works and return each week to see what's new.