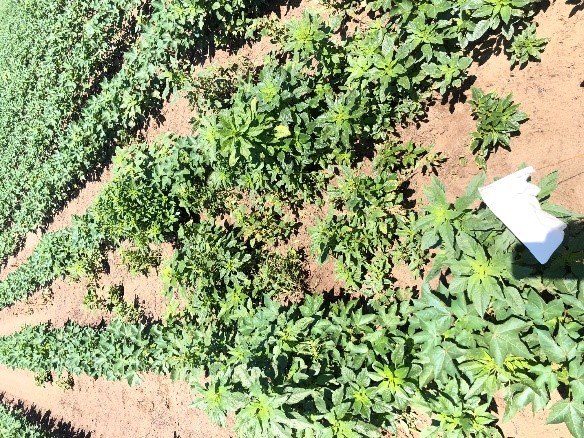 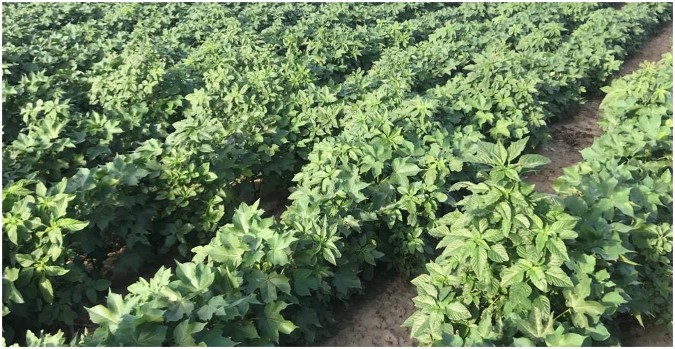 Last summer an article was written about two fields of concern in Mississippi County where three applications of glufosinate failed to control Palmer amaranth.  Upon first observation of these fields, a familiar sinking feeling started to appear.  These left-over pigweed plants were in only a few spots (Figure 1) across each field and appeared to be the result of seed from a surviving mother plant the year before.  Usually, if resistance is occurring it will be in small spots across the field or in a combine pattern from harvest the year before.  These two fields had that “look” and were very suspicious to say the least.

Areas of live plants were flagged in each field, and as stated in the earlier post, plants were soaked with 2% solution of Liberty and evaluated ten days later.  At time of evaluation, few plants were dead in the area that had been sprayed earlier. Seed was collected from both field sites from matured plants for screening in the greenhouse over the winter in Fayetteville, AR.

Dr. Jason Norsworthy’s weed science program at Fayetteville, AR has evaluated both samples from Mississippi County along with another sample collected the previous year from Crittenden County (Figure 2).  Initial greenhouse experiments involved a rate response study to evaluate glufosinate effectiveness on these samples.  Initial results indicated that 32 fl oz/A Liberty (glufosinate) was not providing control in the greenhouse and furthermore survivors were present following applications up to 256 oz/A (Figure 3).

The “official” screening process to confirm resistance involved a glufosinate rate titration where several rates (up to 16X the labeled rate of 29 oz/A) of glufosinate were sprayed on the populations in question and compared to a known susceptible population of Palmer amaranth.  Results are disheartening to say the least.  As observed in Figure 4, a standard field rate of Liberty at 29 oz/A provided very little if any control of these samples from Mississippi County, but easily controlled the susceptible standard.  To make matters worse, 20% survival was noted with a 2X (58 oz/A) rate with 5% surviving a 16X rate of glufosinate in one population (Figure 4). 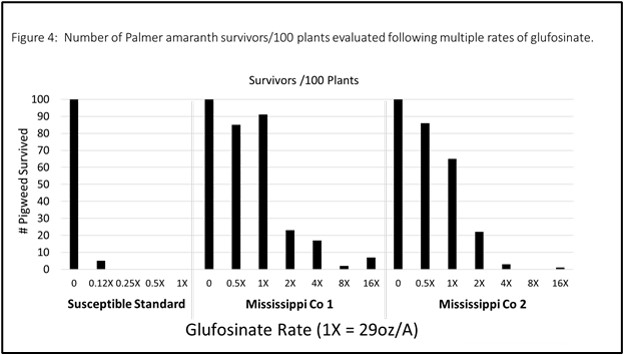 Based on a LD50 curve, which is the lethal dose needed to kill 50% of the population, and compared to a susceptible standard, the biotype from Crittenden County is 3.5 times less sensitive to glufosinate (Figure 5).  Rate titrations are continuing on the Mississippi County populations but at this time they appear to be at least 15 times more resistant than the susceptible standard used for evaluation in the screening. 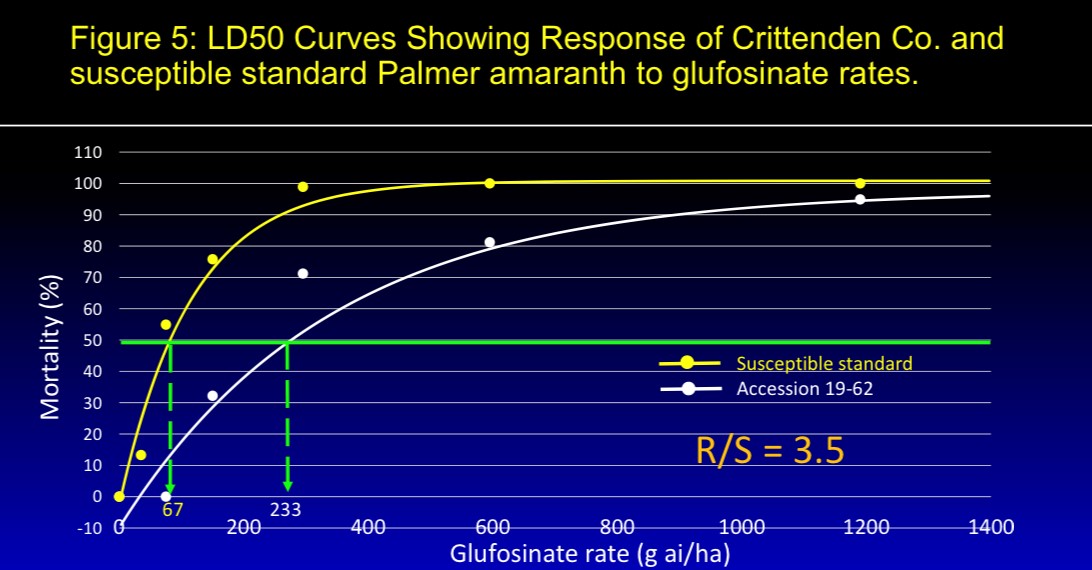 This finding will represent the first documented case of broadleaf resistance to glufosinate herbicide in the world.  It is not a big surprise that Palmer amaranth has developed resistance to glufosinate considering the history.  Cotton producers have heavily relied on glufosinate since 2007, where widespread occurrence of glyphosate (Roundup) resistance was present in pigweed populations across this geography.  Twelve or more years of selection pressure due to glyphosate resistance in Northeast Arkansas has placed tremendous stress on several key herbicide modes of action including glufosinate.  Further testing is currently underway to determine if there is multiple-resistance to other herbicide modes of action in these three populations.  Currently, this problem does not appear to be widespread across Mississippi and Crittenden county or the Northeast, Arkansas area based on extensive screenings that have been taking place in this geography.  Although it stands to reason that several other fields likely contain small segments of the Palmer amaranth population that has reduced sensitivity to glufosinate.

Special care should be taken in the future to remove any escaped pigweed populations prior to seed set, regardless of crop grown in the field.  In addition, we are recommending that these fields be rotated to corn if possible due to the herbicide alternatives available in a corn production system.  These populations have also been screened with dicamba (Engenia).  At this time, it appears dicamba has good activity on two of the three glufosinate-resistant populations.  Growers who will not rotate from cotton or soybean, should strongly consider the Enlist system as a technology rotation because Enlist One plus glufosinate continues to provide the most consistent control of emerged Palmer amaranth following a single application.  Applying multiple residuals at planting such as Brake + Cotoran in cotton or metribuzin + Group 15 (Anthem/Zidua, Dual Magnum, Outlook etc.) in soybean is HIGHLY recommended, regardless of the technology planted, as well as overlapping group 15 residuals POST to reduce Palmer amaranth emergence throughout the season. Unfortunately, all of these suggestions are short-term solutions.  A long-term solution for pigweed control in Arkansas will require multiple cultural tactics including deep tillage, cover crops, crop rotation, hand weeding and harvest weed seed control to reduce selection pressure from current herbicides and increase focus on pigweed seed bank reduction.   Our neighbors in Tennessee have identified dicamba-resistant pigweed and it stands to reason scattered populations also exist in Arkansas.  There is currently now more than ever a dire need for development of a new herbicide mode of action for pigweed control in Arkansas.