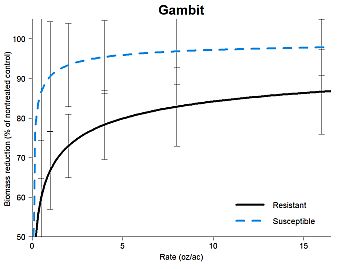 Smartweed species (Persicaria spp.) have been reported as important weeds to manage in Midsouth rice acres (Norsworthy et al., 2013). Acetolactate synthase (ALS)-inhibiting herbicides have become the go-to options for successfully managing these species postemergence in rice (Barber et al., 2021). The heavy reliance on ALS-inhibitor chemistries for smartweed control in rice resulted in a population of Pennsylvania smartweed [Persicaria pensylvanica (L.) M. Gomez] from southeast Missouri being previously confirmed ALS-inhibitor-resistant (Varanasi et al., 2018). No such resistance has been confirmed in Arkansas; however, recent suspicions and reports of suspected ALS-inhibitor-resistant smartweed have begun to emerge. As a result, the objective of this research was to perform a dose response experiment on a suspected ALS-inhibitor-resistant (Jackson County, AR) and susceptible (Lonoke County, AR) Pennsylvania smartweed population. 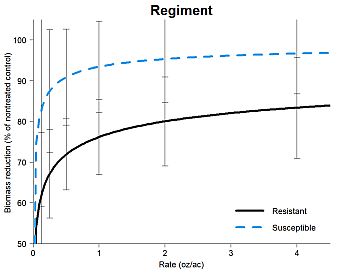 Greenhouse dose response experiments were conducted in the spring and summer of 2021 at the Lonoke Extension Center located near Lonoke, AR to assess if ALS-inhibitor-resistant Pennsylvania smartweed was present within the state. Two Pennsylvania smartweed populations (one suspected resistant population from Jackson County, AR, and one susceptible population from Lonoke County, AR) were subjected to various rates (0.25x, 0.5x, 1x, 2x, 4x, and 8x of a label rate) of two ALS-inhibiting herbicides [bispyribac-sodium (Regiment) and halosulfuron + prosulfuron (Gambit)]. The 1x label rates used for Regiment and Gambit were 0.5 and 2 oz/ac, respectively, and appropriate adjuvants were included in each treatment as indicated by the herbicide labels. Treatments were sprayed using a single-nozzle research track sprayer (DeVries Manufacturing) calibrated to deliver 10 gallons/ac using an XR110015 EVS nozzle. A minimum of 3 replications (plants) were evaluated per run and 2 separate experimental runs were conducted. At 28 days after treatment, plants were harvested and weighed for aboveground biomass measurements. Biomass data were standardized compared to the nontreated control and analyzed using the dose response package (drc) in R v4.0.3 (Ritz et al., 2015). Three parameter log-logistic regression curves were fit to the data with maximum values fixed at 100.

Fig. 3. Dose response of suspected ALS-inhibitor resistant smartweed from Jackson County, AR 28 days after treatment of bispyribac-sodium (Regiment) and halosulfuron + prosulfuron (Gambit). The 1x rate for Regiment and Gambit was 0.5 and 2 oz/ac, respectively.

Results of the greenhouse dose response study indicate the Jackson County, AR Pennsylvania smartweed population to be between 5 and 10-fold resistant based on the estimated dose to reduce biomass by 50% (ED50) and between 38 and 60-fold resistant to reduce biomass by 90% (ED90) for both Gambit and Regiment (Table 1). Dose response curve figures for both Gambit (Fig. 1) and Regiment (Fig. 2) illustrate the reduced control observed with each ALS-inhibiting herbicide on the Jackson County population compared to the Lonoke County susceptible. This is also demonstrated in the images taken from the greenhouse experiment for the resistant (Fig. 3) and susceptible (Fig. 4) populations at 28 days following the application. To successfully control the Jackson County Pennsylvania smartweed population (reduce biomass 90%), it would require a 34.6 and 24.4 oz/ac rate of Gambit and Regiment, respectively, which is approximately 17 and 48 times more than labeled rates of each herbicide, respectively (Table 1). 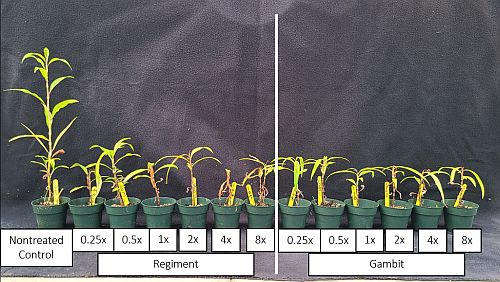 Fig. 4. Dose response of susceptible smartweed from Lonoke County, AR 28 days after treatment of bispyribac-sodium (Regiment) and halosulfuron + prosulfuron (Gambit). The 1x rate for Regiment and Gambit was 0.5 and 2 oz/ac, respectively.

This research confirms the existence of ALS-inhibitor-resistant Pennsylvania smartweed within Arkansas. Additionally, as the Jackson County population was confirmed resistant to both Regiment and Gambit, this demonstrates the resistance is present across different chemical families within the ALS-inhibitor site-of-action. This can be extremely problematic for rice producers within the state as it effectively removes an entire site-of-action available for the control of Pennsylvania smartweed. Remaining options would include Basagran at 2 pt/ac, propanil at 4 qt/ac, and Aim at 1.25 fl oz/ac. However, as all of these are contact herbicides, adequate coverage and applying when smartweed is small (~4 inches in height) is a must for successful control. Sequential applications of these herbicides will also often be required for complete control.

If you have smartweed or other problematic weed concerns in your field crops, please don’t hesitate to get a hold of us. Good luck out there!