Prussic acid or nitrate toxicity can kill animals in a matter of hours, so it is important to understand the conditions that cause buildup.

What are the signs of nitrate poisoning in cattle?

The most likely signs of nitrate poisoning are:

Observe animals closely for signs of toxicity, and call a veterinarian immediately if symptoms occur.

How do you treat nitrate poisoning in cattle?

How can I prevent nitrate poisoning in my cattle?

What causes nitrate to accumulate in plants?

Any stress condition which causes an abrupt decrease in plant growth may contribute to plant nitrate accumulation, even with a normal nitrogen supply. Some of these conditions are:

Have your forages checked!

Nitrates will persist in the grass when hayed. Prussic acid does not. If considering cutting for hay, think about doing a nitrate test first, especially if field received heavy N fertilization.

Nitrate forage testing is a $6 service offered by the University of Arkansas Diagnostic Lab.

If you have questions or need a test contact your county extension agent.

*Note: Unfortunately there are no reliable tests for prussic acid in forages because the levels can change so rapidly after taking a sample.

What are the most common signs of prussic acid poisoning in cattle?

*Hydrocyanic acid (HCN) or prussic acid is generally found in stressed plants and is formed by enzymatic action on compounds called the cyanogenetic glucosides (dhurrin) when growth is adversely affected.

What is the treatment for prussic acid poisoning?

Get the animals off the pasture they're grazing. Contact your veterinarian immediately. Animals affected by prussic acid poisoning may be treated with a sodium nitrite-­sodium thiosulfate combination. It must be injected intravenously and very slowly. The dosage and method of administration are critical. Prussic acid poisoning from hay is very uncommon.

Consult a veterinarian immediately to correctly diagnose prussic acid poisoning and to determine the proper treatment.

What is the relationship between prussic acid and nitrate poisoning?

Prussic acid poisoning is most commonly associated with johnsongrass and sorghum-sudangrass. Pearl millet and corn do not produce prussic acid. Under certain stressful conditions (especially prolonged drought or cool, cloudy weather), these grasses may produce prussic acid or accumulate high levels of nitrates in their stems. There is little or no relationship between prussic acid and nitrate poisoning. However, HCN poisoning is often confused with nitrate poisoning since environmental conditions and animal symptoms of the two disorders are somewhat similar

How to Prevent Prussic Acid Poisoning 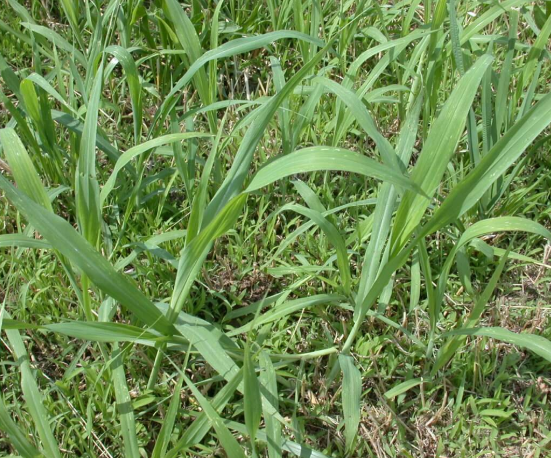 Johnsongrass (pictured above) is a warm-season perennial grass found statewide in Arkansas. It is often a weedy invader in other forages. It can cause prussic acid poisoning when wilted from frost or drought. It can accumulate toxic levels of nitrate if over-fertilized with nitrogen or litter.

The amount of HCN found in plant tissue varies among species. Of all the plants grown in Arkansas, those belonging to the sorghum category are most likely to contain potentially toxic levels. Grain sorghum contains the most, followed by johnsongrass, sorghum-sudan hybrids and then sudangrass.

However, johnsongrass may be the plant of most concern since it grows wild throughout the state and infests many pastures. Johnsongrass commonly has problems with nitrate accumulation. Prussic acid can also build up in stressed johnsongrass, much like nitrates.

Millet is free of prussic acid. HCN may be produced by a few other plant species. Wild cherry trees can produce toxic levels, and HCN poisoning occurs most often when animals consume wilted leaves after trees have been damaged by storms or pruning.

Signs of toxicity in Johnsongrass

Unfortunately, there's no hard and fast rule on when to graze or not graze it. Despite common belief, there's no real visual symptoms of toxicity. That white powdery stuff that gets on the leaves is most likely the fungal disease, powdery mildew, which is unrelated to prussic acid or nitrates.

For more information about preventing nitrate and prussic acid poisoning