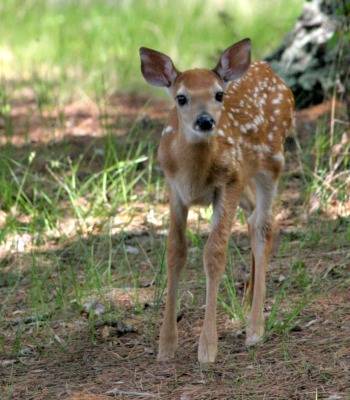 ABANDONED? -- Probably not. It is illegal to take deer from the wild and keep them as pets in Arkansas. (Image courtesy Paul Bolstad, University of Minnesota, Bugwood.org.)

What should you do when finding orphaned, injured or sick wildlife?

For the majority of cases, this is the best possible solution.  Young animals are rarely abandoned by their parents.  Young animals starting out on their own may appear helpless, but this is a normal stage of development.  Some animals can take care of themselves shortly after they are born, while others require more intensive care.

If an animal’s nest has been disturbed, for example by cutting a tree or pruning a shrub, fashion a new nest and leave the orphan in a place where the mother can find it.

If the animal appears sick, do not go near it.

Animals which are stressed or overcome with illness can be dangerous. Rabies is a fatal disease for animals and people. If a bat is found on the ground and appears disoriented, do not touch the bat. Or if a skunk is visible during daylight hours and acting strangely or aggressively, do not approach. Contact your local wildlife officer, animal control agency, or sheriff department for assistance, and keep watch until they arrive.

Don't care for it yourself.

Bringing a wild baby animal into your home to care for is probably the worst thing you could do.  In most cases, the animal’s parents are nearby, waiting for you to leave.  There is a good chance that it does not need your help.  Caring for wildlife requires an exhaustive amount of attention and commitment.  Often these animals require species-specific housing, nutrition and handling.
Resist the temptation to provide unnecessary care. Bottom line is, humans cannot do as good a job as the real parents.

Can you keep native wildlife captive in Arkansas?

In Arkansas, a resident can keep certain native wildlife species as pets.  Arkansas Game and Fish Commission allows individuals to keep up to six animals which have been hand-captured and are native to Arkansas.

These include bobcats, coyotes, gray foxes, red foxes, opossums, rabbits, raccoons or squirrels. It is also legal to keep hand-captured native non-game wildlife such as certain turtles, snakes, and lizards.

What wildlife is illegal to keep in Arkansas?

It is illegal to keep native deer, birds (such as songbirds, hawks, and owls), bats, ornate box turtles, alligator snapping turtles, hellbenders, Ouachita streambed salamanders, collard lizards, cave-dwelling creatures or endangered species. Note that laws change periodically.  If you have questions, contact your local wildlife officer, or find the law in the code of regulations.

It is illegal to take white-tailed deer from the wild and keep them as pets.  The law allows for those deer captured before June 30, 2012 to be kept until their death. These captive white-tailed deer may not be sold or transferred to a different owner and may only be taken from the state with the permission of the Chief of Wildlife Management.

If an animal is taken from the wild as a pet, it must be cared for by the person taking them in for the life of the animal, or turned over to a permitted wildlife rehabilitator for release back into the wild. These animals must be kept in separate pens by sex, or the males must be neutered, to prevent reproduction. The animals must be caged in a way that prevents them from escaping and other wildlife from entering. Additional rules and regulations about captive wildlife are available on the Arkansas Game and Fish Commission’s website. 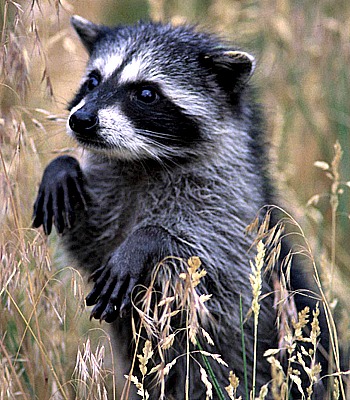 CUTE FOR NOW -- Wildlife raised by humans often lose their fear of people, which could be a problem later in life.  (Image courtesy Terry Spivey, USDA Forest Service, Bugwood.org.)

If the animal runs away from you or tries to defend itself, it probably does not need help.  Signs that an animal requires help are if it appears sick (such as glazed eyes, fly eggs, fire ant bites, matted fur or ruffled feathers), visible cuts, cold body temperature, twisted or limp limbs and weakness.

Before taking the animal to the wildlife rehabilitator, do not try to give the animal any food or water.  This could be harmful.  Some animals have specialized diets that change as they mature and by the time of year.

Acknowledgments: Some information for this webpage was adapted from What to do about Orphaned, Injured and Sick Wildlife by Dean Easton, Leslie Straub, and Joe Schaefer, Florida Cooperative Extension Service.