We are conducting detailed telephone interviews of landowners who are receiving assistance from Conservation District feral hog technicians about their feral hog damages. To schedule an interview, simply select a date and time which is convenient for you!

How to Get Rid of Feral Hogs

Feral hogs (Sus scrofa) are everywhere in Arkansas. These non-native invaders likely escaped from a farm or were released for sport hunting. After a generation or two, progeny of a domesticated hog appear untamed, with thickened fur and tusks. Sows produce an average six piglets per litter when 8 to 13 months of age,with 1 to 2 litters per year, for a lifespan of 5 to 8 years. Other than hunters, research indicates feral hogs have few predators once past 10 to 15 pounds. 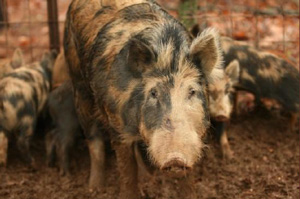 Although small herds of feral hogs have lived in Arkansas for generations, the feral hog population in the state has increased and expanded dramatically since the 1990's. Controlling the prolific feral hog has proven difficult. Feral hogs are very adaptive and learn to avoid hunters and traps. Hogs are very mobile, and will range for miles in search of food and mates. Most feral hogs are nocturnal, and therefore often unseen until signs appear. Signs of feral hogs are rooting, tracks, wallows, nests or beds, tree and post rubs.

Watch a video clip of a feral hog wallowing

Who to call for help with feral hogs

USDA – Wildlife Services offers assistance to private landowners statewide experiencing feral hog damage. They have a number of employees dedicated to assisting landowners with trapping and removing feral hogs, and in some instances aerial shooting. To request assistance with feral hogs on your property, call Robert Byrd at 501-835-2318.

#2. Other agencies and organizations:

None of the following methods for removing feral hogs have proven 100% effective, though corral trapping is recommended as the most efficient for removing large numbers. Using several strategies, for example corral trapping followed by night shooting and dog-hunting stragglers, could be your best option for achieving population reduction. Each situation is unique. Contact the agencies listed above, or your local County Extension Agent, to discuss your particular circumstance. 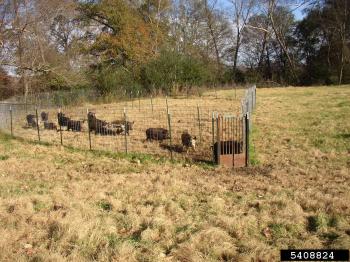 Additional details are available from resources below.

For more information about feral hogs, local trapping demonstrations, upcoming workshops, or having a workshop in your community, contact your local county Extension office.

What are Arkansas laws about feral hogs?

For details about feral hog laws, contact the Arkansas Game and Fish Commission or read the fact sheet Laws and Regulations Governing Feral Hogs in Arkansas.