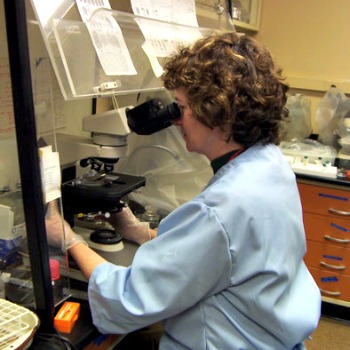 Wildlife contract diseases and illnesses, most of which are not transmitted to people.  Wildlife diseases which pose a health and safety concern are:

Through supplemental feeding, sometimes humans unintentionally create environments which facilitate transfer of wildlife diseases and wildlife deaths.  Such toxicoses are: 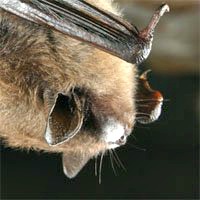 The Veterinary Diagnostic Lab at the University of Arkansas Experimental Station in Fayetteville provides reliable, consistent and timely results for animal disease diagnostic services, health monitoring programs, and authorized USDA testing programs. Testing services are available for poultry and mammals for a fee.

The Arkansas Livestock and Poultry Commission's Veterinary Diagnostic Laboratory in Little Rock charges a fee for each type of test, and has specific requirements regarding collection and shipment of deceased animals to undergo necropsy.  Check their website or call the laboratory for information and testing fees at 501-907-2430.

The Southeastern Cooperative Wildlife Disease Study has conducted diagnostic tests on wildlife since 1957 to (1) detect causes of sickness and death in wildlife, (2) define the impact of diseases and parasites upon wild animal populations, (3) delineate disease interrelationships between wildlife and domestic livestock, and (4) determine the role of wildlife in transmission of human diseases.  SCWDC works primarily with state wildlife agencies to monitor wildlife diseases in the south.

Black bears and alligators – Black bears and alligators will typically flee from people, but can become dangerous when an individual animal gets accustomed or habituated to humans who intentionally or unintentionally feed them.  It may seem fun and dangerously exciting at the time to feed bears or alligators by hand, but once a predator loses its fear of humans, chances of an attack increase significantly.  Keep trash cans secured and feed pets indoors to avoid such encounters.

Venomous snakes – The majority of snakes in Arkansas are non-venomous.  Human deaths resulting from snake bites are rare, in part because of advances in medical treatments.  If bitten by a venomous snake, immediately seek medical attention.

Coyotes and bobcats - Although feared, attacks by coyotes and bobcats are extremely rare, though small pets can become easy prey.  Where coyotes are prevalent, keep pets indoors and supervise young children (e.g., toddlers) as a precaution, especially at dusk, to avoid an attack.

Mountain lions (also called cougars) – Occasionally, evidence of mountain lion attacks on livestock are reported, but no attacks on humans have occurred in Arkansas.

Feral hogs – Although they look ferocious, feral hogs or wild pigs rarely attack humans.  Those rare instances when they have attacked are when cornered or injured. 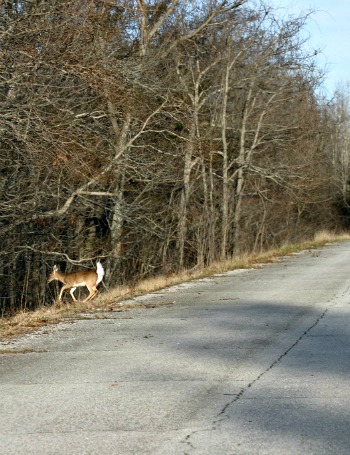 Collisions with large species such as deer, elk, black bear, and alligators can result in economic loss and on rare occasion, death to people.  Many human deaths associated with wildlife-vehicle collisions occur when the driver attempts to avoid the collision and instead runs into an immovable object.

If wildlife should cross a roadway,

A study about deer –vehicle collisions in Arkansas reported such accidents “are a very visible negative consequence of an increasing human population combined with an abundant population of white-tailed deer (Tappe 2005).