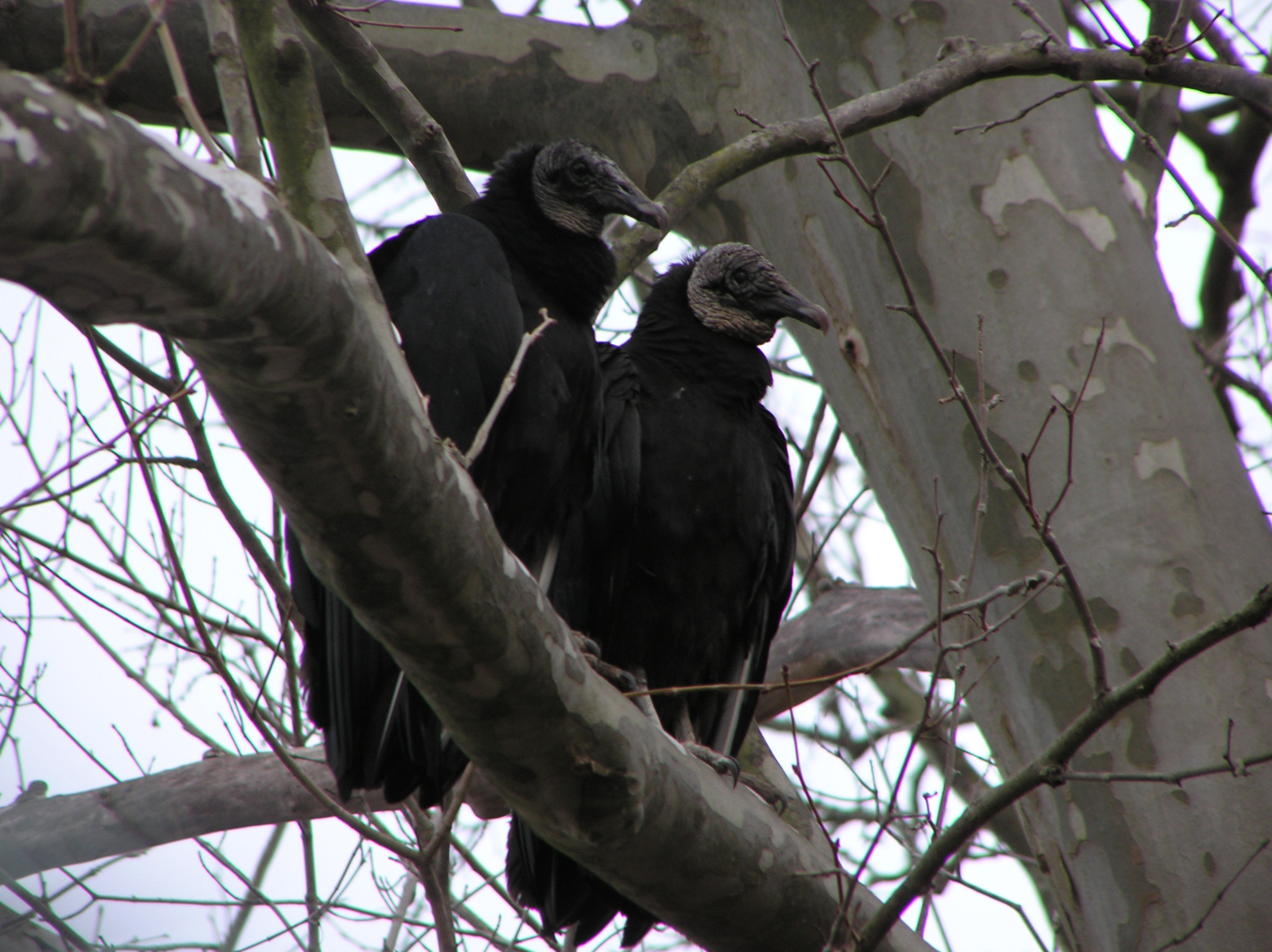 HANGING OUT -- Black vultures are increasing in population and their aggressive nature is causing problems for livestock producers in Arkansas.  (Image courtesy Charles H. Warren, NBII.)

Vultures play a critical role in the environment as scavengers of carrion. Unlike their less-aggressive cousin the turkey vulture, black vultures are known to gang up and prey on living calves, piglets, lambs, and newborn goats. They sometimes attack vulnerable cows while ill or giving birth.

Legally black vultures are protected under the federal Migratory Bird Treaty Act of 1918. Their migratory range extends for thousands of miles from North America to the lower reaches of South America, thus crossing national boundaries. It is illegal to harm, harass, or take (kill) black vultures without a permit.

Residential issues. Black vultures sometimes peck and damage rubber seals and windshield wipers on parked vehicles, canvas awnings and seating on boats, and rubber or vinyl materials on rooftops. Property damage and droppings are an issue for some homeowners, while others consider them “peace eagles” and a tourist attraction.

Depredation to livestock. Black vultures leave characteristic evidence of their depredation. The United States Department of Agriculture (USDA) reports black vultures can inflict gruesome damage to livestock. They pluck eyes and eat tongues of newborns, down, or sick livestock; disembowel young livestock; kill and feed on domestic fowl; and leave scars on those animals which survive.

Although black vultures prey on livestock, the actual number of attacks is difficult to determine. It is believed many such incidents go unreported. Sometimes determining whether black vultures are the culprit can be difficult to prove. Stillborns and incapacitated animals are easy prey for a number of predators and scavengers. 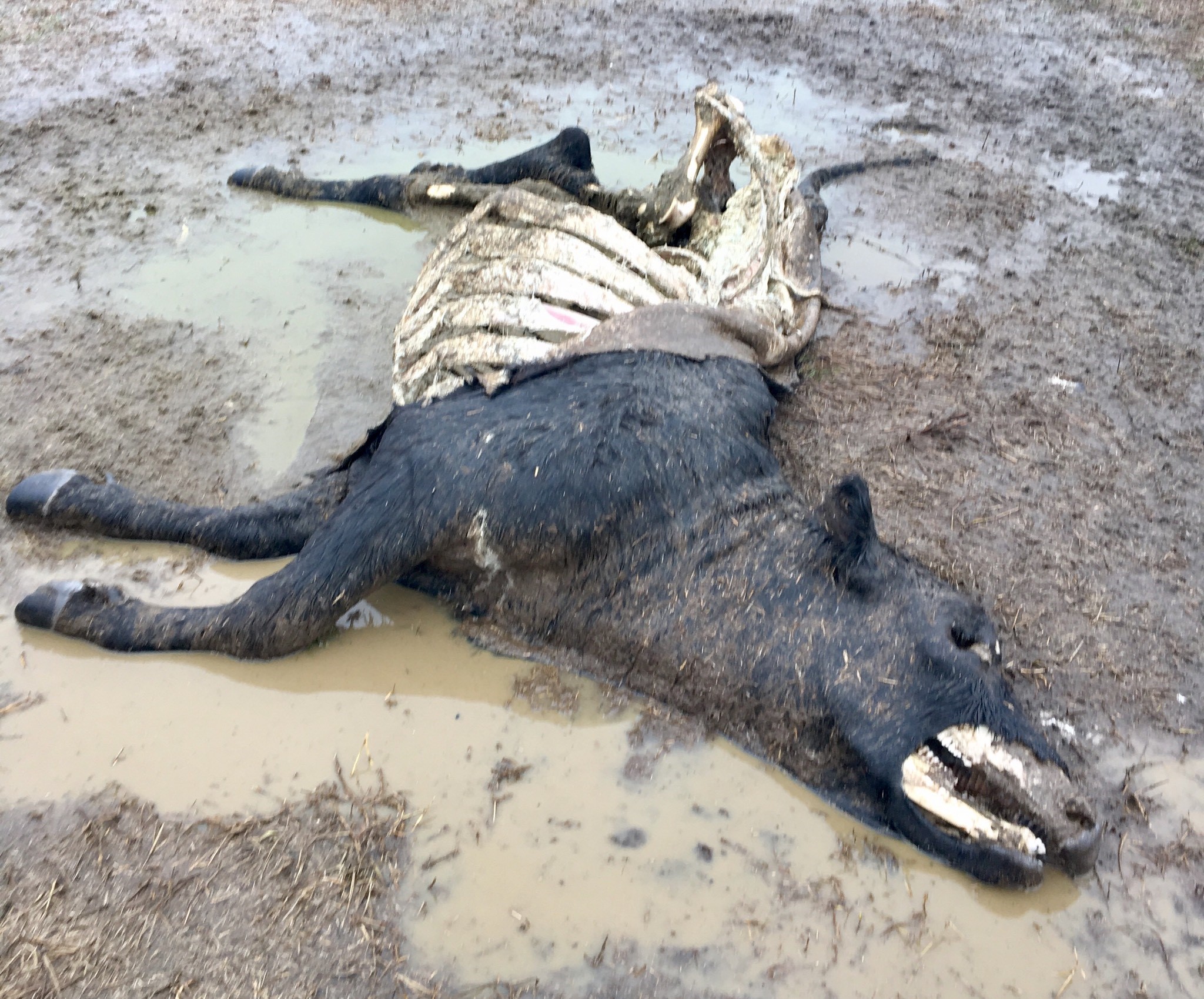 Black vultures use visual cues for finding food sources. They drive away predators or scavengers by sheer numbers and an aggressive nature, obscuring what actually caused the animal's demise.

Regardless, the presence of black vultures on farms is an issue for livestock producers. Black vultures are known to take livestock when given the opportunity. The USDA Animal and Plant Health Inspection Service - Wildlife Services is charged with responding to conflicts with migratory species including black vultures.

How to get a permit

An additional two birds can be taken upon request. The USDA partnered with the Arkansas Farm Bureau by issuing a limited number of permits for distribution to those experiencing livestock depredation. Certain rules must be followed which include hanging removed birds as effigies.

A document describing guidelines for using effigies to disperse nuisance vulture roosts is available for download. All permittees must report their takes to the Arkansas Farm Bureau. The permit is valid from January - December of the calendar year. No other bird species are authorized to be taken under this program.

From start to finish, this process can take 2 to 3 weeks, so USDA Wildlife Services should be contacted without delay. The $100 permit is issued for a calendar year from January - December. If lethal removal is deemed necessary, the number of birds permitted for removal depends on several factors including the estimated local population of black vultures.

Black vultures that have been allowed to occupy a roost for an extended time are more difficult to drive away. For established roosts, USDA Wildlife Services recommends using laser pointers or pyrotechnics. Lasers can be a hazard for low flying airplanes, therefore proper authorities should be consulted. Types of pyrotechnics are a starter pistol (like those used in races), shell crackers fired from a 12-gauge shotgun, or propane cannons which periodically emit a loud boom. In urban and some rural locations, nearby residents would need to tolerate loud noises produced by such devices.

Pyrotechnics may disturb livestock especially during the birthing season. Federal, state, county, and local laws should be consulted before using lasers or pyrotechnics.

A federal permit is NOT required for using lasers or pyrotechnics to scare black vultures and other migratory birds in Arkansas.  However, federal laws may disallow using lasers near airports and flight paths.

Using vulture replicas as a deterrent

Livestock producers can discourage black vultures by penning expectant cows, goats, and sheep near human activity. This enables closer scrutiny of an expectant animal and a quicker response to problem situations, thereby improving a young animal's survivability. Some producers have success with livestock guard dogs which can frighten, chase, or attack coyotes, domestic dogs, feral hogs, black vultures, and other potential predators.

When proof of black vulture depredation is obtainable, producers can apply for reimbursement through the Livestock Indemnity Program under the USDA Farm Service Agency (FSA). There must be strong evidence of vulture depredation including authentication by a date-stamped photo or video. Also required is documentation of livestock ownership through purchase or other means. A local FSA committee determines whether there is enough evidence to warrant reimbursement, which can be up to 75% of the average fair market value of livestock lost. For additional information, contact Arkansas FSA at 501-301-3000 or your local USDA Service Center.